My direct drive '80 SH with the 160cc engine on it is geared so high and has so much compression it can’t be push started the traditional way.

There are only a few ways to start the beast, all pretty inconvenient:

Option #3 is a no go. The kart right now is mega competitive and lapping really close to TAG laptimes, while still topping out at 78 MPH on the back straight. I don’t want to sacrifice it’s unique fun factor otherwise what’s the darn point.

I can always rely on Option #1, but I don’t want to risk damaging other people’s bumpers and clutches.

Option #2 is generally my go-to solution but is getting harder to rely on, since the track is getting (THANKFULLY) much busier then in the last few years.

… Which brings me to this build thread. I will build a rocket launch-inspired driver-controlled Booster for starting that damn kart.

It will be made up of a period-correct 5 horse Briggs flathead with a high engagement clutch mounted on top of a single, super wide dirt kart slick. That in turn will be hooked up to a simple 1" axle + bearing pillow block setup with low gearing and a simple to operate friction brake setup.

The front of the assembly will have a bumper setup which will bump start the kart by contacting the framerails. Two small front casters will keep everything stable. An upper support will hold against the upper bumper bar so it can leverage the torque rotation of the assembly to help offload the rear axle.

I assume traction will be an issue since it is a 30-50 lb. pusher setup trying to push against 300+ lbs of kart and driver, but we’ll have to find out. Will update with schematics and pictures soon.

Some pictures from the stuff I’ve bought so far for this project: 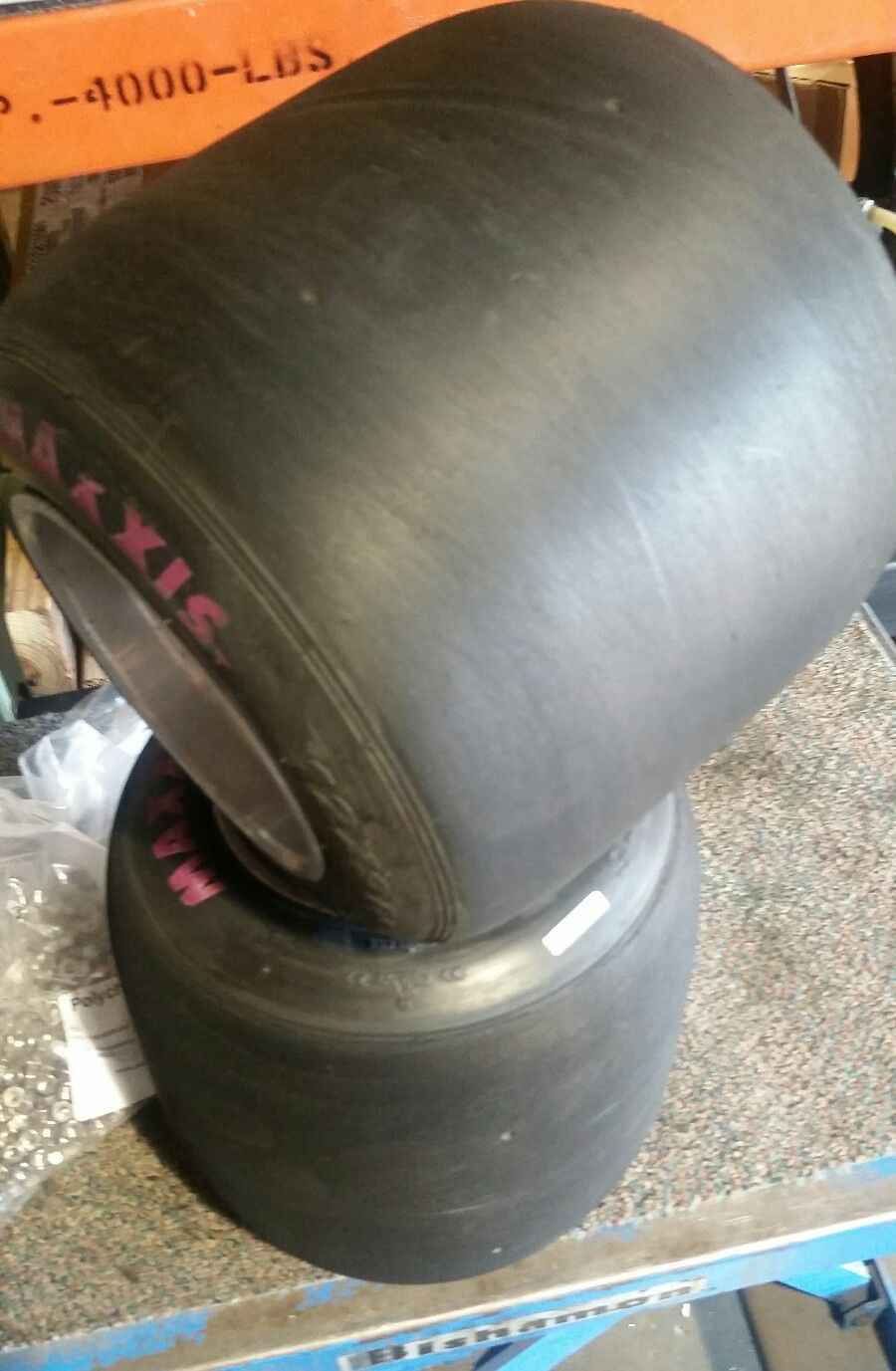 Dirty, but cheap and very much running Briggs Flathead 5HP. With clutch! 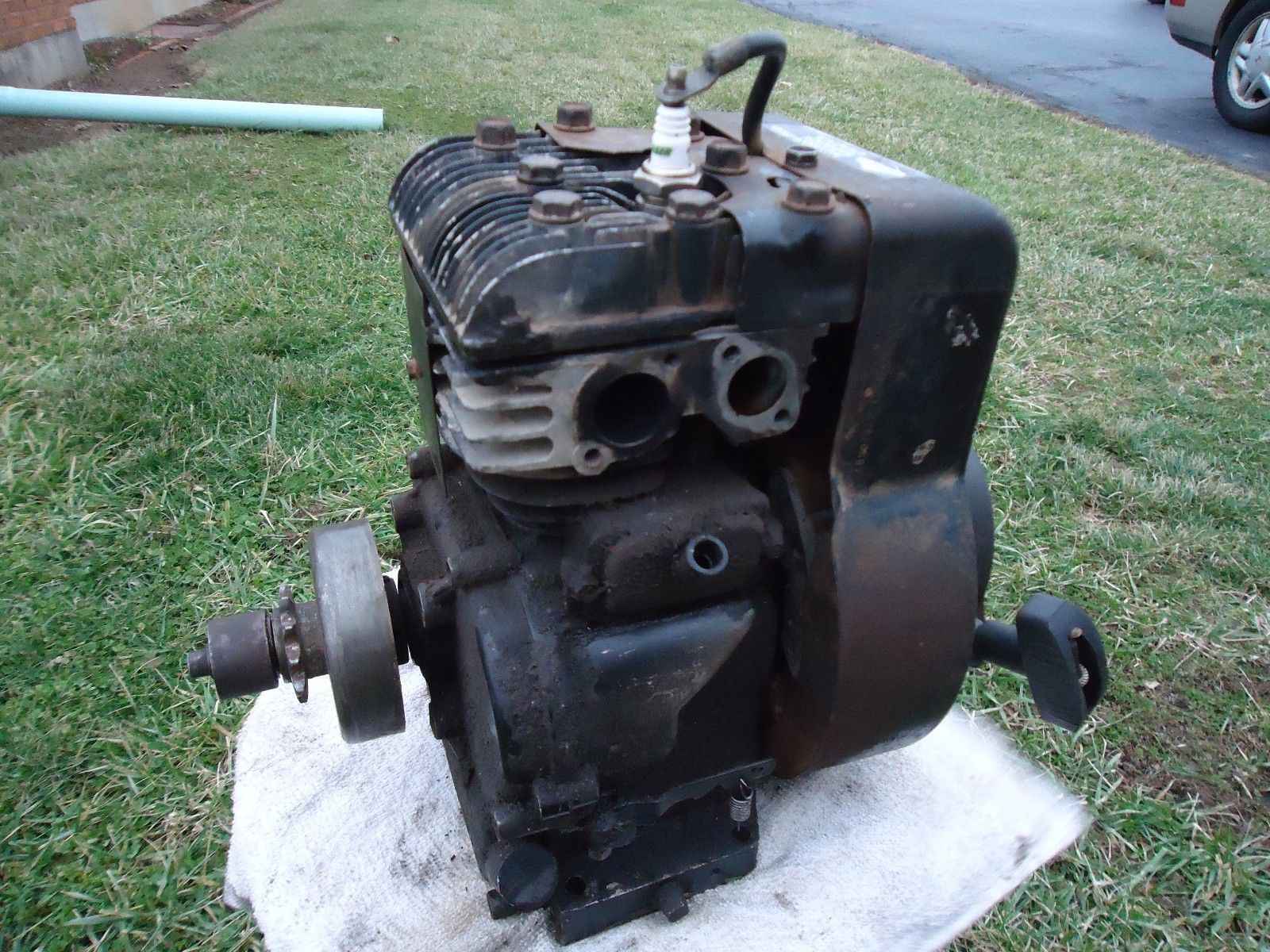 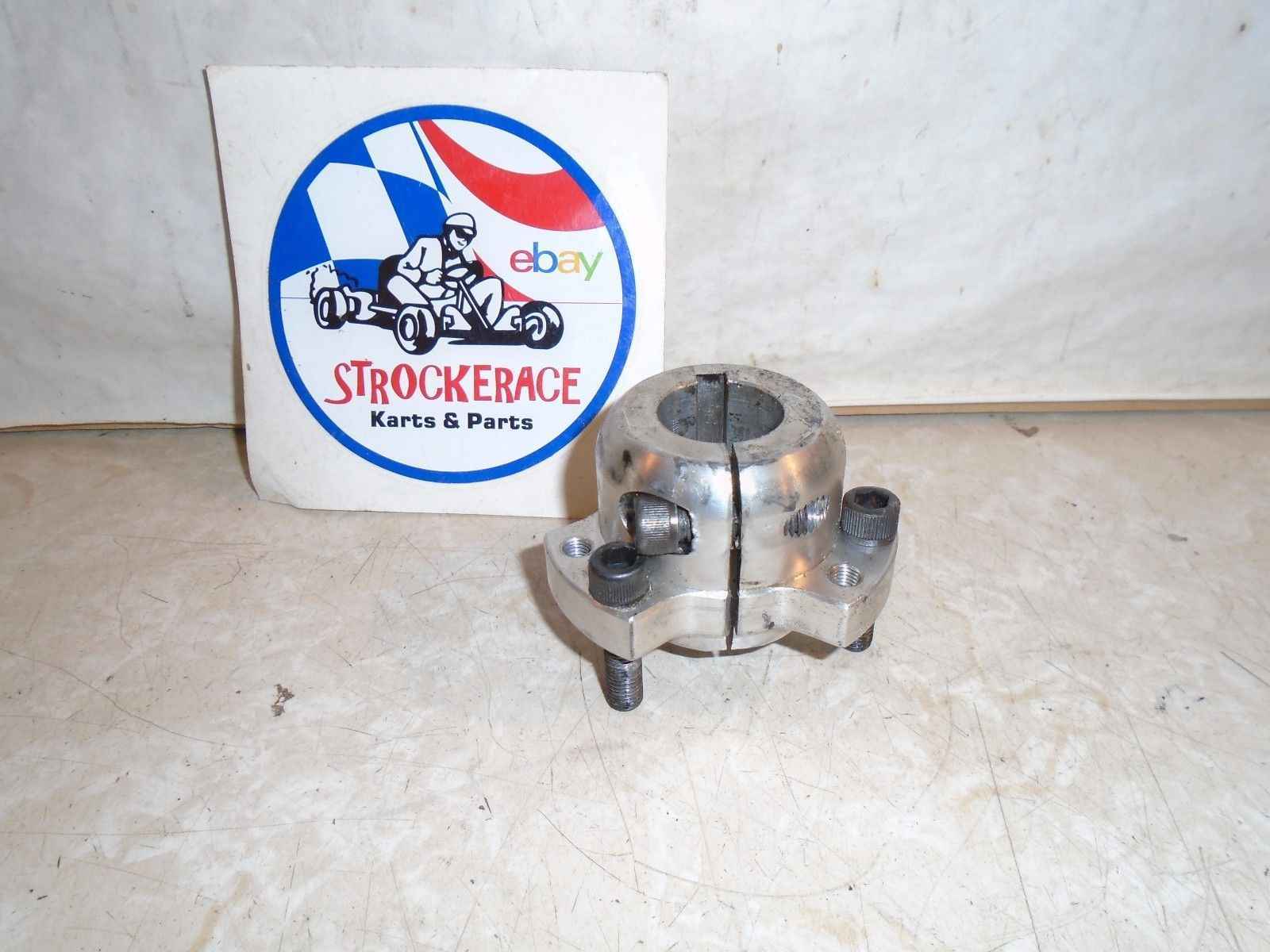 Deadline for this project is June 2017, so it can be used at the White Knuckle Scramble vintage event at Concept Haulers Motor Speedway.

Holy hell that thing looks like it’ll be a blast!!

It better be. I’m really concerned about traction on that big rear tire. There won’t be much weight on it.

Maybe I should plan on a way to add ballast?

Push starting should be OK, they push start twins in Oz and NZ. In fact there was I video I wanted to share on the facebook page showing just that. You just have to make sure you

The inverse reminds me of running slicks in the wet in a direct drive on a road course. Lock the wheels + compression keeps them locked

have to jump in the seat to re-gain traction hahaha.

Push starting should be OK, they push start twins in Oz and NZ. In fact there was I video I wanted to share on the facebook page showing just that. You just have to make sure you

That thing is a treat especial, I’ve built it to take care of business. It will NOT push start.

The Unlimited All Stars peeps use pusher karts for the same reason, and this motor was built in consultation with a UAS mentor… So yeah. BRAP indeed.

How about a bumper mount for a car? There are a lot of these builds that are done for Sprints and Midgets, like these: http://jimmyjeep.50megs.com/2014-19.jpg

I think with a little modification to existing designs, this could be done.

I love your original build though, it look sweet!

How about a bumper mount for a car? There are a lot of these builds that are done for Sprints and Midgets, like these: http://jimmyjeep.50megs.com/2014-19.jpg

That’s a solid idea, but due to my local track’s design and safety setup I don’t think I can drive in the pits, and no kart driving is allowed in the paddock.

But, I’ve just got a new tow hitch, so if this plan fails making a hitch mount bumper starter could work.

That’s a great counterpoint, so I am unsure how you could implement it without a push vehicle. Hmm…

This is more crazy than I thought… so you’re building a micro pusher kart of some sort. Do you have a sketch. I figure just gear the pusher as low as you can and it’ll be fine torque wise.

I’ll get a sketch out eventually today. Got busy last night and couldn’t upload it!

Here’s a 50% accurate representation of the completed booster: 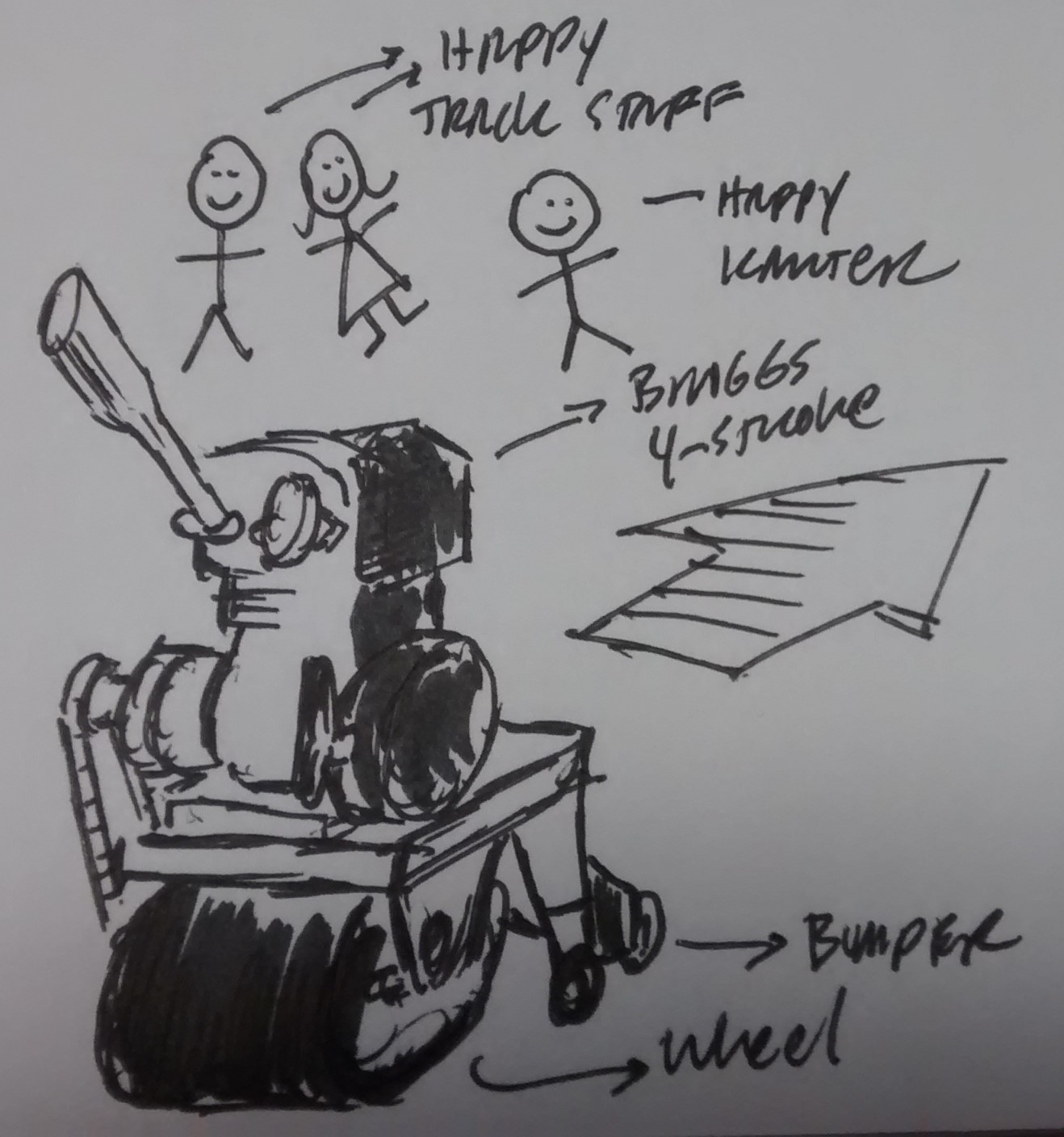 Many moons ago, I was about to head out onto the track to practice for the IKF grand nationals at Buttonwillow. Well, it just so happened that one of the faster drivers in the Formula Y class was also about to head out onto the track. He and his tuner dropped their kart on the ground, raised the rear up, and did the iconic direct drive shuffle to get it started. The tragic moment, however, came when the driver failed to hop in. The engine caught, and it was GONE. Shot out of the pits and across two sections of the track before slamming into a berm, taco-ing a brand new CRG kart. It was one of the most alarming yet hilarious moments (because no one got hurt) I’ve had at a kart track.

With this story in mind, how do you intend to stop this thing from rolling as you pull away? A little pull cord might work?

Well, the driver will be in the kart. So he can stop that by using his brakes or at least aiming for a tree.

The booster can be stopped by just releasing the throttle trigger. It will have fully functional brakes that will be activated once you let go of the throttle.

UPDATES: There was a design change! I’ve bought a combo engine mount/bearing mount which I was going to expand to make it fit around a single wheel, but then I’ve realized I could trade width of the assembly for height. So now the booster will have two dirt kart wheels, with the motor sitting directly between them.

Pictures of a mock up will come once UPS drops off everything. I’ll have to mock it all up before I order the axle, regardless.

I think the trade off in portability in order to go wider instead of single-wheeled and taller will be too much, I want something I can throw in the back of my truck without having to play a Tetris game to reorganize things.

So I am going back to the single wheel pusher idea.

Time to dust off the welder, the final batch of parts is arriving tomorrow! 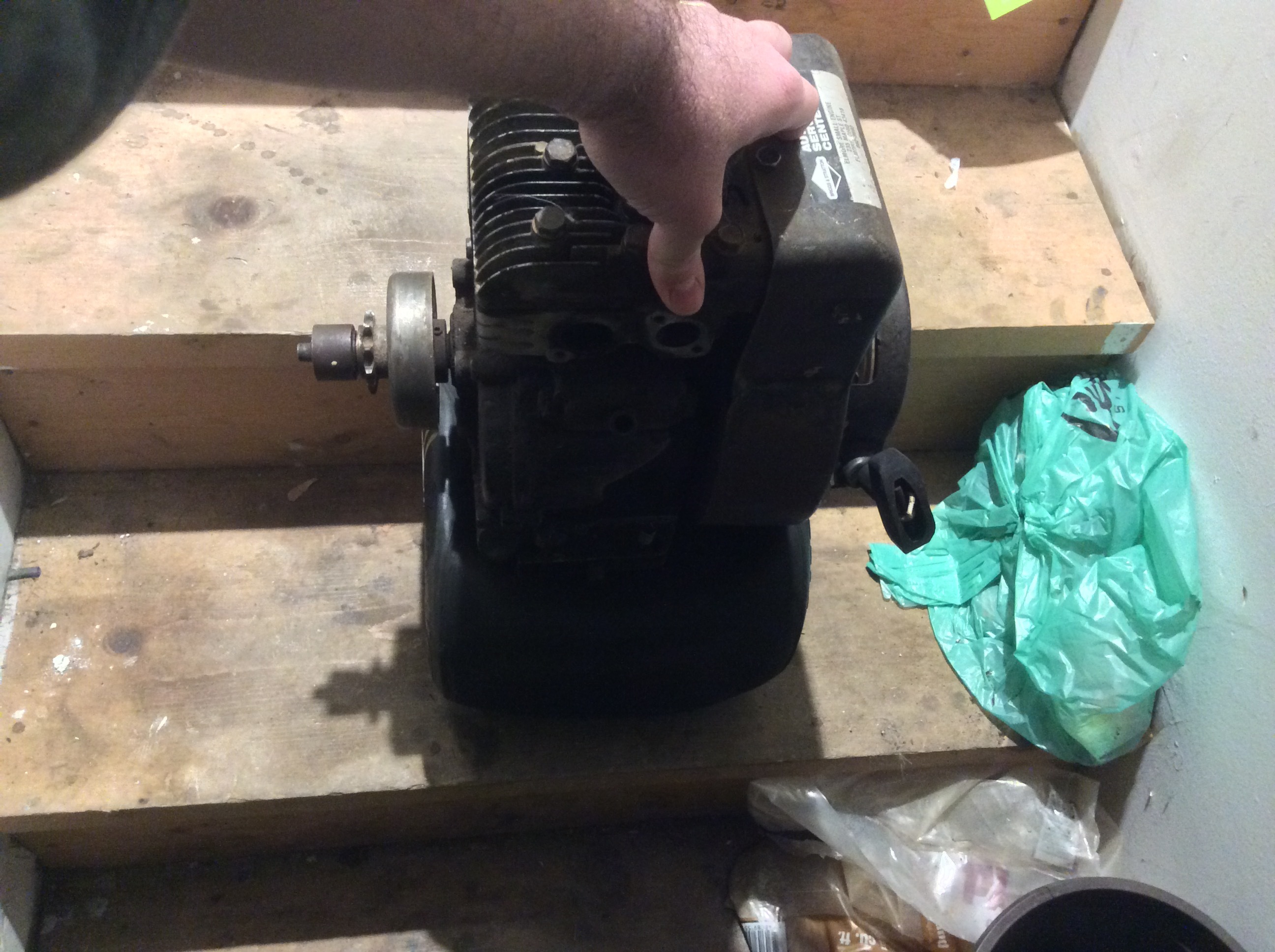 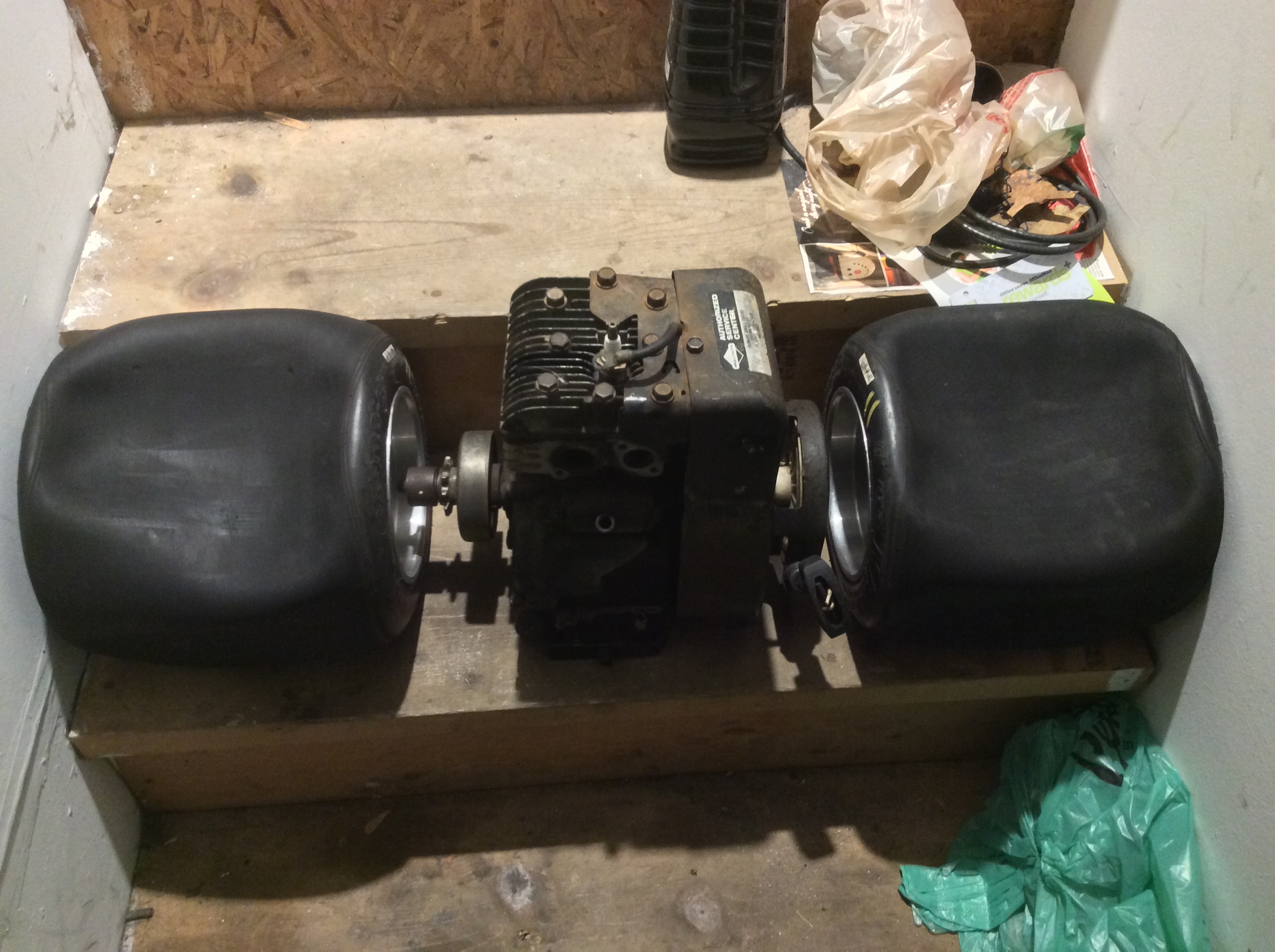 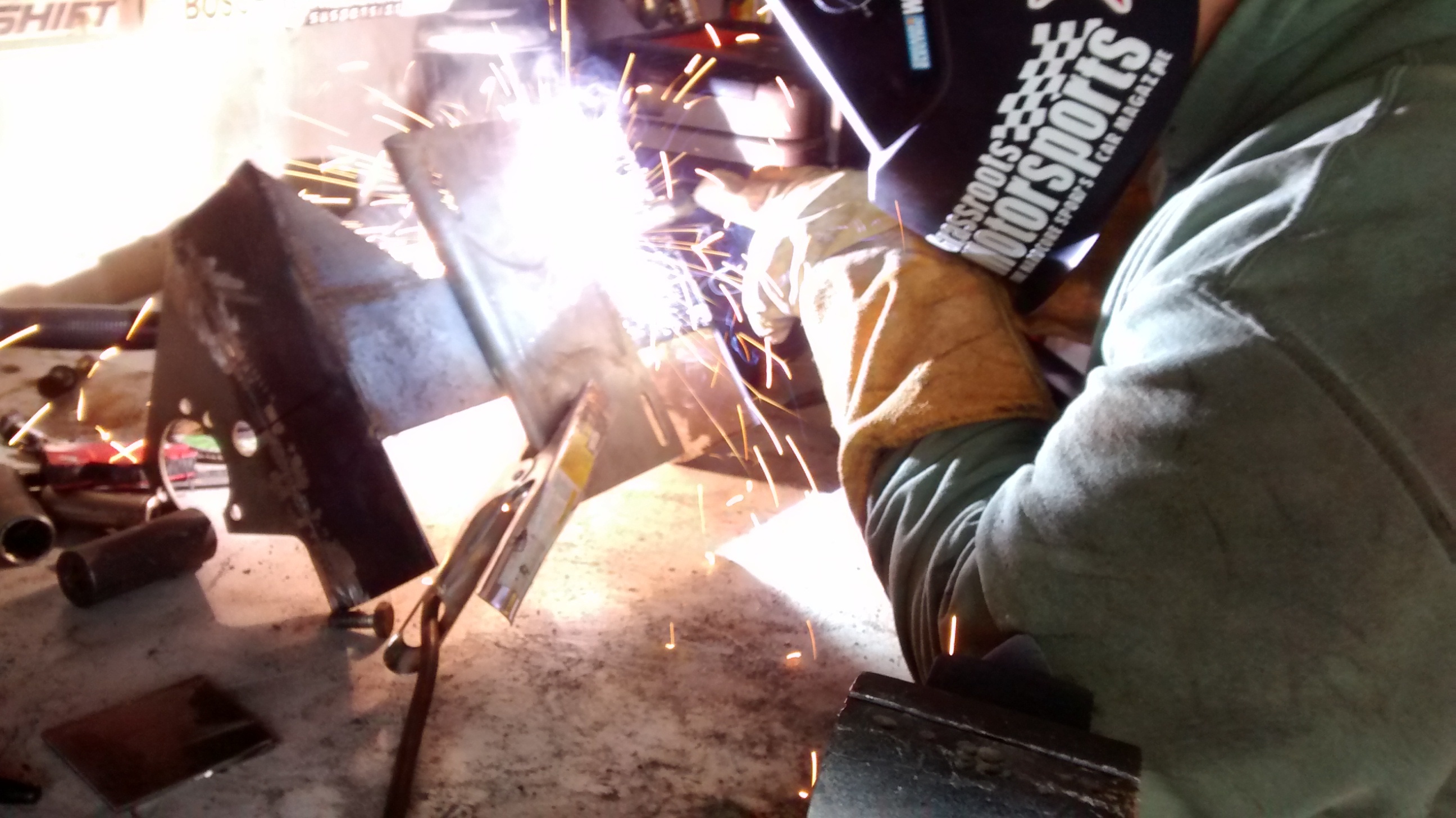 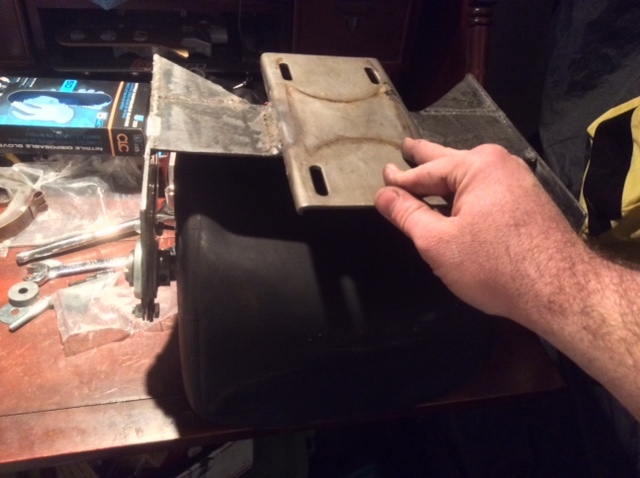 Aired up the tire and took the assembly for a roll around my garage yesterday. All clearances seem fine, this will work!
Updates: I am ditching the briggs flathead as the powerplant for this thing for a few reasons:

1- I don’t think I need 5-10 HP to get the vintage kart started. If a motorized bicycle can move around a 300 lb. adult, I don’t see why I would need more then a single HP or 50ccs if the booster is geared low enough.

2- With oil in the engine, it will make it a HEAVY system overall. Portability became a recent design concern, so by extension the weight of the motor became a negative point. Moving to 2 stroke power!

3- I feel sorry to use what is a running, great condition vintage flathead for something like this. I’ll rather make it into a cleanup and flip project to perhaps sell at a vintage swap meet. The new powerplant will be something common and disposable, made of Chinesium or alike.

Keeping up with the motorized bicycle theme, there is already something in the market that uses the same control system that I was thinking of: Gas powered skateboards! 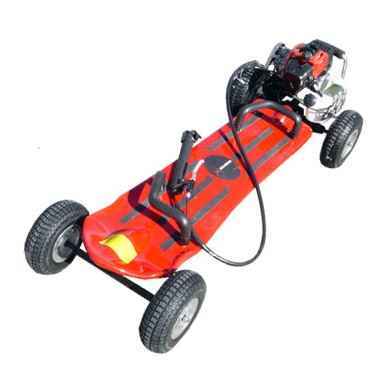 The plan now is to do is change my engine concept for something lighter and more portable (50cc 2-cycle), and to get my hands in one of those gas powered skateboard control systems.

You’re the first mad scientist I’ve actively followed as he works to bring his creation to life and this is great!