The battle continues… with : Build 0.1.0.2655 until they physics get changed again

And BAM, gone are all the records Gruntypellinor and TJ, due to the latest updates. Good luck getting them back, I am sure you are able to.

I’m looking forwards to it. I was bashing my head against the wall trying to hit 37.00 at GVKC. I was getting tired of it and am now free to go nuts again! 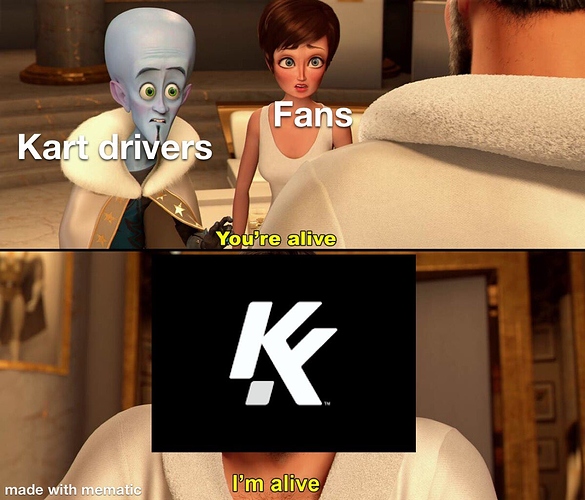 Build 0.1.0.2620 is now live. Please restart Steam if you do not see the update. New input system The input system has been completely re-designed and built from the ground up to make setting up wheels and controllers a seamless experience via a...

Feels good. Rear of kart much more predictable and stable.

Build 0.1.0.2620 is now live. Please restart Steam if you do not see the update. New input system The input system has been completely re-designed and built from the ground up to make setting up wheels and controllers a seamless experience via a…

After two restarts of it crashing yesterday I finally gave up. Wonder now that the big build has been released they will look at the requested online players queue.

Undoubtedly. The online multiplayer is/was down for everyone, existing beta testers included. They basically are redoing the entire back end and it’s their priority. I think we can expect a significant patch hopefully in a month or two.

It worked flawlessly for me, no crashing.

This will hopefully delete corrupted file and you can start. If not, we can get dev to look at crash log.

Should we kick off a new topic for v…what ever it is?

Second update in as many weeks…

Added: Wheel profiles now support digital inputs to analog actions, so it’s now possible to bind camera look, clutch, brake, throttle to buttons/paddles
Added: Sunny/cloudy weather option is now hooked up to time of day
Added: HUD vehicle radar and live placings can now be hidden and moved via mouse
Added: Triple screen support. (Please give us feedback or suggestions if you have trouble setting this up)

Fixed certain wheel and pedal setups failing to be detected. Increased number of direct input devices from 8 to 64
Fixed crash when changing opponent volume slider while racing
Fixed crash caused by using Oculus Touch controllers in main menu
Fixed bad VR camera post race results sequence
Fixed bug where ghost vehicle would continue driving after being defeated in timetrial
Fixed occasional motion blur glitches in some cameras
Fixed bug which caused only a maximum of ten AI opponents to be available. Up to 15 opponents should now be possible. (this is not quite fixed…)
Fixed bad motion blur on rotating parts

I too have been busy. I grew tired of chasing my best at GVKC and hopped in the x30, for the first time in months. It feels terrific after this update. The brakes behave more like real brakes and the back end kicks nicely. A joy to drive and you can wrestle it like a bear.

Anyways, here’s some fun PFI-C. I’ve got some work left to do, but it’s a good start. I know I can shave off half a second. From there, pretty sure can go low 41.

I just started playing (I wanted to say driving actually) KartKraft two weeks ago and I am hooked.

I wished they had ‘fixed crashing when touching the inside kerb’

Aha, I thought I recognized that name on the leaderboard… Didnt get tot try last night with update, but I thought the kerbs mainly OK after this patch. A few builds back the kerbs were explosive, here I’ve only had one or two flips and they were mainly my fault.

Yeah I watched your footage from a few posts above and I must say I can learn from your dedication to attack the kerbs. I am too afraid to spin into the fence like a helicopter.
Still, you say that you had a few flips that were your fault, but how many flips did you have in real life? Any flip in KartKraft is one too many in my opinion.

Anyway, never said it was perfect. The way the game simulates a real kart is very impressive. I tried Kart Racing Pro but the kart feels way too lazy on turn in.

I agree. They aren’t there yet. I wonder though if I could load a real kart up like the sim karts. I’ve never actually bicycled more than an inch or so IRL.

Really looking forward to the ‘slower’ karts, the KA100 and the LO206. Driving a KZ2 in KartKraft is really impressive, but most of us will never drive one in real life, so don’t know how accurate it is. I would love to try a kart in KartKraft that is quite as slow as the karts I drive in real life. I think I can drive that one closer to the limit.

Does anyone know if kartkraft has like lo206 or if they’ll be adding it? And is driving x30 on kartkraft good practice for racing lo206 in real life?

In so far as practice… I am biased. I find it extremely helpful. I don’t race KZ irl, never have. But, learning how to make it fly has indeed changed how I drive. X30 is much tamer and I find analogous enough to real life to be worthwhile. It’s not the same, but it operates under the same approach and technique.

I am pretty sure that my relentless KK lapping has improved my driving pretty significantly. It is seat time, of a similar sort. I have gotten faster and faster, irl and in game.

The x30 has waaaay more grunt than the lo but it’s still a momentum based kart. I think it’s similar enough to be worthwhile practice. If nothing else, it is a very good sim and it will likely blow your mind a bit. In VR, I forget that it’s not real. You get lost in it.