Well that’s a much better explanation and solution. Thank you!

Faster but not satisfied 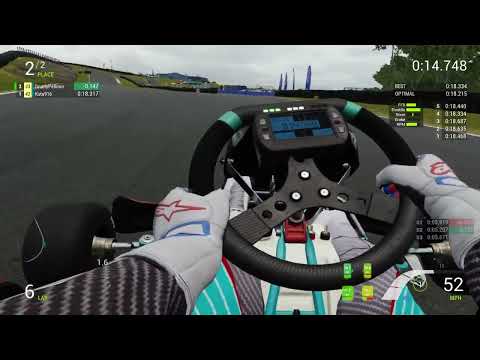 Not a pretty lap and I think I lost a rev or two coming round the sweeper, exiting chicane and rolling the kerb. You can hear the engine make a “hey something is hindering my breathing” noise as the weight of the kart settles back down and the tires bite fully. Subtle, but it’s probably a few hundredths. The lap doesn’t look that pretty but it was quick, and it’s sub .2, so I’ll take it. Top 5, tho, so that’s meaningful. Getting there.

I along with my other teammates did the iRacing IMSA 160 min endurance at Daytona last night in prep for the 24 next weekend. My co-driver started 10th in GTD and handed the car to me in 6th. I took it up to 3rd but was about 1/3 of a lap behind 2nd, and got lapped by 1st on the last lap. At one point the impatient GTPs made a massive road block trying to get around the slower cars and one backed into me as I was trying to slowly get around them. After spinning in the grass, another one drove straight into me. Last couple laps were lessons in fuel savings (the Audi does not have changeable fuel maps) and the car actually sputtered out of fuel AT the finish line. Overall a great race for us though. 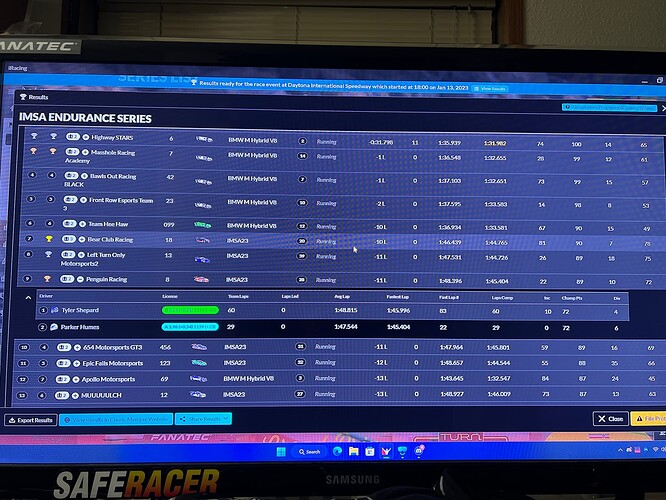 Did you guys participate in the fiasco? The big endurance race that crashed and had Max in it?

That was an invite only race for less than 200 drivers which even charged 2000€ + for entry. That’s part of the reason he was so pissed. They were giving laps back for the disconnects if a min number of people got kicked at the same time. The disconnect group Max was in didn’t hit that number.

So apparently they screwed up and left some info visible that allowed them to basically get doxxed. I can’t but help wonder if MG hadn’t been involved how this would have fared.

I checked out an app last night called OpenKneeboard, it’s for flight sims, but allows for windows to be overlayed as well. AND it works with OpenXR which isn’t working with overlays yet.

I set it up with a webcam to give me a view of my button box. No more fumbling around hitting every wrong knob/button. It’s even set up to fade out until I’m looking in its general direction. 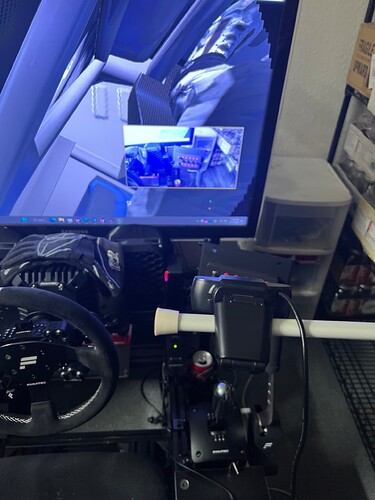 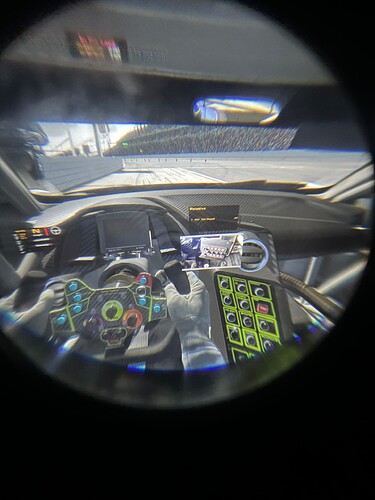 That’s really cool! I downloaded all that stuff but I’m not sure it plays well with KK. I have been been using the open Xr option for iracing though.

So the install was easy once I figured out how to get the retaining ring/clip off. I used a thin eyeglass screwdriver to get under it and flex it so that I could then manipulate it off.

One thing that should be mentioned is that the bearings that sit inside the collar also fall out when you remove the QR. so be ready for that and remove it in a place where the bearings can’t skitter off under the couch or whatever.

The best lit place I have in my house is my bathroom. I almost lost one down the sink, but my QRs had enough grease on them that they mostly stayed in.

The future of rental karting or the equivalent of 3D movies? 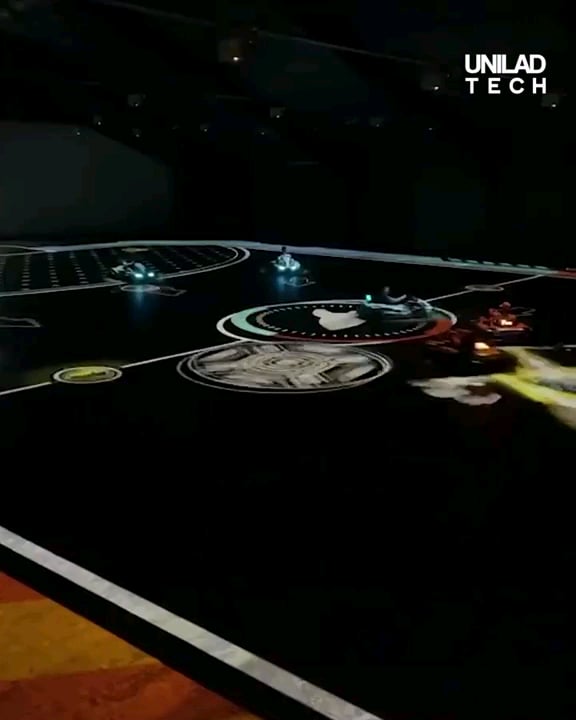 Karting games, the karts auto slow as they get near each other. I’m guessing that it’s fun, but not at all about going fast. Could be popular. Games include Rocket-league type football/soccer w/ karts. 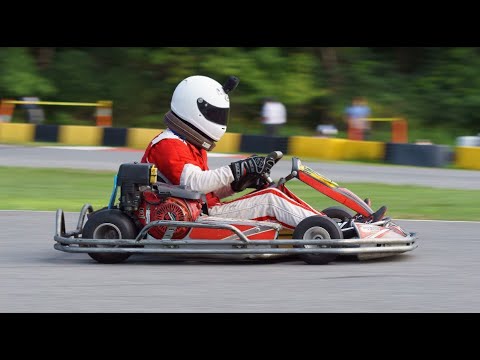 @speedcraft (or anyone else):

Ok so…
I am really struggling with this turn.

You can send it into the turn fast which makes s1 blazing but makes s2 s2 slow.

The idea here seems to be getting to power as early as possible.

Fast entry makes that hard, in that the kart wants to go wide and gets under the kerbing, and then you have to hop kerb to straight line.

Careful slow entry is slow. But you can get to throttle and build all the way out of turn. However, when I brake earlier it seems like my minimum speed is slow. Fast entry has you turning in later. Slow seems to want you to come down to apex earlier, narrower.

I’m just struggling to get timing right here. I really need to understand why the .1s are fast and the rest aren’t. I just can’t see it.

I am pretty sure the answer lies in not rushing throttle, braking earlier, but I just can’t feel it.

Any thoughts as to what I can try to tighten up my range and understand this? I need to land .1s more consistently and unless I actually grok what I’m doing here, it’s all just chasing feel.

Yeah but to carry bigger speed into it requires something that I can’t put my finger on. Normally, faster approach and turn in ends up making me struggle to keep kart tight to inside. I can’t figure out where/how to decelerate. I can roll it, I can stand in the brakes late, etc.

Fast seems to carry you deeper on the approach resulting in longer travel but in a straighter line.

I see what you mean about minimum speed. The fast ones are 29-30 mph low. It seems that getting the kart pointed correctly so that power can come down, straight, is what matters most. The timing of the back end and the throttle input come together well in the fast ones and there’s some sort of delayed or inefficient throttle in slower ones. Too much throttle also makes you go wide mid turn which is what makes this so challenging to me.

Twitch is the world's leading video platform and community for gamers.

His turn into 2 is different I think. Maybe earlier and rounder.

@Bimodal_Rocket, I see two things that you could work on:

Maybe try to think about just ‘suggesting’ the direction change… send the request with the steering, and then let the chassis and tires do their work. Also remember it takes some fraction of time between when a steering input is entered, and the resulting traction and forces actually act on the kart. Also remember that process of generating forces builds momentum over time, so often you must end the ‘request’ before you actually want the effect to end. I.E. start removing steering input fractionally before your want the kart to stop rotating.

In the Twitch video, I see a very good example of appropriate steering input for the high-speed turn. He smoothly ‘suggests’ the direction change, and then gets the steering input out at the appropriate time so the kart rotates into an optimal trajectory and stays there; (he rides about a 9-10 degree slip angle on the RR tire from about 1/4 to 1/3 of the way through the entry phase, all the way to the exit).

The other big difference (which is actually not that ‘big’ but is important) is the run from the high-speed turn to the turning in point for the hairpin. Because of the trajectory he is on coming out of fast turn, he continues his ‘exit’ by arcing out onto the curb, and he uses more curb than you do (maybe 1/4 kart width), which gives him an even greater arc into the hairpin turn. Also, I think he turns in at about the same place as you (close to the ‘A’), but there is still rotational momentum in his kart from the way he finished the last turn, so that energy (along with the larger arc) means his kart rotates well into the turn, and it can carry a lot of speed doing so.

You tend to exit the high speed turn, and then kind of drive a straight line to the outside (onto the blue/white curb), and then turn in. This makes you kart work harder than it needs to because your pointing the nose away from the corner on the way to your turn-in point. This gives kind of a ‘hooked’ beginning to your line/trajectory through the turn. Trying to overcome this maybe a subconscious contributing factor to the turn-in technique issue for this turn.

Anyway, watch the Twitch video and your vids again, and see if you can identify what I’m talking about. If so, then maybe try some imagery to program how you want to drive those two turns and then try and match that program.

but the steering input is left in too long,

Aha! This would be in-character for me. Thank you! I’ll bet this one thing is key and will yield new results. I shall try tonight.

Been a bit out of touch with how the sim world evolved lately, but dbox released quite a few interesting products : 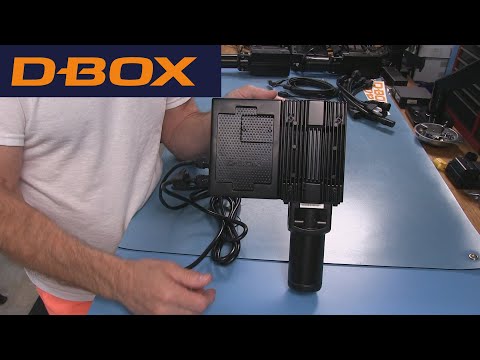 The new GEN5 actuators, with just 1 master control box instead of 2 and each actuators have their controllers. Looks cleaner and easier to install. 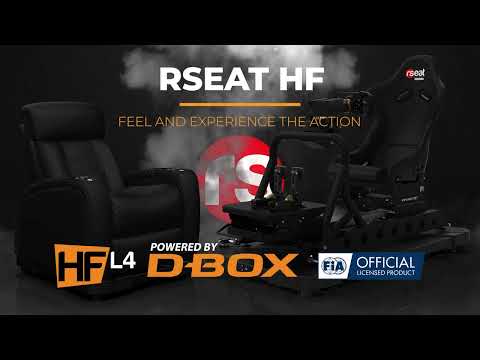 DBOX HFL4, the new all in one platform that adapts to any kind of sim chassis. Actuators are the GEN5 ones, but placed horizontally instead of vertically. I am skeptical of the feedback, but it looks cleaner and is actually plug 2 play.

Someday I’d love to try a motion rig, a good one.

Most of my alien friends didn’t like it, I was actually the only one with a decent level to really enjoy it to the point I felt I was faster with it