I think my fastest S1 is somewhere in that region. It could be chassis dependent as well

Ok so at one point I said. “you don’t even have to brake at PFI”. This got a collected “Lol wut” from various folks on the board. So for fun I ran a fast-ish lap with no brakes. 57.1.
That’s a second off my best time, basically, and call it 1.5 off world best. Kind of surprising and I didn’t really try too hard. Just 3 laps.

5 posts were split to a new topic: KZ Comes to KartKraft

And with tire change, everything is new again. At least braking. Leaderboards will change up. I am noticing a 10th in S1. I seem to be able to get in power earlier on bridge and can carry more speed into it. 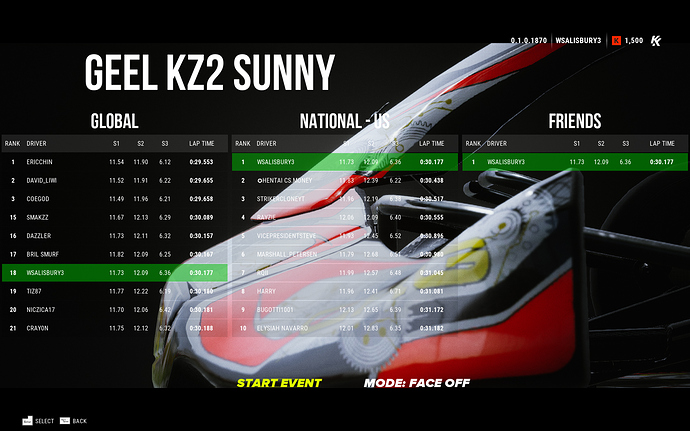 That’s what we’re talking about! 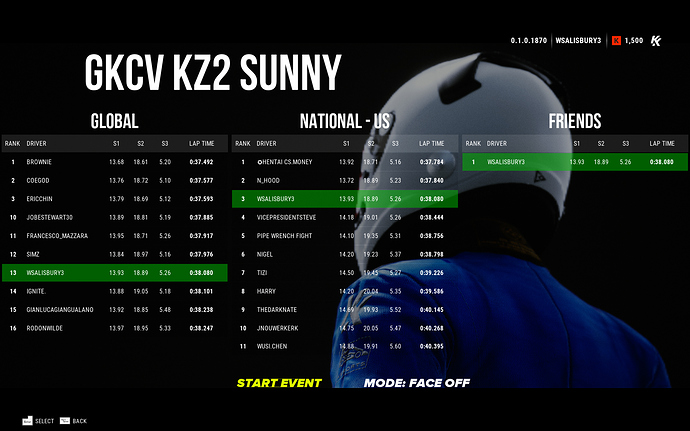 I have many things to say about this kart. All of them good.

The KZ is really interesting. It steers completely different. The front feels like a brick or a snowplow at low speed.

However, once you get moving, it becomes maneuverable. But, it’s turned by “thinking about it” and using throttle. For the most part, turning is basically a very gentle input as you time throttle with direction change.

It’s a bit like the steering wheel is more of a rudder than a wheel. But it’s a rudder mounted in the front of a powerboat. You tip the kart in and throttle to rotate through, kinda.

I felt like there is almost zero in common with x30 in terms of how you drive. But, I can’t quite place what it reminds me of. It’s not like the karts I know, but it’s also unlike a car, not that I have much experience with that either.

I think I get it now why I’ve always felt like shifters were held in a special category. They are special. They are totally different and I can see how the ladder to formula racing makes sense. That being said, most formula cars seem like they would be a step down!

Edit: now that I think about it, the KZ kart shares some things in common with the formula e cars I have “virtually” driven. Same torque steer and power out of corners. It’s just that the e-car is much heavier and slower. But there are commonalities.

It’s nothing like the Lucas Oil formula cars I tried. Those are comparatively more like a rental 4-stroke. I’m guessing you have to get into an impossibly expensive formula class to have something comparable.

I am guessing that restraint is the order of the day at GKVC in a KZ? That’s a short and tight layout.

Before I try the KZ, I want to mod my shift knob to make it sequential for the full experience.

I haven’t tried shifting for real yet. I have no clue when to shift so I’m trying to get a feel for it auto first.
That and my rim actually hurts to shift.

Actually how about PDK instead? Double clutch would be insane.

I don’t know about KZ in Kartkraft but KZ in real life, I’ve always thought of the lines you take as more akin to a motorcycle then any car racing. Formula Cars are more like a single drive kart, always trying to maintain momentum, U shaped speed traces, while a motorcycle you tend to brake and aim for the apex, stop, turn and then accelerate out, V shaped speed traces. It maximises braking in a straightline and uses the gearbox to its full capability. With formula cars I always found you were waiting to put on the throttle (or tickling it) because you couldn’t just floor it (it would understeer). That might be different in high powered formula cars but certainly the ones I drove understeered upon power application.

That sounds accurate. I have never driven a motorbike. I have been trying to carry momentum and try to be reasonably round but there is a great deal of trying to get wheels straight to get to full.

So like a very gentle tip of the wheel to get weight going and then blammo as the line opens up before you. 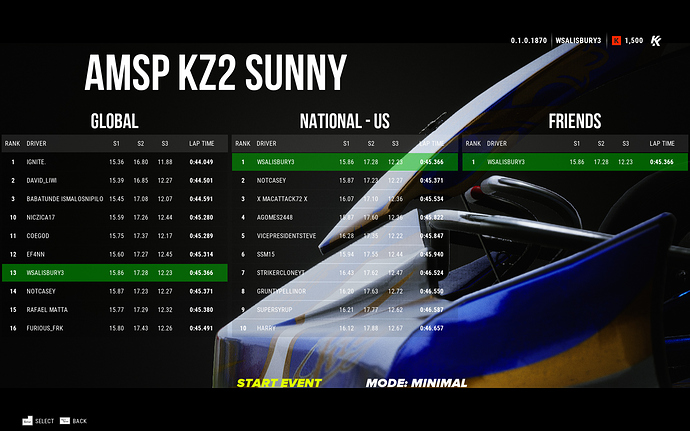 Still don’t feel 100% comfortable in the kart yet. It’s weird because I know what I want it to do, but can’t seem to find the way to get it to do what I want. Nevertheless, got to the top of the board. Also found that I was .3 tenths quicker when I turned the Face-Off mode off and just drove laps with no distractions.

Yes but I hate that you don’t get the cool confetti when you beat the laptimes in minimal. Nice laptime! Wonder where it ends up.