i have the other drivers pov here

That’s not dirty driving. You all went three wide into that corner which wasn’t a big deal. Minor contact. What happened next was miscommunication. It looks like the other fella was trying to let you by but instead of picking a side, he was reacting to you. Sort like when you are walking down the street and both you and the person you are approaching tries to move over.

I think this is just a mistake. If he wasn’t pointing you by, not sure what was going on. For the mist part, you gotta make your own calls and quickly. If someone waves you by, great, but be deliberate.

I’m seen these hand gestures a few times before. What do they mean?

Ok so confusion reigned. Next time, just let him do his thing. Eyes forwards, win. Don’t let yourself get taken off task.

The other driver was attempting to go for a gap that was never there. Luckily the outcome was only minor contact. All of the hand gestures and everything from there forward seem like nonsense, and I’d try not to let that distract you in future scenarios. I’m with Dom: instead focus on making your move, and be prepared to react to some sporadic movements from this particular driver.

Live and learn. This won’t be the last time you get bumped/banged on.

Yeah. Make decisions and live with it. Sometimes you won’t have enough info or you will make the wrong call. (Like the time I dumped that new guy by not expecting him to act new).

If you defended your line rather than throwing hand gestures then you wouldn’t have lost your position. The real issue though is you didn’t defend sufficiently at the downhill hairpin. Everything else from there is almost irrelevant coz you allowed yourself to be swamped from that point on.

Oliver,
I think it’s pretty well established that this wasn’t dirty driving. I would edit the title of this thread to reflect how you feel now, rather than your frustration at the incident. It is understandable that you thought there was foul play. However, it is not fair to the other fellow.

This is more of a discussion moment. After the race, you could discuss with him, “Hey I got real confused out there, I saw you point me by…”

To be clear, the move the competitor made at the 00:53 mark in the second video isn’t something I would consider acceptable. The kid had four wheels in the dirt in attempt to make a pass that just wasn’t there. I get that Alan points out the lack of defense leading up to the incident, but it’s still not an excuse for the other driver barreling into the side of him.

Yeah. Not getting that vibe though. I didn’t see an attempted punt. I see a kid waving arms around confusing himself and the other guys. Yeah, not good, but not awful.

Yeah I don’t see why you got the penalty, you didn’t push him out wide, he was still kind of behind you when entering the turn in the 0:53 mark, he just put himself somewhere he shouldn’t. That’s last lap racing though, not surprised that it happened.

Also, the way he was pointing you by, and then shutting the door on you, that seemed pretty bad, understandable why that would get annoying 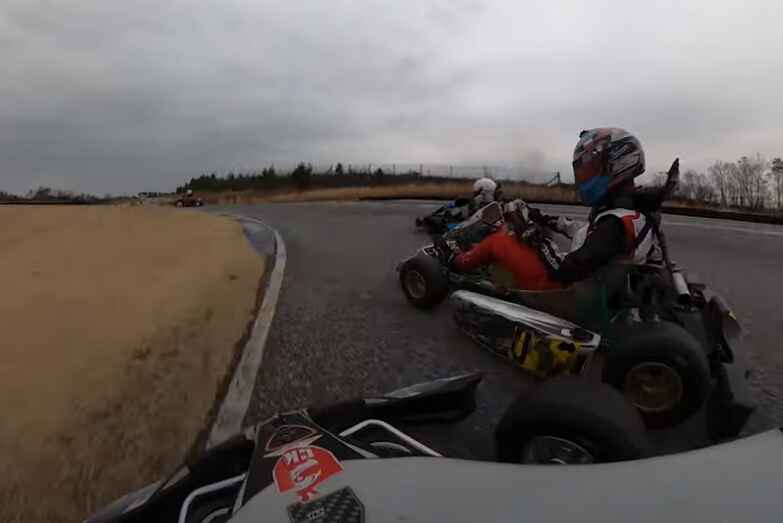 The position still clearly belonged to Oliver at this point, and note the trajectory of the competitor. The wide angle lens makes it look for favorable for the competitor (onboard) than what it actually is.

Intentional or not, it doesn’t change the outcome of the incident. “I didn’t mean to” isn’t an excuse for driving into someone.

Incorrect call to assess a penalty to Oliver in this case, but sometimes that’s the way it goes.

Yah ok. But do we need to call out our pals publicly when they mess up? Just making the point to Oliver that you don’t want to go down that road casually.

Agreed, I think there’s definitely a more tactful way to share the video rather than just openly blasting the other kid.

@olivier.p- Ultimately these are racing incidents, and things like this happen all the time. I’m sure you may find yourself on the other end at some point, where you’re the one who affects someone else’s race by mistake. To Dom’s point, it’s ok to share your frustration from this incident, but perhaps next time you could provide a little more background up front, so as not to only be pointing a finger at the competitor. I would also make sure that you have a respectful conversation with the competitor in the moment, as I’d imagine it’s not the last time you’ll be racing each other, and it may be helpful to understand each other’s perspective.

Emotion gets strong when racing. But having watched both videos, your emotion let you lose focus on the race at hand. Had you just put your head down you probably could have taken that place back. But instead throwing arms around and building frustration. In my opinion you took yourself out of that race.