Moral questions about an incident

So a guy in front of me locks up, and another guy goes wide avoiding him. I go for the double pass, and get turned into. Should I go for that pass?

I didn’t see anything wrong with the move you made. A bit ballsy, sure, but you were decisive and left room. The guy behind you (on the left) should’ve checked up going into that next left. And the general rule is if someone is on your inside going into the corner, they have the corner.

Yeah, I had the choice of slowing down and getting a good exit, or going for it there. From my viewpoint I agree with you

Interesting situation. Tough to tell where the contact came from. Did the guy on your left or right make contact with you? It would appear the 75 (kart of right) was still ahead of you so if he turned in, did he see you? Was it your turn? My opinion would be it was not your turn. Also is this a heat or feature? Now if the guy on the left is where the contact came from I would say he is in the wrong. Racing is always split-second decisions, sometimes we don’t always make the right decisions.

So 75 came from the right side and hit me. I was alongside him by the time he turned in. You can see him look back but I don’t know why he turned in because the corner was still a ways away. He launched me up and the guy that went off the track hit him. This was the Pre-Final

Nothing wrong there - you were far enough abeam the other guy for him to know you’re there, for me he should’ve given racing room.

A move is often a gamble, I did similar during team practice Saturday, unfortunately I wasn’t filming. I was behind two guys fighting each other on lap 2, I saw they were going two wide into the chicane whilst I was about two kart lengths behind. My thought process they’re gonna have to slow in the chicane, I’m full speed planning to slingshot up the inside of both on exit and keep the inside line into the next turn.

In reality they slowed wayyyyyy more than I anticipated, had to stand on the brakes so as not to pile into them both. I pirouetted through the chicane instead, which in itself was impressive

It is a real shame you didn’t film that😂

Fair attempt, wouldn’t give it a second thought.

Looks like a real narrow track to me, I’d assume most passes look like that one. I think the guy that was clearly outside should have given room.

The tell tale to me is where the kart in front of you turned in. That driver turned in a little after the end of barrier on the right. You were well beside the kart to your right well before the end of the barrier. I do not think you can be expected to know he was going to turn down on you. If he is consistent at doing that you may have to stick out your elbows.

When I started someone I raced with always came over on me. I asked him if he would do that on another guy we raced with. He told me other guy would not let him. I let him know some day soon we would crash. Some day soon we did. From then on he gave me space to race

Thats a really good point. Ive had several altercations with this particular driver, 1 of which ended in a crash before. Hopefully he knows by now that im not going to make room for him if he tries to push me. Hope things change

Does bring up a good point. We got a new guy who is promising but he pushes folks off the apex when he gets all excited, trying to get under you everywhere. My response is do defend like hell and push back if he leans on me, literally. I assume at some point we will lock cages and spin off into the sunset, never to be seen again. Problem solved.

or I could just get faster than the midfield and never have to bother! I think thats the best idea

Starting in front of the guy does make the pass a whole lot easier.

Does bring up a good point. We got a new guy who is promising but he pushes folks off the apex when he gets all excited, trying to get under you everywhere. My response is do defend like hell and push back if he leans on me, literally. I assume at some point we will lock cages and spin off into the sunset, never to be seen again. Problem solved.

Don’t forget the new guy may not know any better. NASCAR with spotters, just being a foot or so up the inside is mostly viewed as along side. With karting, no mirrors and no spotters the overtaking driver needs to be up a lot further. Also they need to be inside before turn in, not before apex. You might try talking to him first

Karting Australia has a pretty good rule of thumb for overtakes set out in its rules:

"In general, the onus is on the overtaking Kart to execute the pass safely.

I reckon you qualified for a Passing Overlap. So yes, you should have gone for that pass. You earned it in the previous corner. 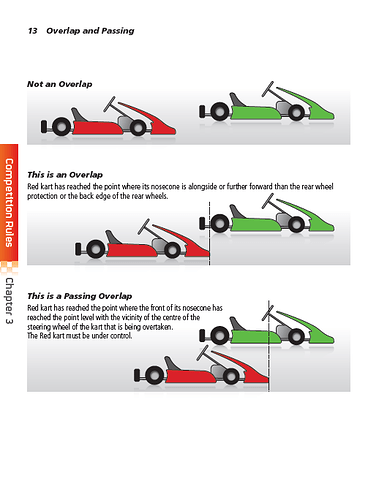