Have you seen any surprises in the new karts for next year?

I want to see a drum brake. It can be made smaller/lower inertia for the same amount of stopping torque as a disc, and it can be mechanically actuated and save all of the cost of a hydraulic system. The shoes and pivots can be mounted directly to the bearing housing so there’s no need for a backing plate, and air could be provided to the middle of it with a scoop.

I don’t think I have ever seen one in production, but when iKart was first developing their chassis (2011-2012 time frame), it had a drum brake. I don’t remember the details, but I don’t think they could get it working properly so they went back to standard.

I think the feel could probably be addressed if both shoes pivot on leading edge. I am not sure it is worth the invention effort. Years ago I race at track with really long straight to tight turn. In TAG we would expand brake fluid in a session if not doing something to cool it. I switched to Birels cantilever brake with slave cylinder that does not touch the pads. It solved the problem. I always like those.

Your mention of a drum brake and small/low inertia reminded me of a braking system I came across many years ago, only ever saw it online and it’s certainly interesting. Obviously never gained much traction in the market. Took me days of searching to find it again. 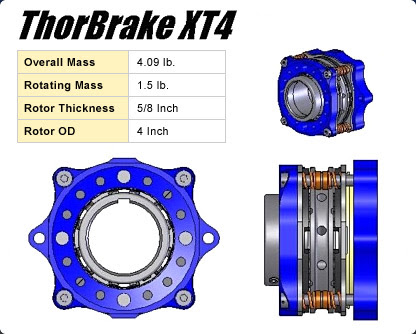 I worked with the designer to test prototype versions of this at NCMP back in (I believe) 2009. It was certainly different, and took a bit of tweaking to find the right pedal feel and braking force. Part of the concept was that the full circumference pad/rotor would be less disruptive to the chassis dynamics vs. traditional systems with single point of contact brake pads. Robert, the designer, was very knowledgeable and it was fun working with him.

I had thought about how it would apply torque differently to the chassis, certainly interesting.

I remember seeing this in 2009 ish at the kart expo in Illinois. Didn’t realize it was Robert Mott’s design though

Wasn’t Robby Mott’s design, it was another gentleman named Robert, but I can’t recall his last name. Mike Burrell would know, as he is how I got involved in the project. He published an article in NKN about the Thor Brake.

I do recall there being some drama with a competitor who had a similar design that seemed to get slightly more commercial traction. Again, the name slips my mind, but it was a recognizable name in the industry to those around at that time.

EDIT: was able to find the name of the designer- Robert Sollenskog

Ah, thanks for correcting me.