Rapid One and the Mid-Ohio Redemption 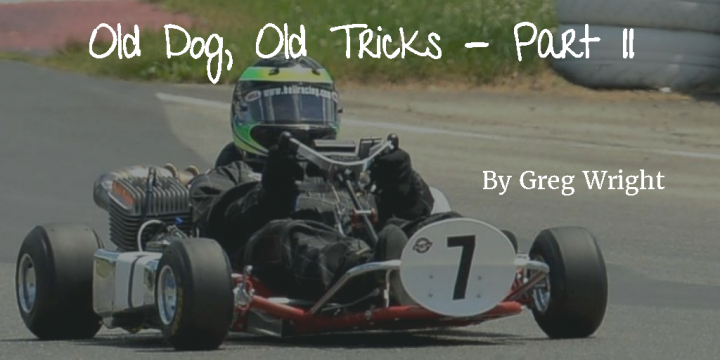 *** Editor’s Note: Don’t miss the video of Greg’s return at the bottom of this article ***

As the race date at Mid-Ohio loomed large in front of us final preparation went smoothly. I had made a visit to the shop of car owner Dean Axe who gained a few nicknames over the race weekend including “El Patron” and the "Godfather. While there we did a final seat fitting, did the stand break in on the engine and static checked the clutch.

Dean’s “Man Cave” was an interesting place to visit no matter what. A large herd of vintage karts rested peacefully in their respective places, but beyond that there were motorcycles, a mammoth restored John Deere tractor that gave me a nose bleed sitting in the seat and a cool recording studio full of guitars, keyboards, microphones and recording equipment. There was an early Les Paul “Goldtop” and an early Fender Stratocaster among a half dozen other collectible guitars. Neat stuff to me as along with racing I’m also an avid guitar player (Blues and rock).

The days ticked off much quicker than I could have imagined, reservations were made, entry fees sent in, final phone calls and parts shipments were taken care of and it was time for the eagle to leave the nest.

On Friday morning June 17 it was up before the dawn and quickly joined by my partner in crime the mysterious Gooseman (?) we pulled out just before 4:00 AM for the four plus hour trek to my ancestral home at Mid-Ohio.

On the trip I pondered how we got to where we are with this project and hoped beyond hope that it wouldn’t be a repeat of the “Nightmare at Putnam Park” from five years ago that I described in the first installment of these articles.

he simple answer is “Yup” and for good reason, I hadn’t raced at all for the previous eight years, driven some yes but raced no. In addition I hadn’t been to Mid-Ohio in thirteen years and hadn’t raced a laydown in over fifteen years. So nervous? Yeah, just a bit.

Arriving at Mid-Ohio about a half hour after the gates had opened we found our way to the Godfathers garage conveniently located near the rest rooms (good for us uhhhhh more mature guys). Soon we were joined by Dean, his cousin Don Axe and my long time friend John Copeland from Fox Valley Kart who also was piloting a vintage enduro. The fact that we had a 68 year old (me), 66 year old John, 61 year old Don and the Godfather himself at 60 years of age. Quickly our garage acquired a nickname as the “Assisted Living Garage”!!!

After making our way through tech inspection and registration the first practice session rolled around in a hurry. Leaving the pits for the first time I thought to myself “Self!! You need to just take it easy until you get comfortable.” and that’s when it became interesting. Returning to Mid-Ohio for the first time in many years in less than two laps it became (Politically incorrect statement coming) like an old girlfriend, I knew where everything was and what it liked.

Cutting the first session short to adjust a clutch that was on the high side and making a tire pressure adjustment to alleviate a hop in the section called “Madness” and out we went again in session two. To my amazement things began to click and the times fell lap after lap. Towards the end of the day we made a couple of flex length changes that incredibly did nothing but make the car better each time. Friday practice ended and a fabulous beer fueled conversation ensued that went well into the evening. Nothing like a few dirty tricks and tall stories to finish off a great day.

Saturday morning rolled around way too fast and the inimitable Gooseman (?) and I headed back to the track where Dean already had everything ready to go. One short practice session and I declared the machine ready to race and we went into race prep mode.

Come race time I was once again a “Nervous Nellie” as we gridded the kart. What happened next still astonishes this old veteran. The green flag dropped and it was “Hasta lavista Baby!!” and I literally ran away with the race winning by a full lap and change. It was certainly entertaining at times because as is normal in roadracing these days we were in a race group with a handful of other classes and the officials deemed that the Vintage class would start as the last class. Overall I started 62nd and by the end of the race was 23rd overall and the class winner.

The last few laps I started hearing a noise and feeling a vibration in my right arm and worried that we were going to have a mechanical DNF but it hung on to the end. Once arriving at impound we discovered that the belt/clutch guard had spontaneously disassembled itself and required some thoughtful repair. My hat goes off to both Dean and Gooseman as they tackled the job totally while I profiled and drank water in a lawn chair. It’s good to be the king!!!

Once again that evening the lies got taller and the jokes on one another came rapid fire one after another ending up at a Mexican restaurant with some great quisine and plenty of liquid lubrication. John Copeland and Dan Stowell joined us for dinner and the stories went well into the night.

Sunday was a little more exciting than the day before, the one minute flag went up and we counted down the time, on my signal Dean hit the starter and the engine fires immediately and died!!! Dean was already putting the starter away when I discovered that I could swear in mutliple languages at the same time and we got the engine restarted just as the flag fell getting a poor start and falling to third by the first turn, by turn three I was second and exiting the “Keyhole” I took the lead.

Then to my surprise competitor Joel Walworth had upped his game big time and hung with me for about three laps. It was interesting, Joel was driving a later model Emmick laydown with a more modern long low and narrow layout compared to the bulkier '76 Margay that I was piloting. He could draft me much better than I could draft him and we traded the lead a half dozen time before he ran into some sort of a problem. From that point on it was once again “Hasta Lavista Baby” and I stormed off on my own eventually finishing an astonishing two laps ahead of 2nd place.

I didn’t care if there were any rewards of any kind but we hauled off two custom labeled bottles of wine and a couple of huge plaques one of which I gave to “El Patron” Dean Axe, a gesture that seemed to genuinely move him. 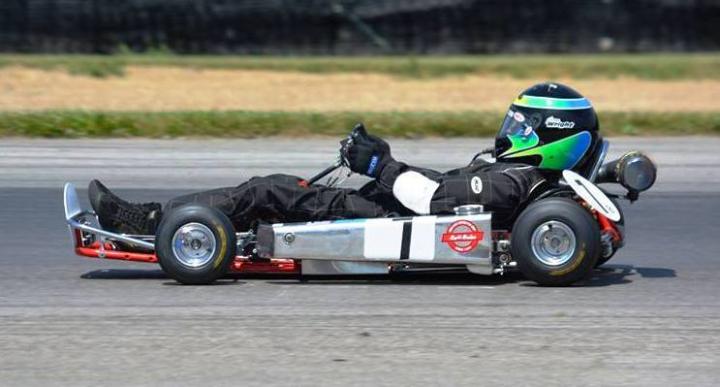 The entire weekend was literally like a fairy tale, you could never sell this scenario to Hollywood as too unbelievable. The bad taste in my mouth from the “Nightmare at Putnam Park” was gone and gone forever. Personally the weekend was a vindication that erased a bad memory and a redemption after a successful career in racing had at one time come to a poor ending. Not to mention that I have once again connected with something that has missing from my life for far too long.

This weekend was a collaboration between the American Kart Racing Association (AKRA), The Championship Enduro Series (CES) and the Dart Kart Group. Cooperation such as this is essential for the growth, even the survival of roadracing. Proof is in the 500+ entries that signed up for the weekend.

Shout outs must go to Bill McCutcheon of AKRA, Dave Larson of CES and to the entire Dart Kart group for their exceedingly warm welcome.

In the next installment I want to share some observations on the current state of kart roadracing and my suggestions to revitalize this important segment of our sport. Stay tuned, the thrill ride is just beginning. We went to have fun and big fun was had.