Admin Note: I’m reposting the Kartpulse Series ‘Old Dog, Old Tricks’ written by Kartpulse Contributor, Greg Wright in a series of posts on the forums. Interested to hear more from Greg and road racing? Check out his Kartpulse podcast that we did a few months back! (I’ll bug Greg to join the forums soon.) 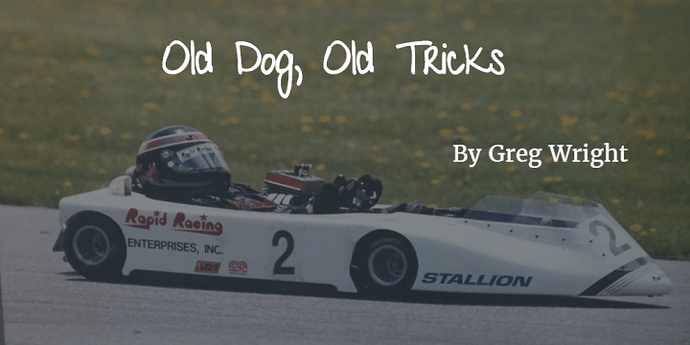 Behind the scenes the Dean Axe Vintage Racing Traveling Road Show has been preparing for one of the if not the biggest jewels in kart roadracing, Daytona KartWeek!

This season has been one of revelation, I had been away from roadracing for a full 15 years but thanks to the support and encouragement from “El Patron” Dean Axe I have come back to my roots.

One of the many attractions of roadracing karts is the venues, think about it, we’ve been to Mid-Ohio, one of the most famous road courses in North America, we raced at Michigan International Speedway on the oval/road course at a track that is the fastest non restrictor track in NASCAR and now we are preparing for the hallowed pavement of Daytona International Speedway for the 2016 edition of WKA’s historic Daytona KartWeek.

The cool factor is huge and in a recent conversation at my race shop a consensus was formed that kart racing is missing the boat by not emphasizing the “cool” factor and the “fun” factor. This stepping stone stuff is nothing but fluff, kart racing of all forms should be looked at for what it is and that’s cool and fun.

As we formed a plan of attack the very first thing on the list was to make sure that we performed an exorcism to permanently rid ourselves of the dreaded gremlin that haunted us most of the weekend at MIS.

Once said exorcism was vigorously performed several upgrades were performed including brakes and doing some creative aerodynamic enhancements by tucking as much away out of the air stream as possible. That can be a make or break deal on a track like Daytona with its long top end run.

Make no mistake about it; this will be an all out assault hoping to get results at one of the great karting roadrace events. I’ve been lucky enough to have stood on the top step of the podium during KartWeek five times along with uncountable top fives and top tens. It’s been a long time but I’m sure that we will hit our stride quickly once on the track.

Along with preparation of the '76 Margay Concept yours truly has been hitting the weights to make sure that I’m as prepared as the kart is.

The logistics of an adventure like this are daunting to say the least but I’m confident that with the support of Dean Axe and his crew, the amazing but still mysterious “Gooseman” (?), and my lovely and supportive wife Rebecca that we will at the very least make our mark on this year’s event.

It’s great to be back and the prime directive of this entire operation is “Have Fun”!!!

***Greg Wright is the owner and operator of Rapid Racing in Clermont Indiana, a full time full service kart racing supply since 1983.