Admin Note: I’m post the Kartpulse Series ‘Old Dog, Old Tricks’ written by Kartpulse Contributor, Greg Wright in a series of posts on the forums on his behalf. Interested to hear more from Greg and road racing? Check out his Kartpulse podcast that we did a few months back! (I’ll bug Greg to join the forums soon.)

Old Dogs, Old Tricks
Mid-Ohio 2017
The Rise of the Falcon 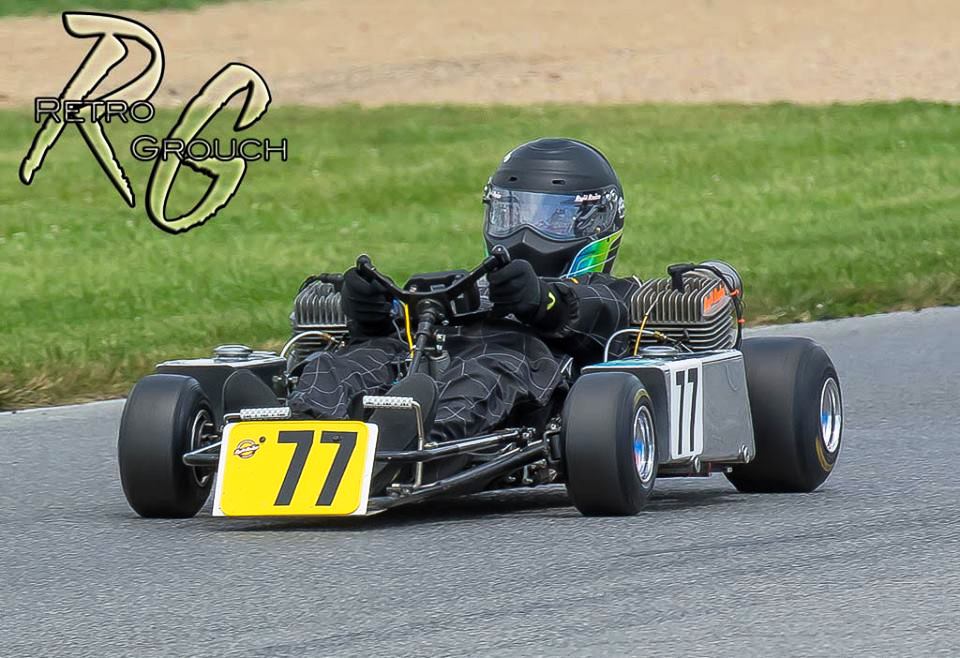 The unbelievable and unforgettable journey with the Dean Axe Vintage Racing Traveling Road Show continues with our last outing at this years combined AKRA/CES/DKC roadrace event at historical Mid-Ohio Sports Car Course run over the weekend of June 16, 17, 18.

Much like last year the turnout was gratifying to say the least, if I had a crystal ball I think it may well be the largest roadrace in the country for the second year in a row. ** Note; Final tally for Mid-Ohio was 576 entries over the three day event.

A big shout out has to go to the Dart Kart Club and Jerry and Susie Echols, Gene Davis and Chuck Bunnell for their tireless hard work that goes into the event. On the AKRA side kudos to Bill McCutcheon, Van Gilder and Tim Wilkerson. And of course the new and improved Dave Larson, majordomo of the CES Series. The welcome was awesome and much appreciated.

After several months of work the team had the Vintage Invader B-Stock twin laydown ready to roll thanks to untold hours of work by Dean Axe, Fred Trogldon and yours truly.

While gratifying I have to admit that getting this project finished was somewhat like mating elephants, it all occurs at a high level, there is lots of screaming that occurs and it takes a long time to get results.

But results we got, the beautiful black and polished aluminum twin engined beast was fast right off the trailer and continued to get quicker the entire weekend.

The twin engine experience is like nothing else in kart racing and is right on the edge of being surreal. When the first engine fires everything sounds normal, the exhaust note has it’s normal expected shrill tone but when the second engine lights up it becomes a slightly hoarse howl reminding me of the Starfighters in Star Wars.

Acceleration from our pit stall the first time of the weekend gave more than a clue as to what was in store during the days ahead. It would easily spin the tires from a standstill and immediately came up on its toes.

After a couple of “installation laps” it was time to start exploring the limits and it quickly became apparent that we had a tiger by the tail. After a few laps slowly pushing the limits lap after lap it was back to the pits to do a nut and bolt check and examine the gathered data.

After making a minor tire pressure change to resolve a very slight push it was back to more limit exploring quickly finding that we had way too much gear. Nothing to that right?? Well on a twin there are twice as many things to do, loosen both engine plus exhausts, change gears on both sides, adjust the clutches on both sides and button things back up.

Three men flailed away but it still took over an hour to get the deed done.

Back on the track, lap times fell lap after lap and the twin engined beast began to live up to its new nickname of the “Millennium Falcon” and impressed both this old veteran and various pit lane denizens.

The experience is difficult to describe, acceleration is instantaneous and nearly breathtaking and the aural drama produced by the twin exhausts is almost intoxicating and LOUD!!! (Need better ear plugs, ears still ringing!!)

Perhaps where it showed the most personality though was on the long (5/8th+ mile long) back straight. Coming off the famous “Keyhole” corner fighting slight wheel spin the two engines produced that “Starfighter” howl and rocketed down the ensuing straight. Very enticing but about half way down right at the slight right hand kink the tone of the engines deepened and it would begin a top end run that could only be described as euphoric. Both the track and other machines would rush towards you reminding you of some insane video game quickly passing the 100 mph mark and continuing hard until reaching the braking markers at the end of the straight.

At this point the track closed for a lunch break and Dean, Goose and myself felt like we were ahead of the curve. Well ahead of the curve until we made an innocuous change that caused us to fall on our own swords and quickly roasting a piston in the right hand engine.

After a surprisingly quick engine change upon fire up things clearly weren’t right and a long session of ‘What the hell” took up most of the afternoon until the dirty culprit was unearthed.

Practice had ended for the day and satisfied that we had found the problem (We did) the three amigos of Dean, Goose and myself celebrated our outing at a local Mexican restaurant over ice cold beers and burritos the size of a Volkswagen.

Saturday morning dawned clear and HOT and after a nourishing breakfast at Mickey D’s (??) it was off to the track for the first race day.

After an entertaining drivers meeting led by Chuck Bunnell and Jerry Echols practice began and as luck would have it we were the first group out. After one lap at 75% to warm the tires I laid into the throttles on the “Falcon”. After the first half lap two things were obvious, we had fixed our self induced issue and it was stronger than ever. Lap after lap we set our personal best lap times each one quicker than the one before. The session ended and I made the decision to stand pat on the set up and wait for Vintage Unlimited Final 1 with nothing more than a minor clutch tweak.

A quick comment on the set up, all weekend long we tuned very conservatively, the carbs were fat, the clutches were low, the pipes were long. There was much more performance to be had but for this first outing consistency and reliability was the driving force when it came to set up.

The “Falcon” was one of only two twin engined rigs on the line with the other piloted by roadrace veteran Bob Cole. The rest of the Unlimited field consisted of vintage B-Bombs, BM130s, 100cc opens on alcohol and others.

Using the typical multi flag start the race began with us in the third wave 20 seconds after the first group took the green. Big Daddy Don Garlits would have been proud of the way the “Falcon” came off the line quickly dispatching all the cars in our group and going deeply into the second wave before the end of the first lap.

With 80+ cars on the track traffic was constant and we bobbed and weaved our way through the leading groups and were up front in a very few laps. At that point it was “Sayonara Baby” and we led the rest of the way finishing a full two laps over second place and setting a personal best lap time on the final lap!! The speed differential between the “Falcon” and the congested traffic ranged from startling to terrifying with at times a 30+ mph closing rate!!

After the race and having the opportunity to somehow get cooled off from the hot and humid conditions we did nothing more than routine maintenance and then schemed on the upcoming Sunday race day over a few uhhhhhhhh cold beverages.

Sunday morning arrived with threatening weather, the TV and cell phone reports were all “sturm und drang” (Google it) with forecasts of heavy storms in the morning and severe storms in the afternoon.

Despite the seemingly impending doom the day and the schedule went ahead as per normal. The first practice session it was again clear that the “Falcon” had not lost any pace despite a strangely slick track surface. Again I made the call to park it until race time hoping that we weren’t overly confident.

Over and over the dark clouds above threatened and the wind often freshened which is normally a harbinger of approaching rain but by some sort of miracle it stayed away and eventually turned pleasant with milder temperatures than the day before.

Slowly the clock counted down to race time and upon arriving at the grid we find a much depleted field of Vintage Unlimiteds with many of the much vaunted 70s era Italian engines having breathed their last breath of the weekend the day before.

This time the “Falcon” moved into the 56th grid slot and the butterflies in my stomach were approaching the size of a California Condor.

Only two flags were used on this start with us in the second wave. On the start the “Falcon” leapt off the line only to come to a rush hour style traffic jam exiting the pit lane. Once under the first turn bridge I merely pulled to the right side of the track and dispatched all of wave two and quickly caught the tail enders of the first wave before the end of lap one.

Passing cars when I got to them rather than when I had the chance we emerged into the overall lead in a handful of laps. Although the traffic remained congested we somehow went on to set personal best lap times over and over again eventually taking over 1 ½ seconds off our Saturday best.

I have done a lot of racing in my life and it’s not unusual to be hoping for the checkers to fall to end the race. Not this time though, I was almost disappointed to see the race end. I have always enjoyed the race track experience but after a weekend piloting the “Falcon” I’ll state that I had some of the most fun ever running this awesome machine. Once again we finished two full laps ahead of second place Dave Corwin.

There are several Vintage Unlimited machines in process as this is being written and I warmly welcome more entries and competition. Racing for not much more than thrills and fun is a great way to go. Highly recommended to anybody that is remotely interested.

At this time I’m not exactly sure of the next outing for the Dean Axe Vintage Racing Traveling Road Show but our quest for speed and fun will continue through the season with the final event of the season at the “Birthplace of speed” Daytona International Speedway”!

I have to once again give a heartfelt thanks to my dear friend Dean Axe, the ever faithful Gooseman (?) and all the helpers, friends, fans and competitors that make this sport what it is. 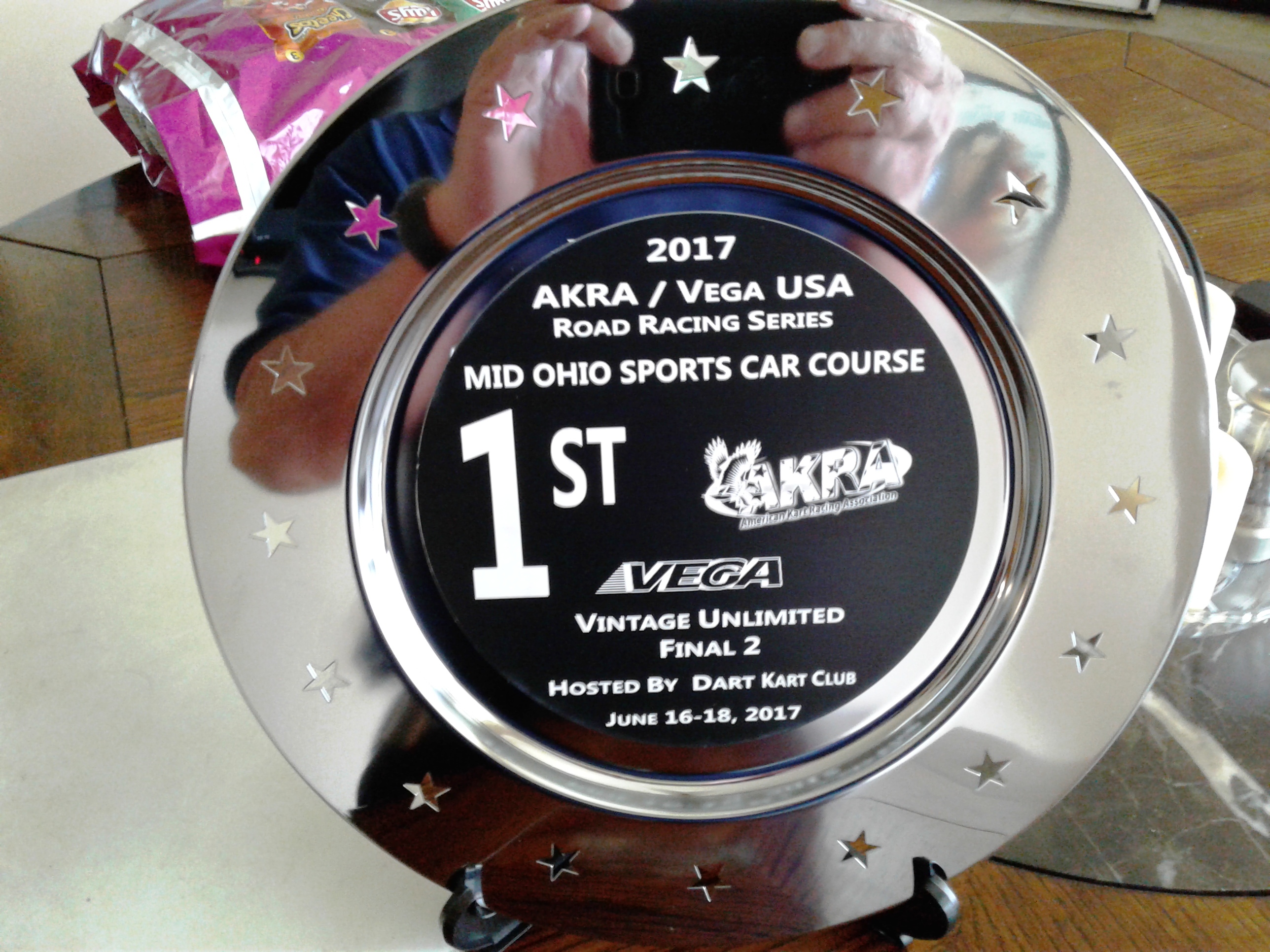 **Greg Wright is the owner and operator of Rapid Racing Inc. outside of Indianapolis Indiana. A full time, full service kart shop since 1983.