Admin Note: I’m reposting the Kartpulse Series ‘Old Dog, Old Tricks’ written by Kartpulse Contributor, Greg Wright in a series of posts on the forums. Interested to hear more from Greg and road racing? Check out his Kartpulse podcast that we did a few months back! (I’ll bug Greg to join the forums soon.)

Old Dogs, Old Tricks
Part VII
Into Each Life Some Rain Must Fall

Although I guess technically our season began back in late December at Daytona International Speedway the 2017 season for the Dean Axe Vintage Racing Traveling Road Show has officially begun.

On Friday May 20th I along with the mysterious Gooseman (?) began the trek North to MIS. Upon leaving the palatial surroundings of Rapid Racing with sunny skies and temps in the high 70s we had some surprises in store.

Arriving four hours later at MIS with rain and temps below 50 degrees things looked bleak. However to brighten things up once we arrived amazingly Team Principal Dean Axe somehow pulled into the track right behind us.

After the normal routine of signing for pit passes, registration and safety tech our work for the day was done. Staying in Brooklyn Michigan somehow Dean sniffed out a local pub where we proceeded to drink to one another’s health while discussing our plans for the weekend. Oh yeah it was raining heavily outside at this time.

Getting up Saturday morning to head to the track we were greeted with temps in the mid 40s and a lead grey sky. At the drivers meeting it was announced that heavy weather was threatening in the afternoon and a compressed schedule was approved by a narrow margin by the drivers in attendance.

Practice one was uneventful and I suggested some small but significant changes to the setup. Practice two was more of the same confirming that the changes had gone in a positive direction.

However the cranky driver (me) was complaining about a loose condition after a few laps. Dean and Goose promptly made a small change in the rear track width and bolted on a new set of tires. Skipping the final practice session we prepared for our event that had become race number two due to the schedule change.

As always those of us in the Vintage division were relegated to start as the last group in the race with a respectable ten machine on the Vintage grid.

Green flag!! And the race was on. Both Greg Odell and Joel Walworth showed good pace in the early going and we traded the lead back and forth for a handful of laps before I emerged into the lead and began to slowly pull away.

All was going by plan right? Well not exactly. By the 8th lap the Margay Concept again developed a very loose condition getting worse by the lap. Sprint car king Steve Kinser would have been proud of how sideways the machine was running in the infield section of the road course. Before long Greg Odell had closed the gap and retook the lead. I valiantly tried to hang with him but driving around sideways half the time allowed Greg to begin to pull away.

Running in a comfortable second in a machine that got looser by the lap, I decided to just bring it home to the finish. 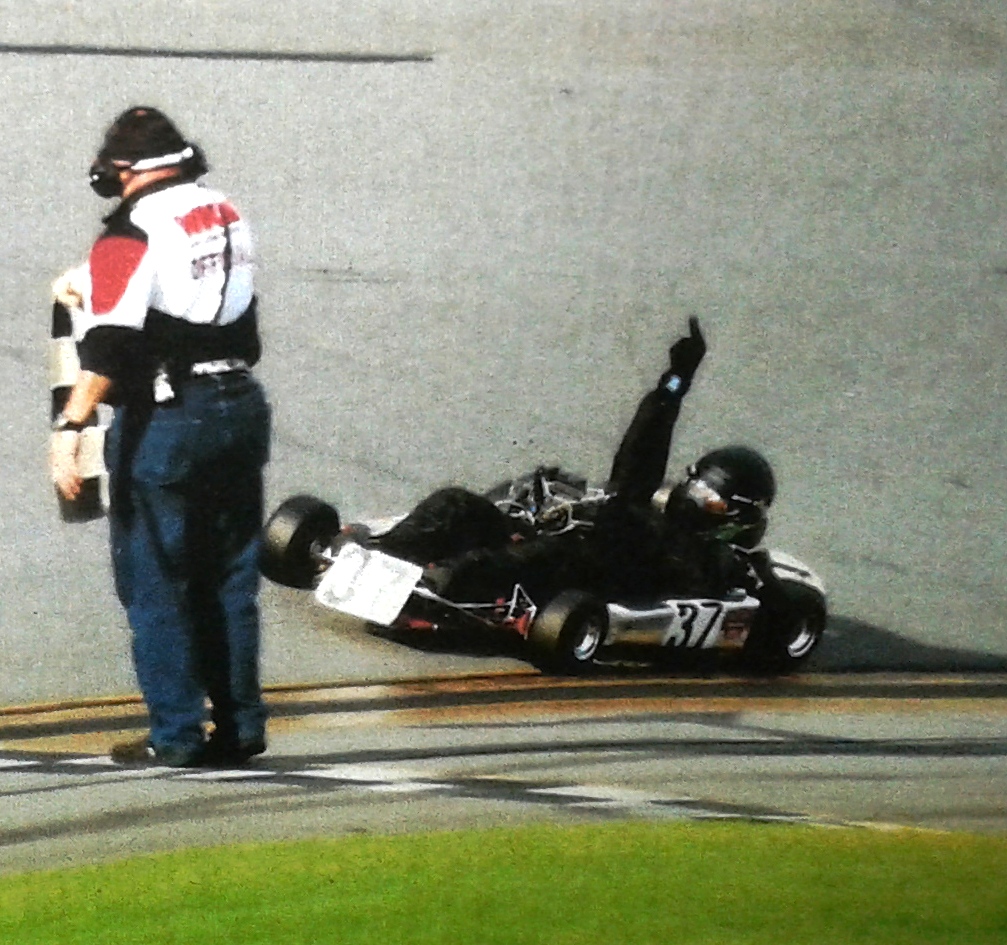 Then with a handful of laps remaining it began to sprinkle rain. Going by the flagman I pointed to the sky to inform him of rain on parts of the track. The next lap it began to rain a little harder and this time I not only pointed at the sky but made little sprinkling rain motions with my fingers.

Then the overly loose condition took on a new personality and the kart began to weave slightly under hard braking going into the first turn. The laps ground on despite the increasing rain until suddenly the checkered flag appeared ending the race several laps early.

I thought to myself “Self!! It looks like you made it.” And under braking going into the first turn off the oval into the infield section the kart did a wicked “tank slapper” wiggle and it was clear that something was very wrong.

Not wanting to check up too much because of karts coming up behind me at over 100 mph I cautiously accelerated out of the first turn heading for the first left hander. Upon turning in the left front corner of the kart took a dive toward the track as the spindle broke.

Somehow the wheel went under the front of the Concept and launched me into the air where I did a half spin in the air before pan caking back onto the track surface with a resounding thud.

Was it over then? Nope not at all. The left front wheel with half the spindle and brake disc attached ran right over the top of me giving my knee cap a nice goose egg before seemingly disappearing into the stratosphere.

As I sat backwards in the middle of the track I was treated to a pack of several karts coming around the corner directly at me, but thankfully somehow, someway they missed me.

With some help from old friend Marty Powers who had dropped out earlier at the same spot we dragged the now three wheeled kart off the racing surface before going on a safari looking for my left front wheel. Walking through the grass a track worker motioned that the wheel had gone “thataway” and we found it a couple of hundreds of yards away from where I had landed in an ignominious heap.

Nonetheless we had finished the race and were credited with a second place finish so we did get to take something home from the weekend even if it was a beer mug with logos on it.

The Sunday portion of the event was canceled with nearly 100% chance of storms all day long. During the post race debriefing it appeared that Team Principal Dean was feeling badly about the incident but in racing you can’t use any of the “Would have, could have, should have” excuses for what happened and quickly planned to move forward.

The next stop on our schedule will be mid June at my favorite track the Mid-Ohio Sports Car Course. With a little luck on our side we just may debut the Twin Engine Vintage Kart at that time.

I have to publicly thank my dear friend Dean Axe for these wonderful opportunities and anxiously look forward to our next outing.

Until next time make sure that you kick ass, take names and make sure you have fun whatever you do.

**Greg Wright is the owner and operator of Rapid Racing Inc. a full time, full service kart racing shop since 1983