I’m excited for our electric performance future! Gobs of torque, hard acceleration, less motor noise and vibration will allow a closer connection to the feel and noise of the tires, less maintenance, easier to build tracks closer to the NIMBY crowd. I love the sound of a two stroke but I care more about performance. When e-karts surpass ice karts I’ll welcome the future!

I am sort of with you.

I do think the electric future is one that has mainly positives.

From a drivers perspective, the power delivery is ideal.

However, current weight is a problem. Leaving that aside, my greatest fear is loss of sensation.

Not “feel”, there’s plenty of that coming up the tires and steering column. But the feeling of driving a car. The pistons firing and the car sympathetically resonating.

That, I will miss.

I speculate that weight will only be a problem until the next generation of battery tech is developed. If solid state, or whatever, can double or triple energy density the weight problem is no longer.

I also don’t see ICE cars ever fully going away. They’ll end up like horses: around but not as common as they once were. My Miata will still be around in 30 years and vintage karts will still be an option. By that point you’ll probably be able to 3D print replacement parts for your ka100 if that tickles your fancy.

I want to build a hybrid electric but don’t really have the funds so just gonna wait till someone comes out with one that is sweet.

Aaron, I think that somewhere between a single engine 4 cycle Kart with maybe 7 or 8 horsepower and a fire belching 10,000 horsepower AA/FD dragster/Funnycar, electric high performance vehicles will find a balance and a home. I will predict that never in our lifetimes will electricity out preform Nitromethane. Maybe one day in the future will scientists be able to make electric motors light enough and batteries light enough, but to still make 10,000 HP but I have my doubts . That said, I will never even walk across the street for the dubious pleasure of watching karts running around a track in near silence. The charm, and charisma, and excitement is utterly absent.

Different strokes, right? No amount of noise, tire smoke, or speed could convince me to watch more than one pass of a drag car: if you’ve seen one… At least to me.

It is funny to me that the Pikes Peak record has been held by an EV for nearly 3 years but the myth that electric race vehicles are silent still persists. The ID.r sounds like flippin’ turbine spooling up. Videos are all over the internet. Even if the motors were silent there would still be significant tire noise.

Also, for better or worse, karting is much more a participant sport than a spectator sport so it doesn’t really matter if you’d watch or not. If e-karts make the sport more accessible by way of being cheaper or requiring less maintenance it will be a positive for the sport. Additionally, less noise does have the significant benefit of making it less likely that new neighbors and their HOAs get tracks shut down.

I know so little about the electric karts. Can you tell me how much a 12 HP electric motor weighs? How competitive would that motor be? How big of a battery what it takes to power that motor through a day of racing?

Of course you could put it on the charger between the heats! People could bring their own generators.

Would the track have to wire each pit area with with an electrical outlet? How many outlets would you need? I really have no idea myself, wouldn’t that put a big drain on the local power supply? How, and who, would pay for all the electricity? Obviously the racers would be the ones paying for it, but how would that work out?

Al, in indoor Rental places they have permanent stations similar to full size tesla charger. The karts are kept on the chargers between heats. The battery packs appear to be similar in size to what @hallkbrdz was assembling. They also appear to put the batteries sort of where sidepods are.

@AaronT- I’m late to the party, but feel compelled to weigh in…This makes me question whether or not you’re actually human. Engine noise, and by association exhaust noise, is THE best part of an internal combustion engine. Period.

Karting for many of us is a labor of love.

Can we outfit the equipment to be lower maintenance? Maybe, but how many of us actually love the process of tinkering on the weekdays after work to prepare for a race day? Or staying late at the track on Friday to ensure everything is perfect for race day?

) to squeeze every last drop out of a given rulebook, because finding the marginal gains is what is most rewarding.

To @Bill’s point, think about the romanticism of hearing a race track in the distance. I’m lucky enough to live within a mile of a small paved oval, and the first time that I hear cars on track every year makes me grin from ear to ear. Hearing the sound of Late Models getting after it at 10:00pm on Saturday night will never get old. Think about walking up to the Indianapolis Motor Speedway on Carb Day to the sound of nothing but tire noise and a faint high-pitched whine. I have a tough time imagining a world where I’m watching a Sprint Car race and the field is entirely electric. I try to carry a progressive mindset, but this is the one issue that I foresee clinging onto until the grave. Racing is a sensory experience, whether as a participant, or as a spectator. Remove sound (in the form of engine noise), and the overall experience is diminished. No matter what. 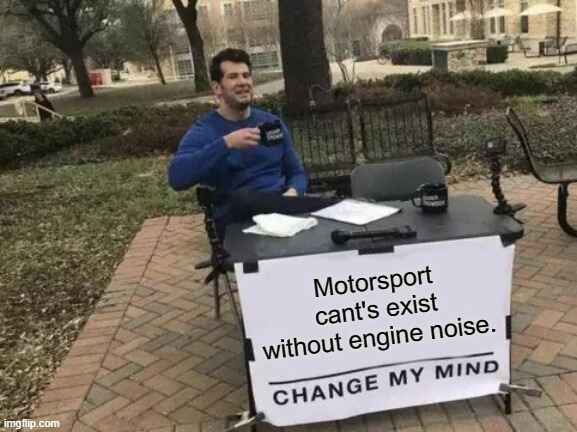 As a driver while I’d like to have my kart go brrrrrrrr I will still drive a kart that goes Eeeeeeeee.

I think it’s rather likely that motorsports will continue to exist if electric. Presumably we would switch to more hybrid in car racing, first. Over time who knows what we get.

I’d rather be optimistic about this than pronounce racing dead for lack of braaaaaap. I certainly wouldn’t stop just because E-Kart. But, in its current form, it’s unclear to me how owner E-karting would work. I am concerned that it will make independent (non-team) Karting a challenge. There’s likely a steep initial investment in rapid charge tech that would be out of budget for most individuals.

Some great electric kart stuff to get your teeth stuck into here: https://forums.kartpulse.com/tags/electric_karts

The power requirements for a typical kart race are pretty significant… makes you appreciate how energy dense fuels are.

Wet nitrous would do the trick. I have one of these ECU’s and I’m considering using it on one of the 460cc engines I have… https://wiki.speeduino.com/en/configuration/Nitrous_Control

I know so little about the electric karts. Can you tell me how much a 12 HP electric motor weighs? How competitive would that motor be? How big of a battery what it takes to power that motor through a day of racing?

Al, a good quality US-designed water-cooled permanent magnet AC electric motor that can produce 15 HP continuously, and makes 30 ft lbs of torque weighs 13 lbs. A Chineasium air-cooled one, about 47 lbs. In addition to that you also need one or more batteries, a controller/inverter that turns the DC battery voltage into 3-phase AC, and a battery management to ensure that everything is operating safely. So yes, more weight. Plus the off-kart charger.

None of it is cheap initially either, roughly 2.5 - 3 times the cost for the running gear compared to a 2-stroke. And yes charging is a pain, especially in the US with our commonly available (or not at tracks) low-current 120vac system. But like anything EV, the win is in the long term operating costs. Given normal kart seasons and practices, current lithium-ion batteries should be race-worthy for about 10 years. The only wear parts are the two outer bearings in the motor, normally designed for thousands of operating hours. Electricity costs are CHEAP. To charge my 5.5kWh battery from “empty” to full at 9.8 cents/kWh (about 5kWh), with losses, is about $0.64. Commercial rate would be about 20-30% lower. Not much compared to C12 fuel, plus racing oil costs.

Where I see EV kart acceptance first is with kid karts, and then kadet. They can use the smaller, less expensive motors, need much smaller and less expensive batteries to drive them, and smaller controller/inverters.

I have nothing against hydrocarbon engines, I even work for an O&G company. There is absolutely no comparison in the energy density of hydrocarbons to today’s batteries, and I doubt there ever will be. And while I didn’t care about getting a face of oily smoke exhaust in the pits, I didn’t mind the sound and vibration that much. But after a first year of dealing with a temperamental Honda 2-stroke, and listening to some of the comments from parents with small kids about the same (smoke), I tried to push higher HP low-stressed cleaner running 4-stroke engines as a lower-maintenance step up from 206. Something in-between the 206 and 2Ts. Our karting club would hear nothing of it. So I decided if I was going to spend the money, I might as well make something as fast and fun as I possibly could, as well as low maintenance. Something I could just show up with, turn on, and go. Something that is reliable and smooth running. I’m not getting any younger (54) and I don’t really care about pure competition or points. I just want to have fun pulling Gs, and learn (a lot) about EVs at the same time.

My parts costs (no labor) for my continuous 46 Hp, 89 ft lb motor, controller/inverter, BMS, battery (1), cabling, display, etc is a little over $7k. It is designed to go up against TAG karts for a practice, qualifier, then recharge. Then the heat race, quick charge, and the main. A second/third battery would be nice to avoid having to bring a 240v generator to recharge in 45 minutes, at about $1900 extra each. But this is the “high” end, at least with today’s technology. At this point I’m waiting on the motor (delayed in production 6 months due to the wuhan flu, of course). Going crazy waiting…

Haha, why should I waste time convincing you of anything?

Anything non-ethanol, not super picky where I get it from. . . .

Ok yeah this got a bit off-topic.

The meme was more just for effect…

If speed is really a top priority then maybe road racing (long track) would be worth checking out. Someone on here is in the middle of a twin KZ build that I’m sure will be QUITE fast.

I’d be all for something like LO206 switching over to electric, but the faster categories need to brap.

I think you should do the math on this!

I think you should do the math on this!

I don’t understand what you are saying. Those are the manufacture’s tested specifications. These motors aren’t anything like your garden variety $200 AC induction motors that only make a couple HP for the same weight.