The Engine Builder Debate in Lo206

So here in the southeast (Florida, Georgia, Carolinas) people in Lo206 seem to be flocking toward the “White Rino” aka Stewart Racing Engines. I know there was a bit of tech scandle as of late involving Stewart Engines, but aside from that, they are gaining in popularity none the less in the southeast.

So I had a recent opportunity to race a kart with a White Rino, and I had some takeaways . . .

SMOOTH- From Idle to wide open throttle, it was a very smooth running engine. (By contrast, I run a TS Racing Engine) From a smooth power delivery perspective, it was like night and day compared to what I run. How is that possible given spec class characteristics of the Briggs, I have no clue.

However, I’ll preface this by saying I have only run two Lo206 engines (TS Racing and Stewart Racing) the Stewart engine had zero mid range torque compared to my TS Racing Engine motor. Again, being no expert- I have no idea why that is; but I found it very interesting being the track and gearing factors were “nearly” identical for the purposes of my experience. I’ll also say, on the top end, the Stewart Engine pulled like a mule in comparison to my TS Engine.

So the Dominate Names in Lo206 where I reside (southeast) are: (In no particular order)

With Stewart the claim to fame (trackside) is support. I don’t know Stewart, I’ve never met him, but those who buy his engines say the trackside support is second to none. If he see’s a motor in the pits that bears his name, he stops buy and asks how you did, and if it didn’t perform as expected, the guy will start trouble shooting or begin turning wrenches himself. With that kind of dedication alot of people are moving in that direction as the track support seems second to none.

But it got me thinking, what are YOUR experiences with the engine builders and track support? In my mind, with such limited things these engine builders can do, what makes you to prefer one engine builder over another? From what I hear Stewart (Just as an example) has a very intimate relationship with his dyno when tuning his engines, which is why (some) claim his engines can squeak out wins in tight fields where a tenth of a second maters.

I can’t say which way is up on this one. I have personally met two engine builders, and if it was a popularity contest, I have my favorite (he is also a member of KP) so I’m biased in that regard.

But what is your experiences where your from? Where people are racing a spec class and any little advantage is viewed as a game changer in the top 10 in the fields . . .

My opinion is that engine tuning these days is worth a tenth or two, chassis setup is with maybe half a second or eight tenths, and driving is worth seconds. I prioritize them accordingly. When you’re within a tenth of the top-tier drivers, then I would worry about switching engine builders.

I find builders value loyalty, and I try to respect that as well. I would prioritize knowledge, dependability, individual attention, and a generally personable attitude over which engine builder is the “hot” one this month.

Maybe it’s different on the 206 side but in my 2-stroke career I’ve driven engines from a number of builders and the “best” builders engines are all basically the same feeling. There are maybe some little tricks here and there to differentiate one from another, but it’s very rare that you get “out-motored” if running a reputable builder’s stuff.

In summary, find a guy who knows what he is doing, has proven it, and build a relationship with that builder/stick with them. In 20 years I’ve really only used about 3 different builders. I’ve been running Innovative engines for the past 7 years. 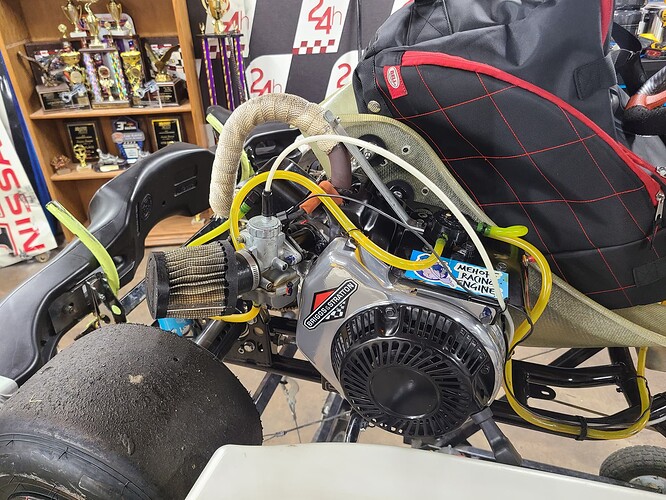 MEHOFF builds my engine because no one beats them.

Reality is IMHO if your not a top racer for XY or Z your likely not getting the top equipment. That isnt to say you will get garbage but likely the number 1 team/driver will get preferred engines.

I have atleast 4 engines worth of parts in my single race 206 and still room for improvements just have not found the parts.(Since I keep it legal) My other engines are simply not as good due to parts quality and thats the truth.

I would second TJ’s comments. In 206, I really dont see much of a difference between builders. There are always a ton of builders in the top ten of an ignite challenge race, which rules out the chassis being a difference.

I run with my builder because I can call him with whatever and he’ll walk me through what he would do. If there’s an issue, they’ll take the motor back and fix it. With it being such a spec motor and not much the builders can actually do, part of me wonders if the only real way to go about it (if money was no problem) would be to buy several motors, dyno them all, and then go with the one that produces the most power or has the best powerband. I’m pretty sure Swedetech did that once with kid kart motors. Bought some astronomical quantity, like 30 motors, then sold the best one for some crazy amount and sold the rest for regular amounts. Not practical, but an interesting experiment.

Long story short, I think the actual difference between builders for 206 is really not enough to make a difference. I think its more important to nail the carburetion setup for the day than it is to have the right builder.

part of me wonders if the only real way to go about it (if money was no problem) would be to buy several motors, dyno them all, and then go with the one that produces the most power or has the best powerband. I’m pretty sure Swedetech did that once with kid kart motors. Bought some astronomical quantity, like 30 motors, then sold the best one for some crazy amount and sold the rest for regular amounts. Not practical, but an interesting experiment.

This is standard practice in spec-series here in the UK.

I’m pretty sure Swedetech did that once with kid kart motors. Bought some astronomical quantity, like 30 motors, then sold the best one for some crazy amount and sold the rest for regular amounts. Not practical, but an interesting experiment.

This was standard practice for Yamaha or Komet back in the day. Same thing with carbs. Less practical now that engines are much closer from factory and tech is far tighter.

At this point in 206 racing, all engine builders are doing about everything that can legally be done to make the 206’s go the best. Every single top engine builder has gotten their competitors engines in for rebuilds and seen their carb settings, overhead trick, etc. There are not many secrets left out there.

I’m gonna tell another little secret that most wont believe:

Find a builder you like and trust. One in your price range. Build that relationship, support each other and ask questions. If you want to go fast, keep the oil changed, keep to your rebuild schedule so that the valves stay sealed, and work on kart set up and driving. Most importantly, have fun!

If you want to go fast, keep the oil changed, keep to your rebuild schedule so that the valves stay sealed, and work on kart set up and driving.

I can switch chassis and gain/lose multiple tenths on a 33 second track. I can switch engines with anyone and not lose a thousandth.

You have to work really hard to screw up and tune an engine badly at this point.

I use the guy closest to my house to do my engines.

I’ve used Ghost and would recommend them to anyone. They still help me out a ton, even though I’m a traitor.

I’ve driven Kart City, Comet, Jimbo, Carlson, out of the box, and a few others. The only thing that stands out with some engine builders is support.

If it makes no difference, how do your customers react when you tell them that? Do they still ask you to push it?

Depends on the customer. We are always trying to help/save people money.

However, some guys want to know they have the best (read as: every junior dad out there) regardless if it makes a difference or not.

We do what the customers want. Some want a good engine at a good price. These we optimize, break in, dyno tune, and send on their way.

Other customers send us 5 carbs, 5 heads, and 5 short blocks and have us assemble the best. We charge them for our time accordingly.

If it helps some understand, my personal engine is one I put our generic tune on and run. I don’t feel it’s worth my own time to do anything more.