Thoughts on a seat guard?

So I ground a hole in my seat last year, and replacing it was a general pain in the ass due to the fact that I come in soaking wet at 145 and that means almost 50lbs of lead for seniors, along with other troubles that may arise.

I was thinking a while ago then, what about a seat guard that attached to the bottom of the kart and protected your seat from getting scraped up? I figure it could attach at the bottom tabs at the front and by the rear along the rails. It could just slide along the rail so it doesn’t bind the kart at all. Would there be a market for this? Is a concept like this even legal to use or would they disagree with it?

I know there’s the easy solution of “drive better so that doesn’t become an issue,” but I’ve seen a few people with the same issue just from driving on a rough track and finding one bump through a turn or something like that. At my track turn one has a runoff in case you accidentally run wide or get pushed off, which means riding the whole curb at corner exit, which I could see going through a seat very easily.

I get ideas like this all the time. They usually amount to nothing right now but I like looking into them a little bit

Seems worth investigating. TJ might be able to other assistance as his dad does seats.

Things to think about is, the seat is getting damaged because its so low it touches the ground occasionally, so if you put anything below it the “plate” will touch the ground more and maybe drag.

There is also a rule in some classes (certainly ones following CIK rules) about the floor extending beyond the cross rail in front of the seat. This is stop people making diffusers to gain ground effect.

But I think for most racers in the US this won’t matter.

I was figuring this would be a thin(ish) fiberglass that was almost touching the seat, ideally under 4 mm (under 3 is optimal but I want these to last for a while as well).

I know my seat is flush with the bottom of the frame rails, if I remember correctly, due to my height. I’m not sure how raising the seat would affect the handling of the kart and if it is a change you can undo with a tuning adjustment.

The idea was that this goes on the bottom of the tab so you can undo the nut and the guard comes off without needing to take the whole seat. I’d color the last layer with an indicator so a quick check can say if you are close to wearing through.

I figured there might be a ground effects rule in some rulebooks. If that didn’t exist I’d expect to see trays on almost every kart extending to the back. What are they considering a floor here, a solid sheet of material? If so, would it matter or raise issue if there were strips of fiberglass instead of a sheet, connected every couple inches?

I would run a thin plate of titanium. Seriously.
They also sell titanium foil that has excellent scrape and impact resistance.

How flexible is titanium though? I want something with a little give to minimize it’s affect on the kart

I don’t have the IKF rulebook at my house to check, but per the SKUSA rules:

20.2.7.9. Aerodynamics 20.2.7.9.1. Floor Pan: Floor Pans are not allowed to extend rearward past the front seat mount/crossbar, and must be inside the frame rails and securely bolted in place.

I’ve never seen a rule saying you cant mount something to the seat itself, but it would probably be looked at if it extended passed the bottom of the seat.

Not sure if there would be a market, most folks are kinda conditioned to just fixing the bottom. But you never know, especially with folks coming through in 206 classes, they might be into it?

Mock one up, try it, talk about it and see how people respond.

If you go too thick with padding\protection underneath you can end up sliding on it over bumps and kerbs. The result is massive skids, which looks cool, and it’s fun, but slow. Kinda tickles the butt in weird ways too.

My second kart came with a thin steel plate riveted on the bottom of the seat.

How flexible is titanium though? I want something with a little give to minimize it’s affect on the kart

Very, and not very. It is still flexible, but it is also really, really springy.

It is the ideal material for an impact shield.

Kind of piggy-backing on what Nik said, the reason people grind their seats down is because they’re set low in the kart (usually tall guys). If you put some kind of skid plate under there, you’re going to scrap more and you’ll be limited how low you can go with the seat.

We always just re-glass the bottom of the seat if it gets too damaged, but I don’t usually have that issue because mine is mounted so high.

My dad makes skid plates and seats, maybe we can convince him to combine the two. @Tim

And I agree with TKC’s comment about titanium, just based on the cool factor of the spark shower that would result.

I totally understand the struggle of having 50lbs of lead on your seat and having to replace it, but it’s like 6 bolts and with two people you can lift it right out, so it isn’t THAT big of a pain.

totally understand the struggle of having 50lbs of lead on your seat and having to replace it, but it’s like 6 bolts and with two people you can lift it right out, so it isn’t THAT big of a pain.

No kidding. Try moving 50lbs of lard from your abdomen

I run aluminum tape (or aircraft tape) on the bottom of my seat, so that when my seat bottoms out, it scrapes at that, rather than the fiber-glass. Saved me a seat or two.

Yeah, I wasn’t thinking this would be a thick sheet of protection. Ideally it would be thin enough to not be hit unless you would’ve been hitting the seat without it.

Titanium would work too now that I’ve looked at it. I wasn’t thinking much about materials as I hadn’t put a whole lot of thought into anything yet. I was just thinking fiberglass since I know how to lay that, but if the design I had thought of worked it wouldn’t be hard to do metalwork either.

Thinking about it now I feel like fiberglass would be more likely to puncture a tire if something serious happens and the plate gets ripped off or something of the sort. Sparks are fun though, reminds me of when they have the vintage F1 cars at Road America going up the hill. First race of my first trip back when I was 8 and I remember it to this day. It’s more expensive than, say, aluminum, but stronger so I could make the guard thinner.

You are totally right about it a relatively minor issue overall though. This is just something we thought about when my dad and I changed seats mid season.

@KartingIsLife I’m in the opposite boat, as I said before. Kinda makes lifting the kart a PITA.

Bumping this thread. Ran my first practice session last week and found my seat was rubbing. Inspected it the day after and saw the seat had a lot of wear marks and almost about to crack. My question is, is it still salvageable? Can I just buy some fiberglass repair kit and patch it? I plan on ordering some aluminum tape like DavinRS recommends to put under the seat to help with it, but still debating if I should just repair or order a new seat. 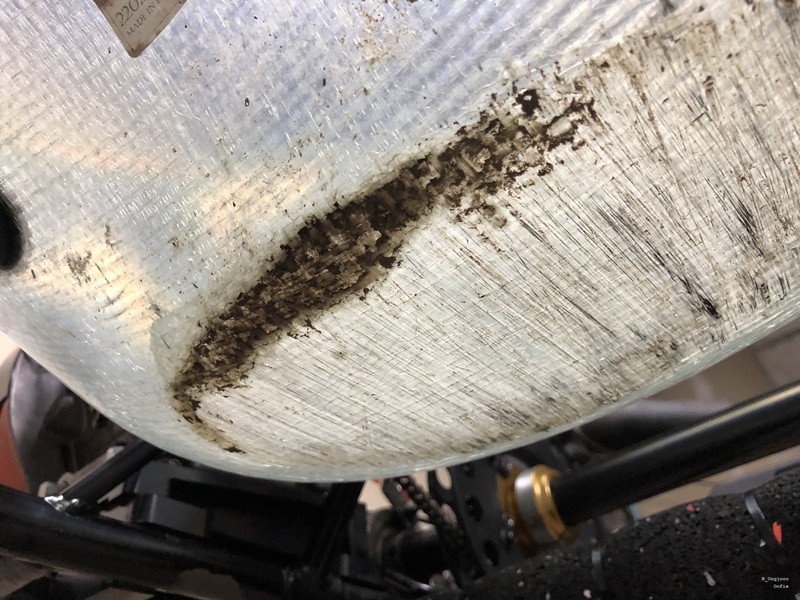 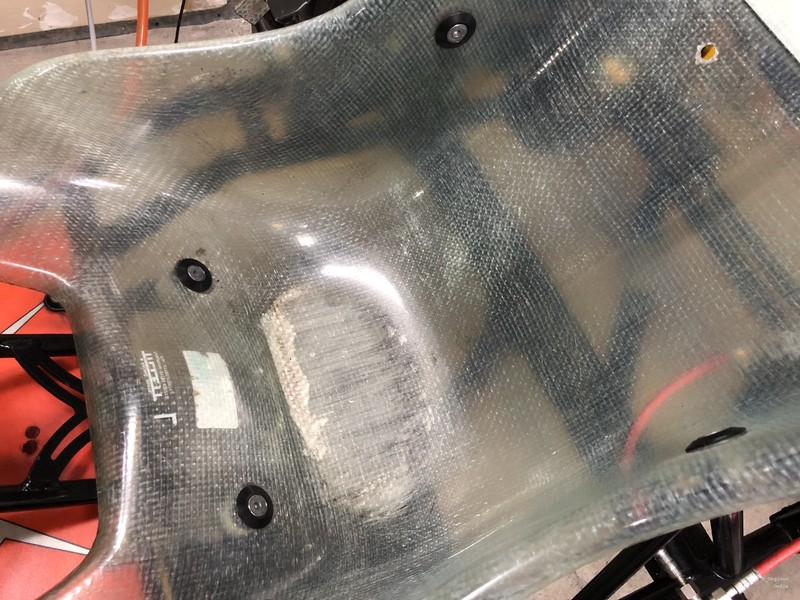 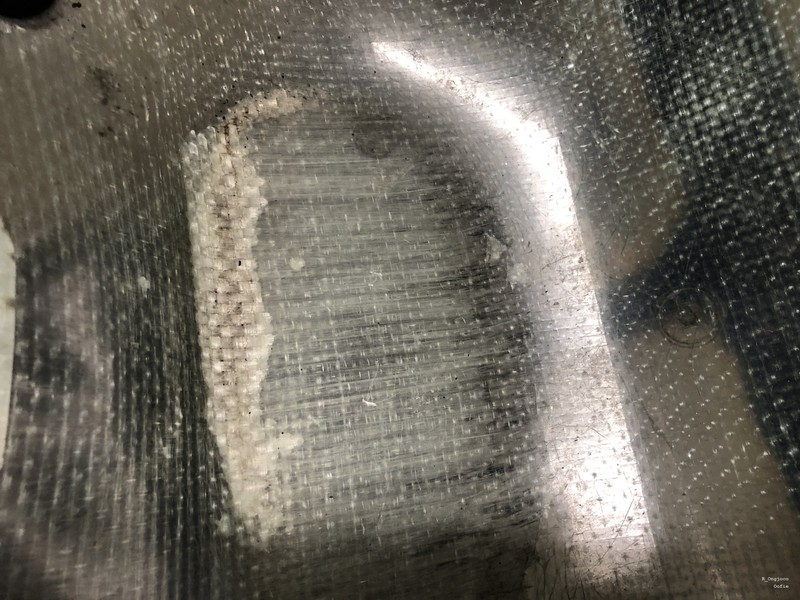 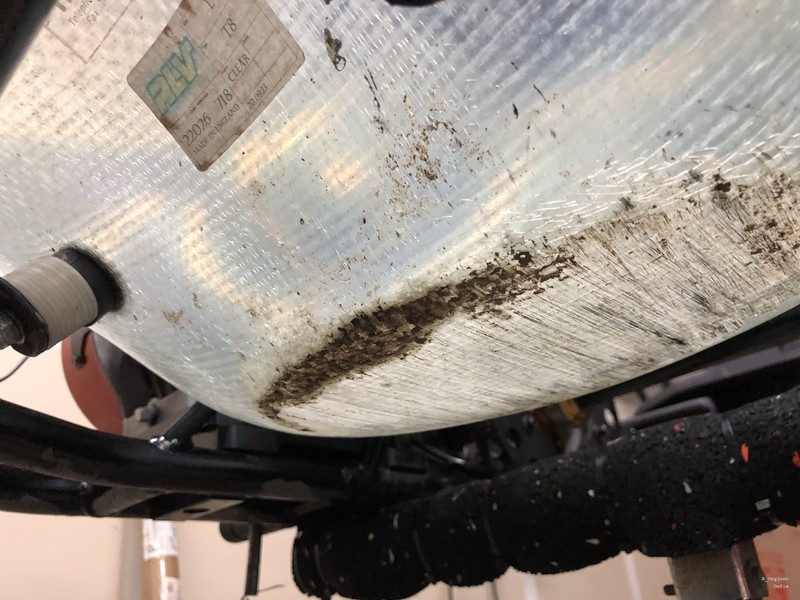 That’s not too badly damaged at all.

Lots of people patch with fiberglass, you’re good there.
A sheet of thin steel riveted on there makes for cool sparks though.

Yeah that seat is fine.

Thanks James and Davin!

There is already some flex if I push from under the seat as there is significant fiberglass layer missing in the middle of the darker area, but I guess once I patch it, it will be good again.

My other question is, is this a normal occurrence to have the seat scrape like this? Or should I re-mount the seat a bit higher?

Hi Ron, yes it is normal for the bottom of the seat to get scrubbed. Your seat should not be lower than the chassis though. Yes a fiberglass repair kit is in order. It is not hard to do. Best of luck with your repair.

Thanks Mike! I’ll go get some repair kit and also check the mounting height (?) of the seat relative to the chassis.

I’d just raise the seat 1/8-1/4”, and then lower the weight on the seat to compensate for handling change…

Get a couple disc protectors that bolt to the rear casset brackets & mount them on both supides. Not a full proof solution, but they will help prevent the seat & chassis from hitting the deck, off track excursions notwithstanding.