What are your kart names?

I was just interested in seeing if I am the only one that gives a name to my kart, for example I named my kart Jasmine. What’s your guys kart names?

I have pre-named my new kart Maggie the Margay.

I had a chassis we named “the drug kart” once because it was a “special” material and we joked that meant it was being used to smuggle cocaine in the tubing.

Recently I used a OTK that was a couple seasons old and I joked that it was worn out and blamed all my bad races on the fact that it was “so ancient it was turning to dust”, so that was the “dust kart”.

We always named engines, less so the kart itself.

I’ve dubbed mine the F-Bomb, in the event I break stuff.

in the event I break stuff.

I’ve randomly thrown names at them, but nothing that stuck… Wendy wildkart… Eddie Extreme.

Ol’Bessie very old Biesse Kart
-When I drive this kart I always talk nice under my helmet, “You can do it ol’girl, your not out to pasture yet” in a calm reassuring voice.

It’s basically a hacked-up kart / rolling laptop, and I plan to toss it around the tracks. Plus the names a nod to my old Magic Sac Hackintosh. Reference for those who didn’t live through the dark ages of personal computing.

I havent named my kart, but I do feel pretty protective of it (her? Him?). More so than I would of just another expensive object. I’m pretty obsessed with keeping her clean, and taking unnecessary precautions. I think shes a her. who knows

Most of mine are named deragatory names that aren’t to be posted on a forum that may have minors visiting it.

Red October - because we first raced it in October. 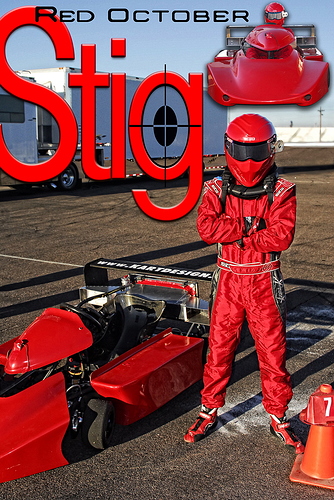 I love this. We should have Karting Kards like baseball.

That is a fierce looking ride, too!

Love it! Love the name and the kart.