What makes you register for a kart race? 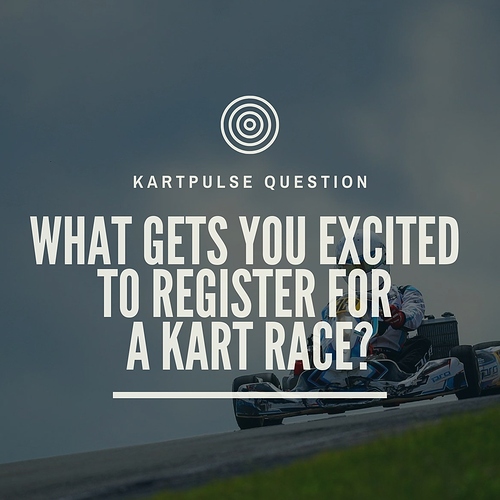 So there is a little bit of back story to this one, and I’m purposely being vague on series names.

My local area has two regional series that run at the same time. For a sport of volunteers, one does a pretty decent job at marketing and the other does not.

I personally don’t think that karting series should be a zero-sum game with one another, where for one series to flourish, the other must die.

However, I’ve seen some pretty obvious marketing and planning misses from some series that just made it clear that no one was going to show up.

I tried to give this series some advice, and basically got blown off being told “We know better.” But their field counts really are not that great, even compared to local club races.

So here has been an ongoing question that I’ve been asking myself.

“What gets you excited to register for a race?”

Is it the schedule? The track location? Knowing who else is pre-registered? Series end prizes?

Let me know in the comments below. What gets you to go? Be polite and don’t throw a specific series under the bus.

I think this really varies from racer to racer, hence why this is a great topic!

For me (personally) I look for three things:

-Is there competition that I want to race against. I.e. new drivers, ones I want to beat, or just a big field
-what is the history of the series…meaning do I know the sanctioning body, know it will he run well, etc.
-excitement and variety in the events. I’m drawn to unique or new things. So a street race or a unique venue, a unique way of running the event, etc. appeals to me. Within reason, I think racers like change in a schedule. There is an element of adventure to this versus running at the same track over and over and over, which is fun too, but can get stale if you want more.

Its a number of reasons for me. I’m also in the same kind of situation in my area. In August the CKNA is coming to my local track and the same weekend anither series is running at another track not to far away. I ran the CKNA last year and had fun but want to try something different and will go run the other smaller series. It’s at a track I haven’t been to since I was a kid and my other teammates have never been so it should be fun for everyone.

perfect trifecta of having money, motivation and a race fundamentally worth doing. Hence why I race on a bi-yearly basis haha

In most cases its fairly simple, is a series we race with going, so far that has added 2-3 new tracks almost every year.
Add a club race for practice prior to a series race if possible, sometimes just because it’s a weekend with no series race.
There are special club races: Summer or fall classic, memorial races, anything that will have a good field.

The last one is kind of special. We have tried to go to the SCCA June sprints and then race the Road America night race that Saturday. There is something very cool about wandering the pits Thursday, Friday and Saturday talking to auto racers and inviting them up to watch at the kart track.