This is odd. I cant figure out why this one video, that is nothing special, somehow has gotten a ridiculous amount of views (relative to normal for me). Something is directing views to me? Anyone have understanding of how this works? As I am not paying anyone for anything (not monetized), I cant understand why there would be traffic directed to this. 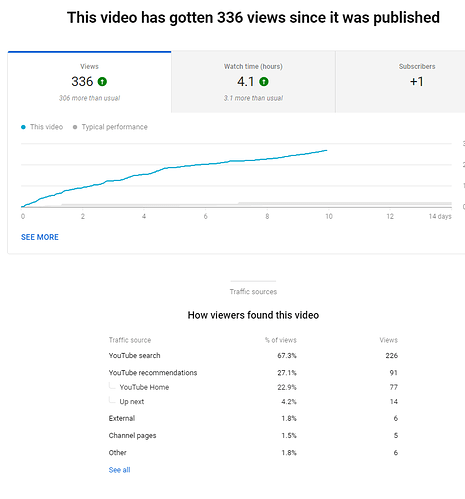 What’s the title? The one video that has “kart crash” on my channel did very well

The usual Laptime @ track name, Wasn’t even a #1 or anything. Sorta no good reason it gets that many views compared to normal.

The bulk came from keyword search for kartkraft and ka100.

The best way to target youtube is to concentrate on what people are searching.

As Kartkraft have just released the KA100 it makes sense a lot of people will be searching that right now. If youtube thinks that your video matches that content it will put it high up on the search rankings and hey presto viewage.

It does say 65% is from search. However, I tagged all the videos I made over the past week in the same way, same words.

Yet, this entirely unexceptional video has 10-30 Times the views compared to normal. 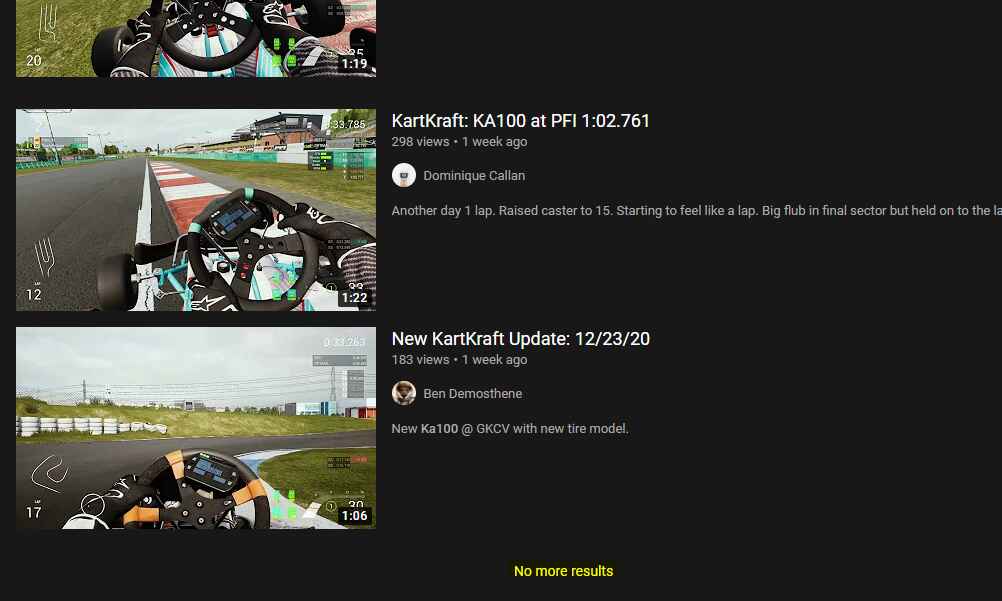 So when you posted it it coincided wiuth an increase in searches for KA100 KartKraft which is a newly used search time.

Once upon a time if I put a video up on youtube and it got less than 50,000 views I’d be thinking what went wrong. Now if I get more than a 100 I am happy. These things ebb and flow. Sometimes you get a video which has the right title at the right time and the market isn’t saturated.

So not weird, it’s just how youtube and search algorithms work.

Ah. I thought that by putting “ka100” etc as a tag word accomplished same thing as putting in title.

Thank you for explanation. 50k views is a lot! That’s impressive.

I used to average around 30-50k per video for a while. But that was when the market wasn’t anywhere near as saturated as it is now. We’re talking over a decade ago now. Crazy really. We got on youtube only a under a year from its first published video. So naturally it worked for us

We were literally the only people making karting videos and stuff like that for a bit. This was all pre-monestiations, subscriber focus, and viewing time focus. Totally different era. If we were getting those views now I could live of it. now with views in the 100s it’s game over. (costs to make good content is prohibitive) I used to think 50,000 views was nothing of note… now? haha totally different ballgame.

I’m no expert on YouTube, but I do my best. Tags only play a small part in YouTube SEO. Titles, the first few lines of the description and even the first few seconds of video are the most important when It comes to getting your videos found.
Now to go practice what I preach.

Youtube will only count a view if the video is viewing for at least 30 seconds, just to add to why starting videos well is important. Really you need to create hyper engaging content to get on top of the game, which personally I could never be bothered to worry about

and the decline in my channel is testament to that

Worth noting Facebook only requires 5 seconds for a view to be counted.

It is interesting how your content seems to do quite well from a viewer perspective. You got a lot of views, quickly.

Thanks Dom. I do ok, my tips and tricks videos do pretty well, but you soon run out of things to make those videos about if you are still learning yourself. As Alan stated above karting is pretty saturated, but also doesn’t really have enough searches for anyone to suddenly explode onto the scene.
Yourself, on the other hand, might be in a good position to capitalize on the VR karting scene as it grows.
Does KartKarft have online multiplayer racing? If it does I think you are in a great position to do highlight videos a-la Super GT or Jimmy Broadbent, but focusing on KartKraft VR racing.

I dont really have any Youtube ambitions and dont monetize anyways. I do like the metrics, tho, and who doesn’t like to see their stuff being watched?

I suspect KK will eventually have robust MP racing. It is my hope that this goes somewhat Iracing in format and “seriousness”. I plan on being as competitive there as possible.

I have shied away from making real content because, well, effort.

I am contemplating doing a series of videos documenting my maiden lo206 season and my inevitable journey to global world lo206 champion. Or something like that.