There’s a post buried somewhere here where someone (I believe with ties to IAME) stated they used ELF because it was the best thing they tested. While I don’t like to let my opinions ride on one individual I felt like this individual had enough credit for me to follow their lead and I’ve switched to ELf exclusively now.

I’ve used Burris castor, redline and Motul synthetic and have never had a failure I’d relate to lubrication so I’m sure they are all fine, but for simplicity sake all I order now is ELF.

Interesting how lots of oils experience this dropout of mix problem. I knew this was a problem for castor, particularly in lower temps. But it seems that even some 100% synthetics have this issue, which was surprising for me. So, thanks for the info, I learned something today.

I still don’t like that manufacturers don’t give detailed info on their oil products. That means us as consumers have to use it and see on our expensive equipment to learn if the product is any good.

I have also been reading about the ELF HTX 976 and 909. Everything I have read indicates it is a good oil.

That means us as consumers have to use it and see on our expensive equipment to learn if the product is any good.

Most racers don’t have to do this though. One can go by the spec oils and or engine manufacturer recommendations too. Failing that, go with what your engine builder recommends.

Of course one can debate the rationale for the oil chosen by these, it’s probably unlikely they would intentionally recommend something that may compromise reliability. It’s in their best interests for their products to hold together.

Which brings me back to my opinion that it’s unlikely to be worth the time to play around with oils unless you’re running an open class. In which case go with a recommendation from a builder for your engine and application.

If you’re your own builder with an engine that’s devoid of any recommendation from a manufacturer, series or fellow competitor…. Then yes, you’re somewhat on your own. But that’s definitely the exception rather than the rule these days.

Most racers don’t have to do this though. One can go by the spec oils and or engine manufacturer recommendations too. Failing that, go with what your engine builder recommends.

Exactly. Some orgs will allow a few types of oils to be used, but for most places, there is a spec oil so playing with the different oils isn’t done so much, unless you are just turning laps on a free practice day and not actually racing. And like James said, most builders will tell you which oils are good or bad if it matters.

Most series are also choosing their spec oil based on recommendations from engine manufacturers or builders too.

I still don’t like that manufacturers don’t give detailed info on their oil products. That means us as consumers have to use it and see on our expensive equipment to learn if the product is any good.

Here is where I get confused too. According to the ELF website on the HTX909…

Apparently ricinus is a form of castor. The 976 doesn’t make that claim as is the case with most synthetics so I assume they are petroleum based. I have had engine builders say some castor is good, which is why the 909 is probably a very good oil.

No, I don’t run Elf because of rules to run only Motul. I can’t believe it is measurably better than Motul but…

I don’t think they regard it as their “full” synthetic. The full synthetic is HTX 976+. Confusing I know, but that’s how they seem to refer to them.

Ricin is the white portion of the castor bean that is smashed to release castor oil. Ricin is poisonous.

I also find it interesting that ELF says that HTX 909 is a synthetic oil, yet no mention of anything other than ricinus. Castor is not a synthetic. I would like know know if HTX 909 is a castor/synthetic blend and if so what is the chemical make up of the synthetic portion…is it ester based or a polyalphaolefin based. Probably will never know.

For the Honda shifter I just used the Honda racing oil, mixed as the PO told me. It worked.

I’d just use whatever the engine manufacturer recommends.

James McMahon is probably gonna pull his hair out, but I promise, James I will quit beating the dead horse soon.

Here is a document created by Red Line Oil on their Kart Oil. It is at least interesting to read. It also has slightly more info than other oil manufacturers, but far less than what they should. IF what they say is true, it makes an argument to go with their product. I haven’t been a Red Line fan in the past, and have never used their products, although some friends have. This is a case where I would like to see this oil, the ELF 976 and 909, and perhaps Maxima 927, along with a few others go head to head in real comparison testing.

At this point I likely will run the 909 when I get there, or maybe Red Line.

I typically don’t run manufacturers recommended oil as they tend to have their interests at heart not the consumers. This is more typical in automotive/motorcycles, not necessarily Karts. Manufacturer recommendations in auto/motorcycle applications typically are substandard to the aftermarket in the area of lubricants/filters, etc. 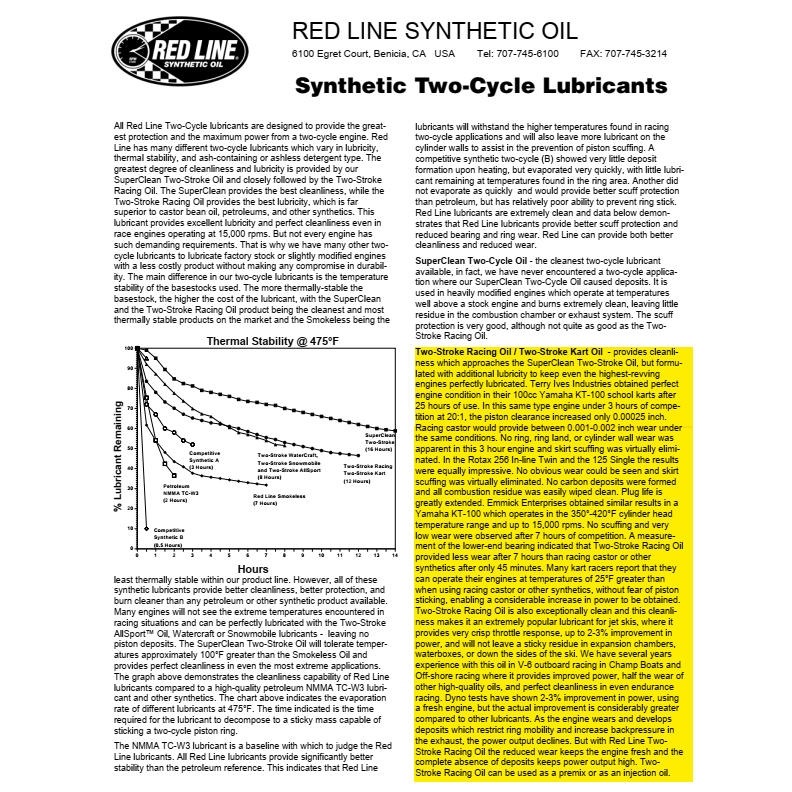 Link to the entire article

Who said I have hair

It’s all good, I just moved the oil discussion to one place. I like geeking out on it personally, I just try to guide newcomers away from going down a rabbit hole unless they REALLY want to.

I have a 250 shifter kart and I like caster/syn blend. I run a special 10% caster to full syn blend. I push my shifter pretty hard and have hand good results. I ran my engine for four seasons before I had to do a tear down. I over speed my 250 and and in my fourth season I seized the rod bearing on my crank. They cylinder was in perfect shape and everything else was in tact. I also run syn blend oil in my gearbox so I have been lucky. Tearing the engine apart and rebuilding it during the race season is stressful and it is expensive to. Most of the time if you run straight caster you will end up gumming up the piston rings and exhaust port. Hope that helps you decide. All the best Mike Stendor

Thanks for the info Mike.

I’m curious, which synthetic do you use?

Hi John, I use Power Mist High Rev Racing Lubricant. It comes from a place in newton nj. The shop is privately owned and the man’s name is Rick. I worked with him and he developed a formula for high rev 2 stroke engines. I believe the label says High Rev Super II 2 cycle engine lubricant. I like it because it has virtually eliminated piston scuff and cylinder wear. Typically a cr 250 maxes out in rpm around 8,500 to 9,000. I run mine up to 11,650 rpm. I also run avation 100LL gas. If you want to go to the website @ www.powermist.com or call 973-383-1061 and ask for Rick and mention Mike the go kart guy with the 250 engine. I normally buy a gallon at a time. That last me quite a while. I am sure he can ship to your house for a small charge. Good luck, all the best Mike

Does anyone have good or bad experiences or thoughts on Dominator oil from Amsoil?

That’s a good question and I’m interested in what the answer will be .

I like Amsoil for other applications, even in 2strokes. But the demands of 2 stroke kart engines are high.

Amsoil is pretty much missing in the karting world except for their 4stroke oil. I don’t know if it is because it’s a verifiable poor choice, or if is because of karting weirdness where the sanctioning body gets to decide your oil for you. The issue that someone other than an owner decides your oil still makes zero sense to me. But that is off topic.