What is an adjustable wheel base? What does it change in the kart?

Essentially it’s the distance between the centerline of the front and rear wheels. 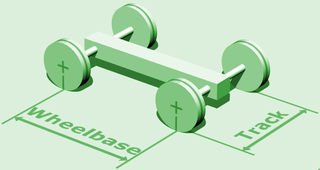 A shorter wheelbase makes a vehicle more responsive, but consequently more “twitchy”.
Longer wheelbase is harder to convince to change direction, but is more stable.

It means the wheelbase is adjustable.

You can move the rear bearings/cassettes into different sets of mounting holes, like when you change rear ride height, but you move them forward or backward instead of up and down. 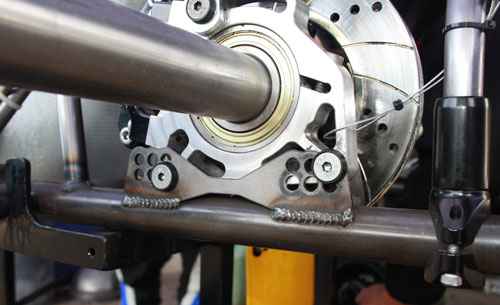 You can see there is a series of horizontal holes to adjust wheelbase.
In this case the wheelbase is at it’s longest, moving the bolts/carrier to the left most holes would make it the shortest.

I like that they have the vertical adjustment too. I never knew how much wheelbase changed but height was always a huge change. Are those carriers really only held on by two bolts though? I’m used to seeing at least 4

Are those carriers really only held on by two bolts though? I’m used to seeing at least 4

Looks like three actually with the third on the top left. It’s an arrow I belive.

A post was merged into an existing topic: Kart republic Information

Here’s a stupid thing I just thought of.

What about adjusting wheelbase for only one side of the kart? Say a track is exclusively left hand turns except for 2 of them. Would shortening the right side wheelbase but not the left allow for better turn in at left hand turns wit out changing how the kart turns right? I must be missing something here.

Aaron,
An interesting thought. Assuming to do that you would move the right rear axle cassette to its forward position and the left to its rear position. Not sure how that would make the kart handle but that would cause a gear alignment problem. Possible other solutions would be to use tires on the right that were a little larger in circumference or have different toe-in/out settings for each side.

Would shortening the right side wheelbase but not the left allow for better turn in at left hand turns wit out changing how the kart turns right? I must be missing something here.

That’s going to make an interesting handling kart. If you think about it… (At least with a rear axle based wheelbase change) you can’t change the wheelbase from one side to the other without putting the rear axle out of square with the chassis. Essentially a permanent rear wheel steering.

I’d experiment with F/L weight split first. Or even offsetting your rear hubs. The other thing to consider is that your axle sprocket is going to be out of square with the motor sprocket

Well the first thing would be the axle would be at an angle relative to the direction of the kart, so it wouldn’t drive straight at all, and when you were trying to drive straight, it would scrub like crazy and you’d probably have to have the steering wheel turned 45 degrees.

As James said, it would be permanent rear wheel steering toward one direction.

If you’re trying to offset something, weight or track widths are a good place to start.

Moving just one side fore and aft in the rear is common in dirt karts. Usually only an 1/8" or less. It does create A little miss alignment in the rear sprocket and so on. Moving your RR forward will tighten A chassis on entry and Back will loosen it on entr. Its not A common GO TO adjustment, just another crutch to do at track in A short time. What I find interesting in oval, just like NASCAR And Indycar of pre 98 season, they will offset the fronts also on just one side. Different theories and ways to accomplish it, but still very cool and thought provoking.
Just an example… http://outcastkarts.wixsite.com/race/outcast-chassis?lightbox=dataItem-is669vkb

I haven’t actually tested the effect of changing wheelbase just one side, but I would assume the negative effect would outweight the positives. I believe a combination of caster, toe and weight adjustment would give you the desired end results.
A lower caster angle allows that corner to rotate easier. So if a track is exclusively left hand turns, run a higher caster on the right side than the left. Then watch the tire wear and adjust toe and camber accordingly.

You can look up the effect of caster adjustments and specifically, CASTER STAGGER. I can break it down a bit more if desired.
disclaimer:*** I have never adjusted my kart’s caster, but I do this on the car all the time.

Here’s a stupid thing I just thought of.

What about adjusting wheelbase for only one side of the kart? Say a track is exclusively left hand turns except for 2 of them. Would shortening the right side wheelbase but not the left allow for better turn in at left hand turns wit out changing how the kart turns right? I must be missing something here.

Well yeah that is completely stupid, unless it works and then it’s pure genius!
I think it works on dirt as bandaid because of the more constant turn mode.
As TJ say offset something else the you can do to one side. Moving one side of the axle is not just wheelbase but toe-in on one side and toe-out on the other. I’d say it would be different if it were independent, but it ain’t and that shows up in the straight even if it were independent. You could do something with the hubs being different lengths as well as different track width distances.

This was definitely a last resort type of idea. I’d never do it in a race without trying it out on a practice day first. I just have a bunch of things I think of and this one seemed too straightforward to work but I couldn’t figure out what was wrong until I posted it on here

I tend to think in real basic terms at times. So my basic thinking would be along the lines of justifying when to have an asymmetrical setup vs how to accomplish it requiring more complex thinking. Specifically on a sprint kart when would you want an asymmetrical setup? Even if a direction is predominant, wouldn’t the turn type have to be an exception as well taking into account following straight and possibly track surface? I can come up with a layout that would be 6 right 90’s and 1 left hairpin 180. Street course?? Seems that would be begging for an asymmetrical setup, assuming all 90s were similar and fast relative to the hairpin being tight.

Expanding on what Mike is saying, I think the question should be what exact issue are you trying to solve? Is the Kart failing to rotate quickly enough, is tire wear not where you want it, etc.
In oval racing, Corners can be longer than straights. So if an offset chassis does in fact improve the turning radius through a long corner then, maybe that trade off (as long as the negatives do not hurt the kart) would be worth it

I think adjusting the “skew” of the axle in the kart is something we’ve seen in oval Karting for a long time. Running stagger, or running different size tires with same circumference is another way to accomplish a similar thing.

I have seen on rare occasion people running hubs at different widths on the rear and front. I think it was a common thing for some racers at a track in Las Vegas at one point, for example.

I also spoke with Dustin Courter about this the other day,he mentioned how many road or street races like the Elkhart Grand Prix or Lancaster are predominantly one direction in turning. So at those events, some people chose to run LTO (left turn only) chassis, and apparently were quite competitive.