Thanks for the detailed post about my session, I really appreciate it!

It is quite bumpy and I make sharper inputs than I think I should/could. Feels like the karts chokes a bit after bump but not sure if it makes difference.

4:28-50 What was laptime for this lap comparatively?

That was kinda between avoiding it and later braking (bad timing I think, but it didn´t seem like time was lost that way).

This is one of those mistakes, where I ask myself “Why would you do that?”. I just ruined a lap there, it was very good until that point, 8-9 was the one of the best lines I drove and too much speed sent me wide. I reckon I lost about .4 - .7s there. That lap was actually 51.142s (.036s slower than previous).

Yes, a lot. I cut the 9 too much, riding the apex, bumping down, going wide, ruins the 11 completely. This would have been a solid lap as well without being overly aggressive.

That whole lap was dead for me after hitting the tyre on the exit of t3. No idea why I did that lol.

There’s not much you can do to remedy it. (tyre overheating)

Yeah, looks like nothing can be done, just drive when you are supposed to, not on 35°C

Thanks for the feedback guys! I never got any kind of review of my driving and I am happy that I am on a good path, as it looks like. I would just like to ask you, what do you think (as in top50 qualification period everyone gets ballast up to 80KG), how will extra 15KG affect the driving, if it will somehow? I have 63-5kg so I assume it will have some kind of effect?

You are welcome. Hopefully helpful!

One tenth of a second per 20 lbs approx? Anyone?

Can you list out the laptimes please? For all laps including in and out? 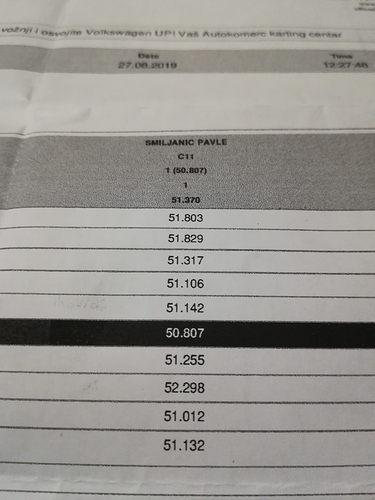 5 posts were split to a new topic: Typical Air Density Changes and Affect on Performance

The three fastest begin at what time in the vid do you think?

We’re really going down a rabbit hole on air density again, so I’m going to portion off the deeper discussion on that.

Generally rental karts will run better with colder air. However it largely depends on how they are jetted relative to the air density. Also, air density changes from highs to lows vary with climate.

Reviewing your video, you’re driving is pretty consistent. Your inputs are pretty large, but that’s because the kart has MASSIVE understeer. It’s pretty bad even for a rental kart.

Some of that understeer/push may be tires, but it also looks like rear is planted. You can also see caster dialled in there either. I think you’ll find that the push and heat is one of the reasons the fronts are getting a bit hot.

With no scope to adjust the kart, you are limited in what you can do to alleviate the kart’s opposition to turning…

Anyway, your driving at the high level is pretty decent, you’re aiming for good lines and using the width of the track to maintain momentum.

Alright, thanks for the very useful information about these tricky condition.

I have adjustable seat, I can move it forward. The thing is, I read about the seating position and I found many sources that say moving the seat backwards help more in terms of overall performance. Could you please just briefly explain what it changes (I know it loads the front or the back, depending where you move the seat) as I heard a lot of different opinions and I am kinda confused now.

Also I am 187cm tall, so I tend to move the seat backwards not only because it is a bit uncomfortable but to keep my arms straight so I don´t make chunky inputs (with my biceps).

The idea with seat forwards is to plant as much weight over the front tires as possible.

As James pointed out, your kart understeers. Loading up front should help.

At 6’ 2" you are pretty tall but nothing crazy. Seat forwards. Pretend your arms are like a t-Rex and be really light on the wheel if possible. It’s like a golf club. No squeezing.

Do more of this.

If I were approaching this like I have been approaching my KK leaderboard push… I’d pick one style for the cutback. Either wide or on apex. Stick with that for now but figure out 8-11. Remove the cutback variable.

Once 8-11 is solid, determine which is best in cutback.

Alright, I will make sure to move the seat forward next time I drive, I really wanna see the difference, it is such a simple twitch that can help a lot, I am sure.

I understand what you mean by choosing a line, I tried to do so that session, it kinda worked but still a lot to work on. As much as I remember, last year, I was doing the tight line (hitting the 3rd apex) when I got those good laps, I remember that much. So I have good feeling about it, I will start to drive like that every time.

OK last thing from me… Yes, hit that third apex for now as well. Go with that. But also choose either running wide of bump at switchback or up on apex. Just remove those variables and get working on the 8-11 puzzle, IMHO. That appears to be crux of this lap.

We’re really going down a rabbit hole on air density again, so I’m going to portion off the deeper discussion on that.
“Portion off”. What does that mean? Does that mean you deleted my post?

It means the topic was split. If you scroll up you’ll see there is a link to the new topic where the split was made…

There’s also some responses from dom on there.

Oh, I watched that video a few days ago. I thought Matts line was fairly okay, then this guy, just killed it, every corner, every time. Looks so simple when you watch him…

Yep. The difference in corner entry is big.
And the host did a nice job too!

@Stacker @Bobby Here’s a fun and very dirty rental race me and my son did yesterday. Since you guys drive rentals, I thought you’d enjoy. I’m sure its much the same in your neck of the woods. Oh and @StrikerClone is in this too but he got one of the stinker karts for the finals so he got stuck in back.

Our results were pretty interesting and just goes to show how much is down to the kart:

Nick’s is a fun watch. He gets in the lead pack and deals with some crazy driving going on around him.

I get a little slower kart but get a nice view of all the fun!

Interesting thing I saw looking at laptimes. So the pack that Nick was in clearly had powerful karts. Let’s assume that Nicks was representative of the potential speed of that pack. His fastest lap in the final was a 32.083. His average laptime was 32.846, however. The other two boys in the pack had similar averages to Nick but about a tenth faster. My fastest laptime was a relatively pokey 32.429 as compared to Nick’s best. But my average laptime was 32.676, a lot better than all of them. Their super inconsistent pace is because of all the contact.

The two kids in the most powerful karts slowed themselves down quite a bit fighting and blocking each other. As a consequence, Nick got by and up into first briefly. And me, in the slower kart, was able to steadily work my way closer and closer.

That is some very interesting race from Nicks point of view. Those two guys in front of him were really dirty, especially the guy in pink-ish colored suit. I also see that your lines differ a lot, I wonder which is actually better, as your karts were too much appart in terms of speed.

Oh, and I love that approval to