Hello all,
About a year ago, I wrote an article which provided a draft chassis setup sheet for karters who wanted to keep better notes on their setup changes..

Since the forums have come around, I wanted to get people’s feedback again, and also see if they had any links to any setup sheets they use. Maybe we could create something for the community to promote more drivers to keep better notes of setup changes, rather than starting from scratch each time they hit the track. 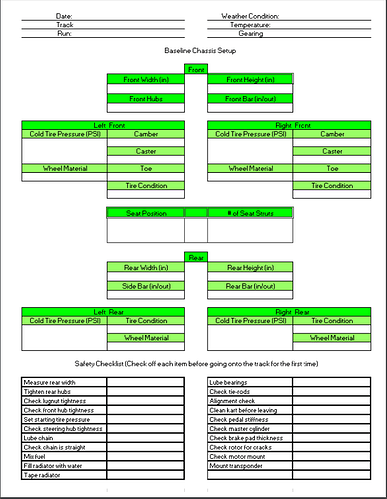 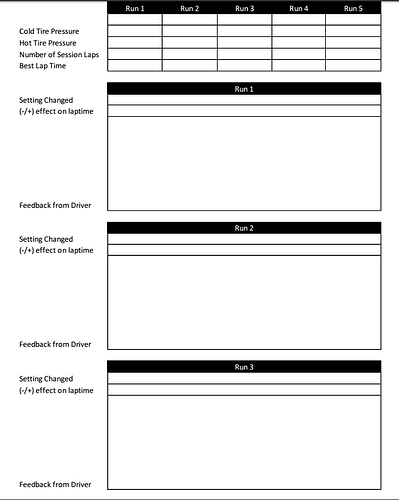 Download draft sheet here. I’d love any feedback you have

7 posts were split to a new topic: How would you use a kart setup app?

I guess we’ll just have to agree to disagree

Anyway I’ve attached my setup sheet from all those years back.

I’m having trouble finding my own setup sheets, so here’s one from http://nogoats.net/

There’s some other handy checklists and so on here: http://nogoats.net/no-goats-setup-sheets/

Every racer should create/use a setup sheet. But one sheet for all would probably be too complicated. My suggestion is to use check boxes as often as possible to save time writing. The biggest thing is to use the setup sheet on every session. Tip: In a hurry, mark down only the things that were changed since the last session on the track. Since we use pencil and paper, at the end of the weekend, our setup sheets are run thru my scanner that produces pdf files. The pdf files serve as a backup in case the log book gets destroyed.

Every racer should create/use a setup sheet. But one sheet for all would probably be too complicated.

I think it can be as simple, or as complicated as you want to make it. We can see that there are lots of commonalities in fields from the sheets so far, with software you can have varying degrees of granularity, depending on the user’s needs.

Tip: In a hurry, mark down only the things that were changed since the last session on the track.

Great tip! This is what I have done on the rare time I have had the discipline to note setups. The challenge with paper is tracking these changes, doing a comparison and having to “work backwards” to get a full picture of your setup at a given point. Software could do a good job of this by establishing a baseline setup that you set and give you a complete picture

The idea of scanning (or even these days taking a photo with your “smart” phone) is a good one. They could go in any number of apps…Evenote, apple notes, dropbox. I like the first two becuase you can add text to the notes to make them searchable.

Tip: In a hurry, mark down only the things that were changed since the last session on the track. Since we use pencil and

I was thinking about changing my setup sheet to line up more towards this. I know if I have too much to write down, I don’t really even use it…#fail

Years ago, I was an SCCA corner worker and we would have to write down each incident long hand. Some one came up with the bright idea to a check box system. Made things much easier and faster. Instead of having to write details of an incident, it was simply check boxes for before, at or after the corner apex, or whether the car continued, needed a tow or a wrecker. Been a fan of using check boxes since.

OK back home this week and have access to my old dropbox… Here’s one of the sheet I used. It’s adapted from a sheet “Fastlane Karting” made I guess. I added some fields that were shifter specific.

…and while I’m in there. Here’s some more…

This is a post session debrief/setup sheet I made a few years ago, made a couple of changes to it just now… 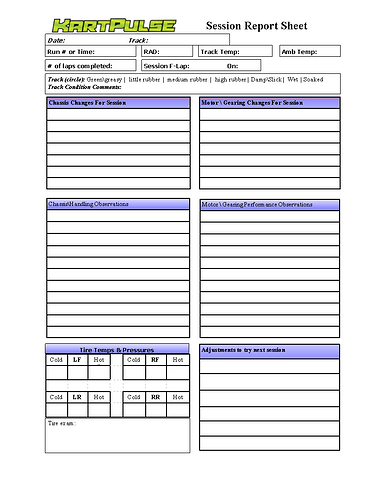 So I like the open areas here, but I wish there was a place to note down the baseline startup, at the beginning of the session.

Something else has gotta go for that to happen though… What would you nix?
Software is very good at these things

I’d reduce the number of rows in each textbox area, so that you some more real estate to play with to put in a quick baseline setup notes area.

I’ll revise it and circle back…

Something I thought of while looking at the sheet that I see many people do; Taking hot temperature after a race is almost useless.

I was at an AiM meeting one time with their rep Roger Caddell (nice guy) and one of the things that he brought up was a data set from a family that was having trouble with the handling of their kart and they couldn’t figure out why. For some reason they had tire temp sensors on their kart, and he noticed through one long, sweeping left turn, the inside rear was getting way too hot. He explained to them how their kart was too stiff and couldn’t lift the inside. They checked the chassis and boom, problem solved: the chassis was tweaked and sat weird if I remember correctly. As he was looking over the data he showed us how much tire temperature changes through even a single turn. By the time that a kart comes back to the pits, it was more dependent on which direction of a turn they had last gone through than the actual setup of the kart.

Pressure is always a basic tuning tool, but as far as a sheet goes I would only use the cold temp setting. If the kart feels good I wouldn’t worry too much about what the final temperature is. Also sorry for totally hijacking your post

Ah, I agree 100% on tire temps, the amount the they fluctuate, by area/zone, by tire is incredible.

In fact that section is meant to only be for cold\hot pressures, I just didn’t modify the header

Ah alright, makes sense then, although I’ve never tried grabbing hot pressures before. My opinion on them is the same as temps though; knowing cold is good, hot is not all that needed. Granted I probably just don’t know what to do with hot pressures and am missing out on good information.

Observing the pressure increase of a given corner, as well as comparing that is different from F/R and L/R can give you some ideas on how the tires are working and how the chassis is balanced.

Broadly speaking, I begin by trying to use starting pressure that doesn’t come in hot more than 2psi above, an do this on all four corners.

FYI. I updated the starting post with a graphic of the sheet that I use, just to make it easier to see.