It’s another one of those “not exactly data driven” things that some people do for peace of mind.

Some of it stems from the use of other “karting” oils that are PAG oil based. Those really should be changed often as they are hydroscopic and generally designed for performance over longevity. Which is fine if you’re running an engine like a clone that you’re willing to tear down often.

The Amsoil 4t is more akin to a synth engine oil and does not need to be changed in that manner.

People still do it for their own reasons, no filter in the engine for example. Or they change it based on color.

But I’ve yet to see a used oil analysis that justifies the need to change oils like the 4T every week end.

One caveat: If you’ve done a weekend in the rain, it’s probably a good idea to change the oil.

One anecdote: I ran the same oil in my 206 for two years and countless (practice/non racing) laps without any apparent ill effects. I wouldn’t recommend it, I’m just incredibly lazy with these things

At the rate some people do them, I’m not so sure

I started doing oil changes every other race, last season. With practice and actual racing, it didn’t seem like the motor was running much more than 40 minutes per event, and the oil was still coming out pretty clean. Had no maintenance issues. Not sure if it effects power, but if it did, it wasn’t a glaring issue.

If you’re using 0W-20 passenger car oil, you can change it when it gets dirty (no oil filter in a 206) or when it’s been diluted by enough gasoline to be able to smell it.

I think it’s time based (try to store your engine with new oil) rather than distance, there are 500-lap LO206 races that take hours and hours and the oil doesn’t fail before the end of the race.

I was not aware this is a thing. How much gain is achieved y using thin oil?

I have in my maintenance notes to “change oil every night” as a suggestion from the club president. Now, I AM new to all this so this may not be the norm at the track. We use 4T in our LO206 engines @~$20CAD/1L jug you can get 2.5 changes per $20. Might be complete overkill going from what others have posted here. Depending on how many laps I’m putting in during Test’n’tune sessions and race days I may just do one change per weekend.

We’re also suggested to store the engine without oil, so upon draining it after race day, it sits empty for the break between race weekends (every other weekend for us) and then re-filled when you begin weekend set-up.

It’s been a while so I could be wrong, but I think David Klaus (Director of Briggs Racing at the time) talked about oil in this interview: 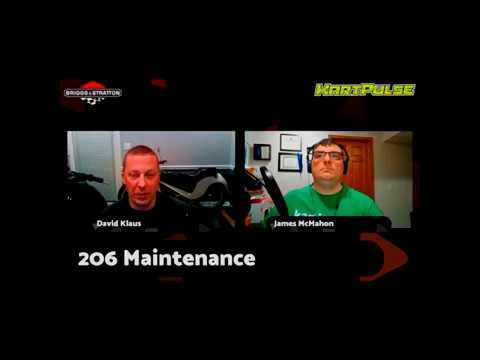 I changed each race day. But I generally had 3-4 full practice days between race days.

It’s good inexpensive insurance to change the oil at the end of the karting day. Best to do it while the oil is still hot. The containment’s will not have time to settle out of the oil and settle to the bottom of the engine. It’s just what I do.

I break in on normal SAE30 on the Dyno, Then switch to my karting oil for Racing. I do frequent oil changes for the first 5-6 races, like every single day of running its getting changed. The oil always looks like I am hosting strippers inside the case with all the glitter… as that reduces I start to reduce oil changes to after the race weekend. I also run 2 magnetic drain plugs on the Dyno/Practice and 1 Magnetic drain plug on race weekends.

I have found this seems to keep the short block happy longer usually a 1-2% leakdown as long as the head decides to stay tight.

As you can tell there is no “perfect” answer as it varies based on a healthy dose of experience vs. superstition.

The guy who got me into this sport (206) changed his oil after about 4 track days. So that is what I do and I’ve not had any issues with my short block. I will admit I do use about 1 ounce of Zinc when mixing my oil. Which is against the rule book technically, but for me its cheap insurance.

And your right the Briggs oil is expensive. I have noticed as of late that alot of people are using other red oils, such as Redline cause you can buy it in bulk. Last CKNA race I attended, I was amazed how many people were going that route.

I’d like to revise my post. I don’t change my oil nearly as often as I had originally posted nor do I leave it empty over race weekends… just over the winter.

We change our 4T oil every 8ish hours of running, which is basically once per race weekend.

We change our 4T oil every 8ish hours of running, which is basically once per race weekend.

I think you have to explain this further. In my case a club event totals about 1 hour of run time, now even if it was a special event how are you getting that much track time?

For comparison, I am redoing the valves on mine every 8-10 hours. That means mine is getting valves done almost as often as yours is getting the oil changed.

Yeah. Maybe 8 hours is the wrong number. I probably get 2 hours of track time on a test day and then another 1 hour on a race day. So I probably change mine way too often… but at $20 a jug and each jug gets 2.5 changes… changing often is better than not changing enough.