I have a dirt oval pal who rented a 35hp animal for a race recently. He said the compression was pretty high or something.

Careful with those hp claims. If there is one thing 4 cycle guys like to lie about its how much hp their engine makes.

…And what gear ratio they are on

To be fair, it was actually a 2 stroke guy who messed with a WF

And what gear ratio they are on 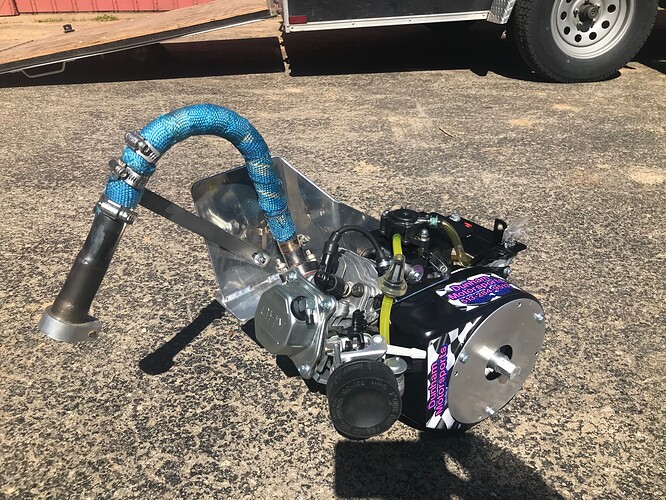 “It’s a Predator motor built to the max. Normally 5hp this one is built to put out close to 30hp. It has so much compression you can’t pull start it. I need to make a starter hole in my side panel.”

Yeah, fairly common class/engine on dirt. Those guys sure like to spend money!

I don’t know the specifics but I’m pretty sure he had nitrous on it. It was a monster, but it blew up a lot as I recall, and the thing was on two-wheels the entire infield. Sticky tires.

And yes it was fast, but those times aren’t exactly representative. Stock Hondas and KZs are for sure gone faster on the classic circuit, but the all-time record only counts if it was run during a club race, and the Stock Honda contingent at the club usually consists of old guys.

I did 36.7 at USPKS in Leopard, and I know we’ve gone mid-low 36s before when conditions were optimal. ICA used to run in the low 35s. ICC I’m sure was into the 34s. Hell, even the HPV Juniors were doing 37s on Dunlops at one point. I remember standing on the fence watching at a WKA race at Dousman and seeing the ICCs do wheelies on the launch into turn 1 when they had stickier tires.

So yeah, Regan’s ride was bad fast, but it was not as close to Stock Honda speed as it seems. Sorry, just nitpicking and reminiscing…

We recently had a dad with a cadet who cracked open his L0206 and put a bunch of billet stuff in there, bigger piston (I think) and a bunch of other mods. Parts alone where in the $1,600 range, and I have no idea what was charged with labor.

End result, it was stupid fast, I mean STUPID fast, for about 12 laps before gawd decided to put a sunroof in the block.

It was impressive for a short time it was alive. Afterward, that dad put his kid back into a stock Lo206 with a green slide.

That cadet was trying to compete against an other higher HP class in his beefed up Lo206. Didn’t end well.

What’s the story with the blue fiberglass looking cloth wrapped around the pipe? Heat absorption or something?

Exhaust header wrap. Might be specified by his rule book for safety purposes (burn prevention). Also used for exhaust tuning by some folks.

Off topic, but are you guys in the US required to run heat wrap on your LO206 pipes?

Yep! From 3" or so from the flange to the lower brace.

FWIW, we run retired 206 motors converted to Animals 11-12 hp. They have different springs and cams and run on methanol. There used to be a number of series and clubs that ran them. They are super popular for road racing. I recommend this a the “next level” of 4 cycle racing, the spec is already there.

Our 2022 season will include road racing with an 20HP open animal.

I had the orange tube wrap, but none lasted very long before burning through (maybe 8 months). So now I’ve moved to traditional header wrap on all my exhausts. Lasts alot longer

One on my daughters my cadet kart, and I just did the other one for the new motor going on her sisters kart she is getting for her B-Day in May. 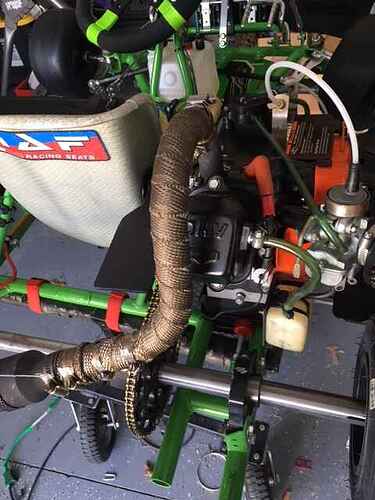 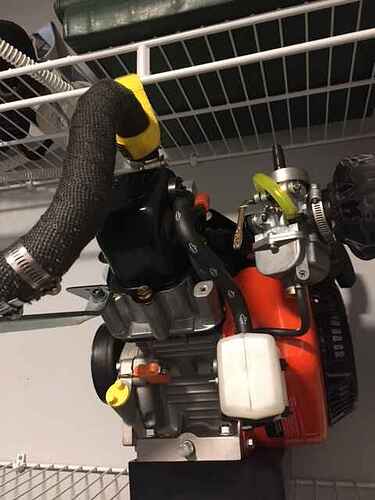 Get some vents in those catch cans. You got me worried. I dont want to see you on the forums asking why its not running right.

Caps have vent holes in them.

Did you overlap the wrap a bit. If so is it better to overlap or what just did mine and didn’t overlap it but I can always redo it if there’s an advantage besides not branding myself.

1/4 inch overlap is all I did, per the instructions on the case of wrap I used. Just make sure it extends down to the lower clamp bracket per the Briggs rulebook.