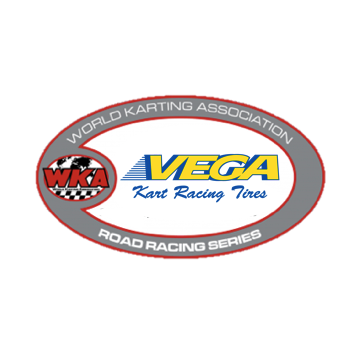 WKA along with KART hosted their final race of the season at the National Corvette Motorsports Park in Bowling Green, Kentucky. This would be the 2nd time that WKA and KART had ever raced at this particular track and the 3rd time that these 2 organizations rallied together to co-host an event. With the temperature hitting below freezing and rain on Thursday and Friday, the Grands Nationals were at a standstill. Many weren’t even sure if they would make it on the track for practice day, but by midafternoon things started to look up. The track had finally dried up enough and the powers at be gave the green light for practice to begin. As chilling wind and temperatures ripped thru the pits many brave karters layered up and hit the track to make sure that they were ready for the next 2 days of racing. Many were competing for the infamous Grand National Eagle trophy with only a few points separating 1st, 2nd, 3rd place. Who would take home the Eagle?

This year the CIK LO206 class has not disappointed when it came to good ole fashion racing. Two very familiar karters have dominated this class the last 2 races. Chase Pflughaupt and Lindsey Read have become formidable opponents in this particular class, battling it out in every turn of the track. On Saturday both Chase and Lindsey started up front and broke away from the pack with only 1 other karter on their tails. They continued swapped positions numerous times throughout the race, Lindsey was leading when they hit the last turn and headed down the straightaway. With the white flag waving, Chase knew he was going to have to wait to make his move until the last corner. Going into turn 14 Chase grabbed the inside line, but Lindsey had a plan of her own and decided to cross under Chase, which started a drag race to the finish. Lindsey Read ended up taking the checkered flag with only .022 seconds between her and Chase, while Stephen Gibson brought home 3rd place. 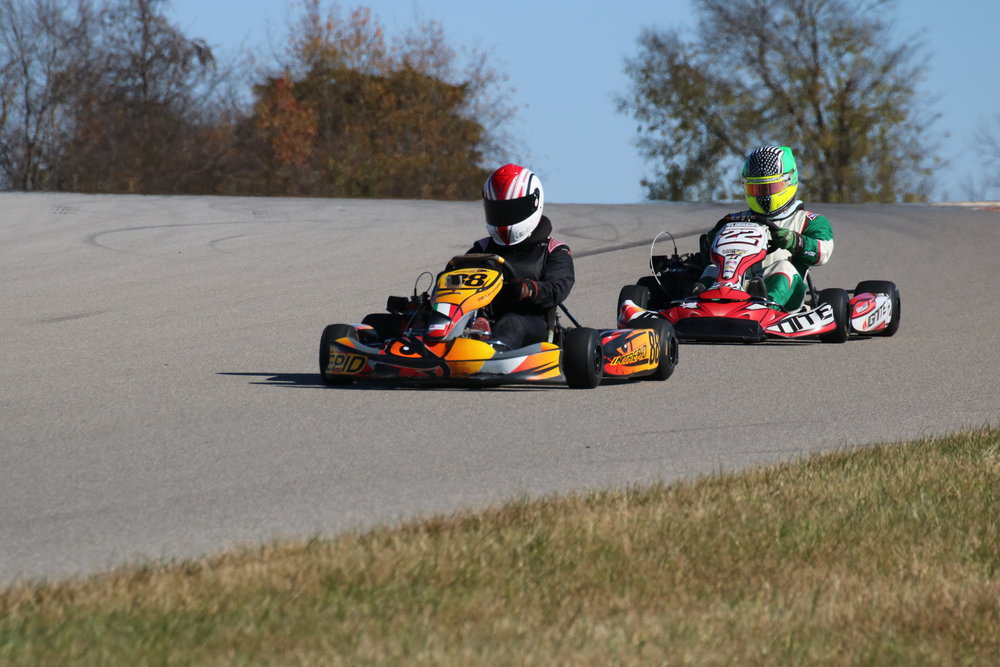 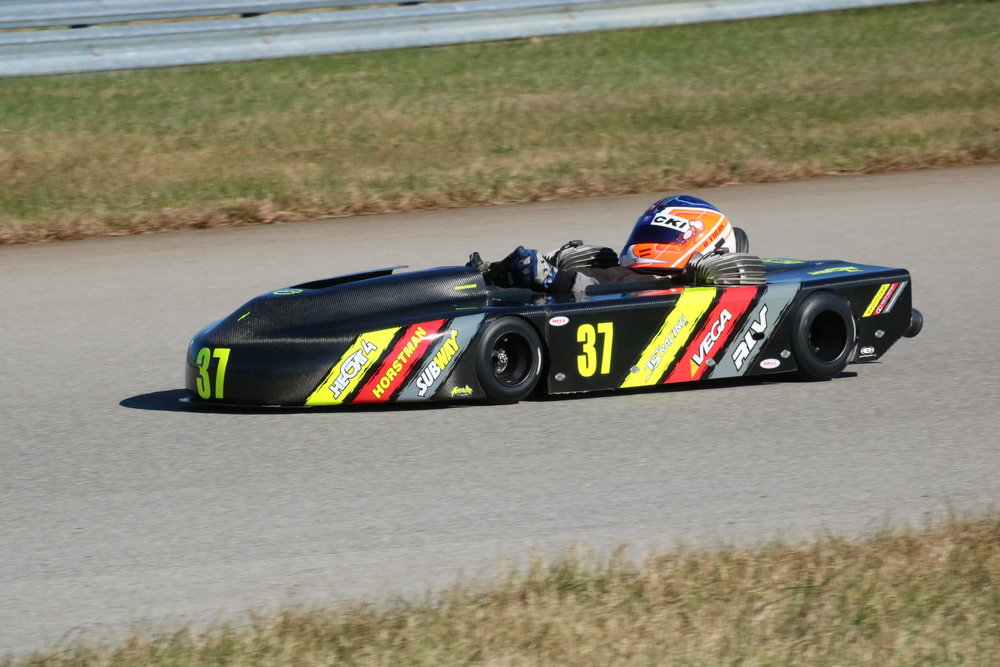 Once again, Sunday’s CIK LO206 class had spectators on the edge of their seat wondering who was going to take home the 1st place trophy. Chase and Lindsey once more battled back and forth the entire race with three other karters trying to catch them. With three laps to go, two of those karts drafted off each other to pass Chase and Lindsey. Unfortunately going into turn 14 they literally pushed each other off the track, eliminating them from the race. The now third place kart was close behind until the finish, but Chase was able to grab his 1st Grand National win while Lindsey Read took 2nd and Craig McNeese secured 3rd place. According to Chase it was a pretty solid way to the end their second year in karting, going 1-1-2-1 in all of the WKA/KART joint races in which they ran the CIK LO206 class.

Race 3 on Saturday brought in a bunch of heavy hitters running a couple different classes. The B Stock class was a family affair with the Harper clan making up the majority of the entries. According to Robby Harper this was one of the only times that all his boys were racing together with him. Unfortunately, those numbers could not help secure a 1st place finish. As soon as the green flag dropped for the B Stock class Rick Fulks took the lead and never looked back. Rick stayed in the lead the entire race with a 60 second lead over 2nd place. Jim Farr Jr. brought home the 2nd place finish and Robby Harper rounded out the top 3. The Yamaha Senior class also did not disappoint with 12 karters competing for the National trophy. Once the race started the lead pack consisted of Randy Fulks, Scott Grenier, Brian Ellis, and Brad Zoeller. Regrettably they were unable to handle the power of RRR racing as Randy Fulks pulled away from the group, which led him to a 1st place finish over Scott Grenier. LAD Specialties was well represented with Scott Grenier’s 2nd place finish as well as Brian Ellis bringing in 3rd. Once again, the Fulks name did not disappoint at the Grand Nationals as Randy Fulks also brought home a 1st place finish in Sunday’s Yamaha Senior race with Scott Grenier taking 2nd and Rex Pierce 3rd. 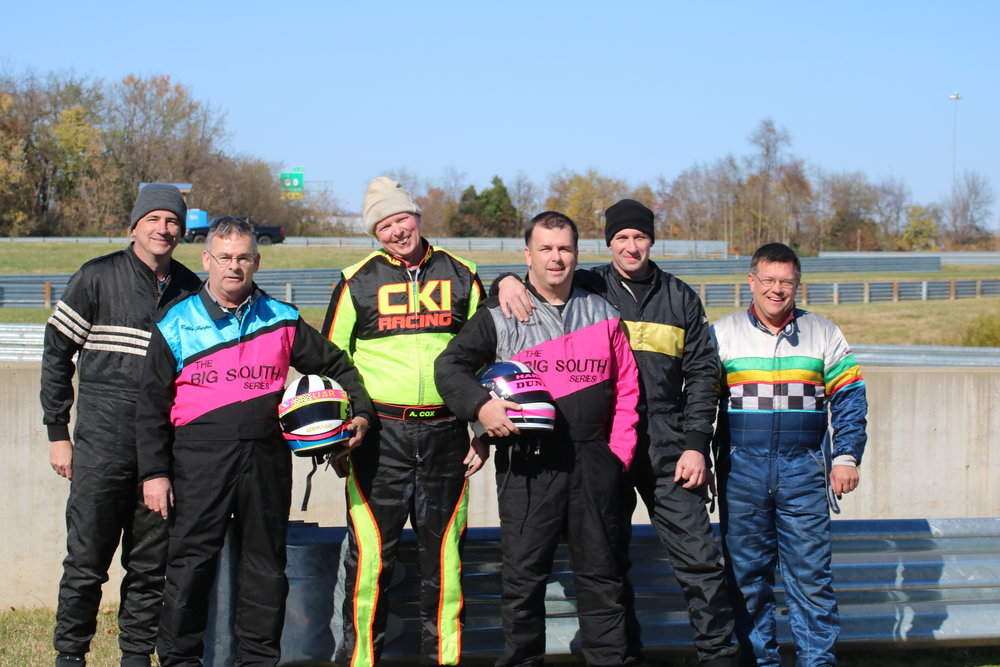 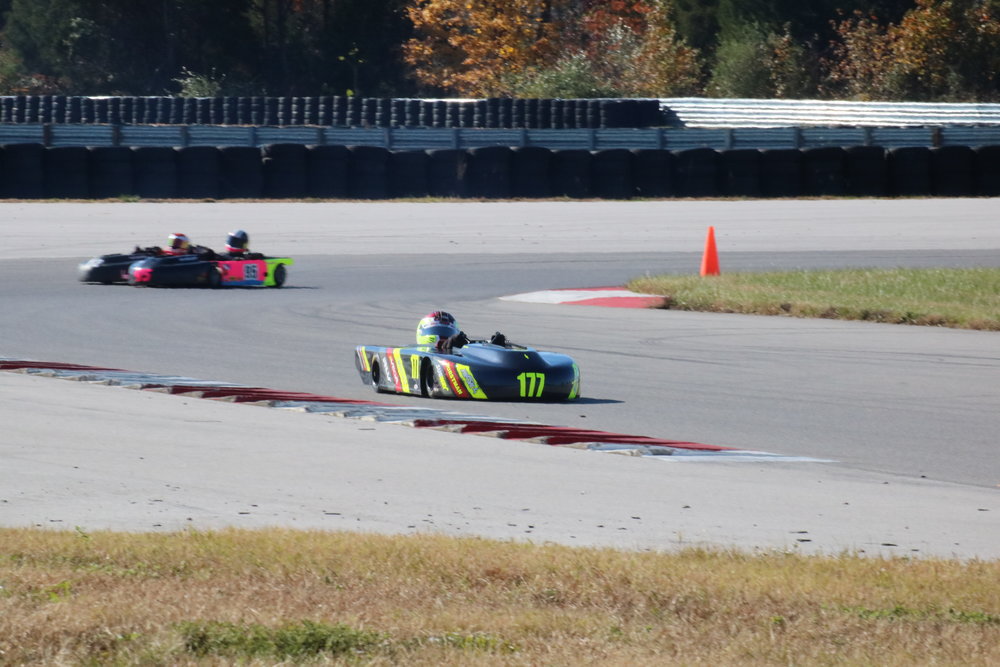 The Stock Honda class in race 4 also brought out an impressive 13 karters to the grid. Starting third, Steven Rougeou had taken the lead by the 1st corner unfortunately somewhere on the track an incident had occurred, and the red flag came out. The karters were once again lined up for a restart once the track had been cleared. This time Steven wasn’t by himself going into the first turn, Alex Watzke and Mark Nagy were right on his tail. Mark Nagy took the lead and set the pace of the race. Alex seemed to have an issue and fell back halfway through the race. Steven and Mark continued to race neck and neck for the entire race with Mark taking the checkered flag over Steven by 0.413 seconds. However, on Sunday Steven was able to secure a 1st place finish taking home a Grand National Eagle to add to his collection. Steven’s DR M99 was consistent through the entire race. His SRS engine was strong utilizing the Mezzo heat exchanger. “I’m glad to have been consistently fast this year and running up front with the fastest guys in the nation. It solidified another national championship in stock Honda.” Chad Donner took home 2nd place, while Alex Watzke came in 3rd. 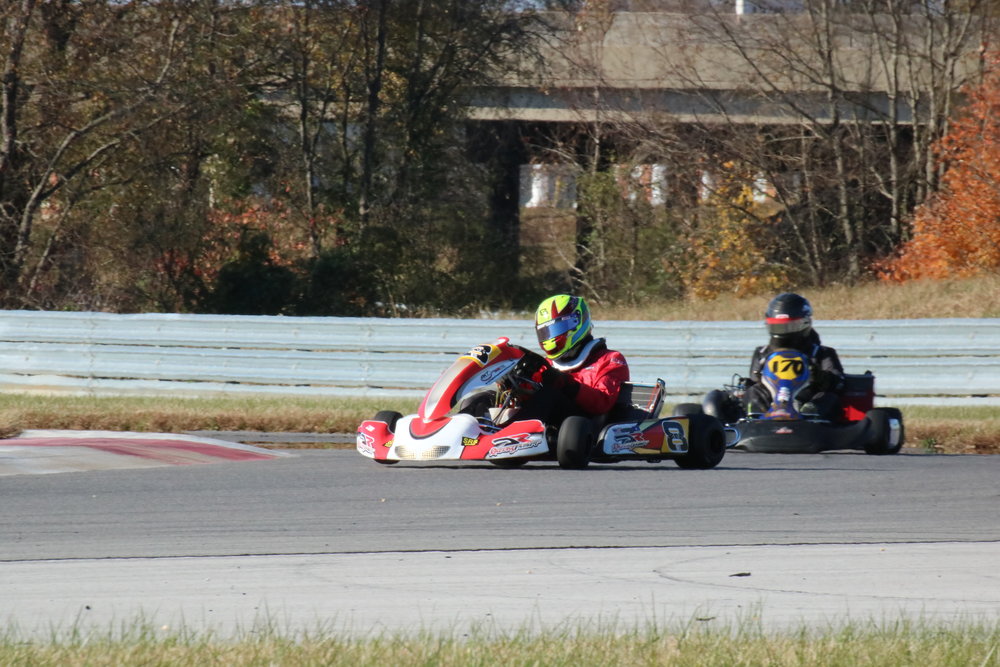 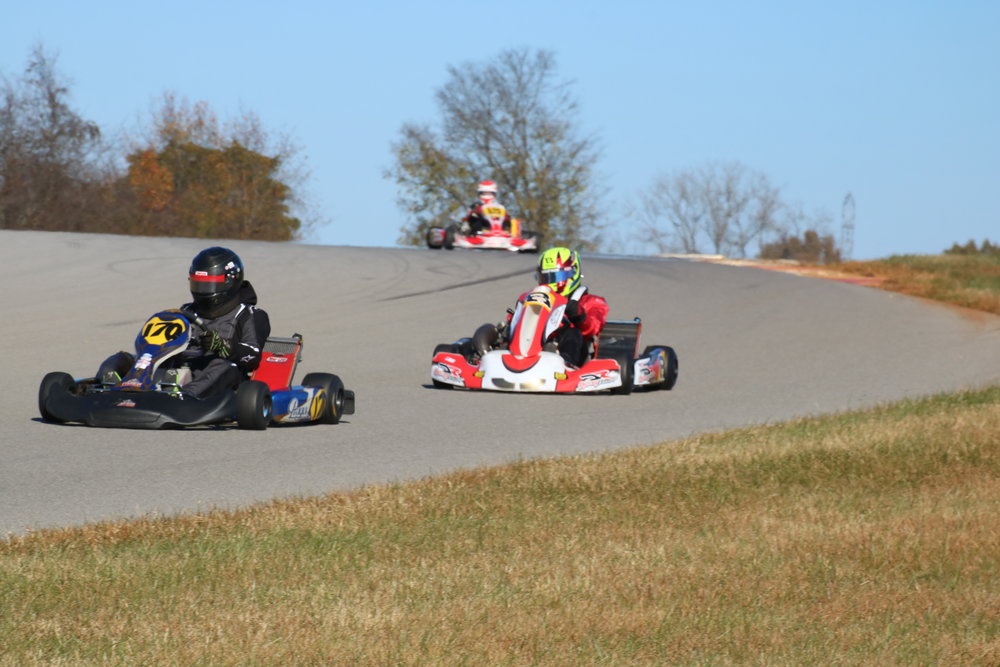 Yamaha Sportsman Medium was also another class that brought out 11 racers to Kentucky to vie for the opportunity to take home an Eagle. Once the green flag was waved Randy Fulks once again took the lead and never let off the gas. Coming off the 1st lap Rusty Benson was in back in second place followed by Jeramie Weeden, Lamar Hillard, Gianni Scavuzzo, Justin Greene and Amanda Holewski. As the racers hit the halfway mark Rusty Benson unfortunately fell out of the race and DNW while Lamar Hillard took over 2nd. For the rest of the race Lamar, Jeramie and Amanda battled which ultimately led to Lamar Hillard hanging on to 2nd place while Jeramie Weeden took 3rd and Amanda Holewski taking 4th. 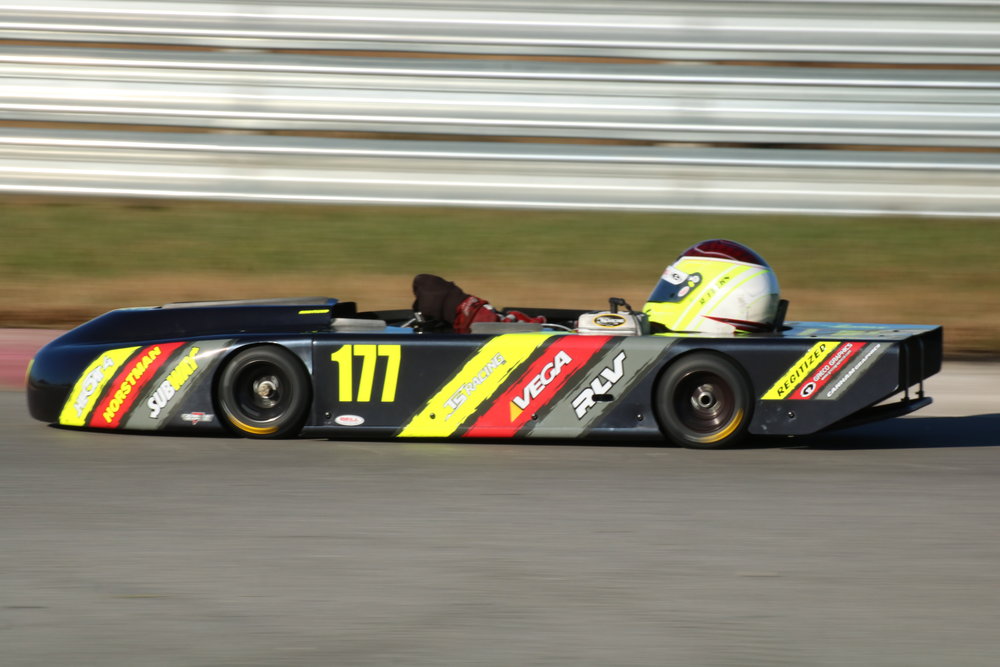 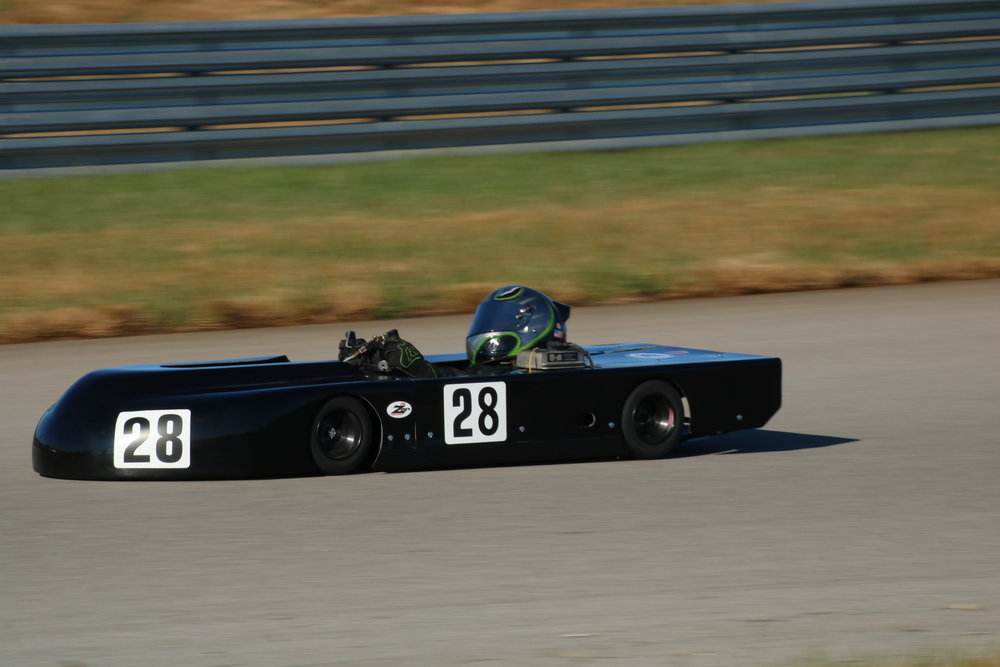 Congratulations to all the winners at the Grand Nationals and thank you for being a part of the WKA/KART race at NCM!!! Looking forward to seeing everyone in Daytona for the start of the 2019 Road Race season.

Thanks for writing this up, there was so much going that weekend it was hard to follow everything.
This is my write up of the weekend and our trials and tribulations with the cold weather and busted motors. 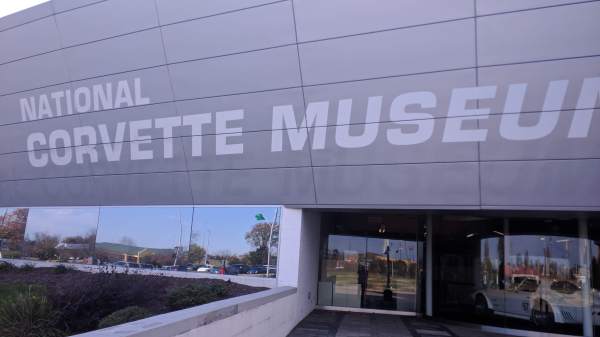 The weekend of November 9th was the final race of the 2018 Season for the team. The WKA/KART-MARRS Road Racing Grand Nationals was held at the National Corvette Museum Motorsports Park in…