Check this out. Prd has a 100cc piston port air cooled engine with everything you need for $780. Seems like a better yamaha package and super cheap. I wonder what the parity is like between engines? You can also order a direct drive version for a bit cheaper or an electric start version for $1000. Seems like a steal.

Note pricing was obtained from an Australian retailer after converting to US dollars. 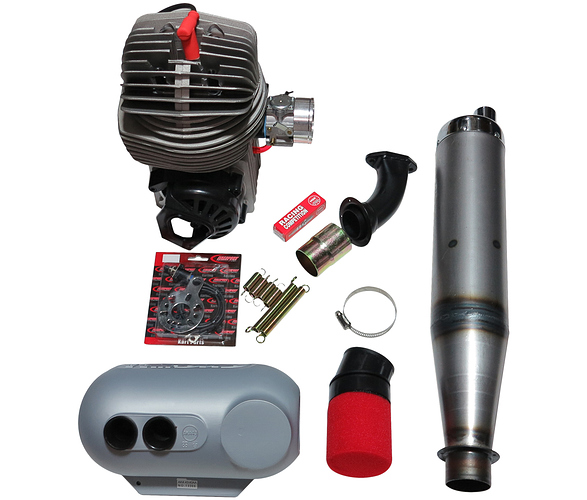 As engines go… I’m sure it’s decent and reliable. As a class, I have no idea where this will actually fit in the market.

Sure it’s cheaper than the other aircooled 100cc TaG reeds, but I’m not sure that’s enough. The marketing and promotion efforts for those is pretty stout.

I feel if there was genuine market interest in a piston port engine we’d see a resurgence of HPV/KPV before anything else.

But I’ve been wrong before.

I had a PRD Fireball once. Worst engine I’ve ever owned. $780 is an incredible price considering an equivalent TKM BT82 is $1600, but I’d stay clear.

What made it the worst engine you’ve ever owned? I’ve found them to be fine as long as you don’t expect it to be as fast at the other 125cc engines.

can you elaborate? I have one and have had some issues but it was user error (bad carb and unvented fuel tank.) The only real issue i had was the starter button going bad causing the starter to not work occasionally.
Did you have an early one? I heard the later ones were better.

Do you have a link for where you found this package?

build quality was awful. Clutch failed almost immediately. Dog dog dog slow was the main killer for me (maybe I just got a real bad one). Might have been an early version, but I learnt my lesson with that motor. I was trying to push TaG in the UK (to break the Rotax monopoly) at the time (2005ish?). I passed on getting a Leopard because I thought I could save some money.

Sounds like an old one. The new one has an iame style clutch. I have about 2 hours in mine. Im not sure what the speed is on the motor since i have not tested it competitively. I was the fastest locally on a test and tune event but i think that was more driver mod than anything.

One of the biggest complaints about most of the old piston port 100cc motors is the Walbro carb they used…which is the same thing used here.

So IDK if “better Yamaha” is all that accurate of a claim.

The biggest gripe i always would hear would be the annoying clutches. Since this has a low stall it pretty much fixes that.

high stall clutches are finicky and maintenance intensive but they are a performance advantage.

I guess for a practice motor this makes some sense but to try to race it and mix them in with other piston port 100cc motors with their high stall clutches and you’ll get killed off of slow corners.

As a spec motor package it would be nice, no one wants to mess with clutches any more.

if I had to make a choice between High stall clutches and those Walbro carbs as to what’s most annoying…Walbro wins the crap prize.

As to the KPV motor I like the idea but if nobody has a class for it then it’s of little value here. That’ll be the biggest hurdle to racing them.

If you just want a cheap practice motor it’s a better option than a Yamaha I’ll give you that.

I used to go to Jim Hall in Oxnard. They ran KPV and that’s what I learned to kart on. I have a soft spot for that engine.
Limited to like 13.5-14 I think they were getting 80 hrs on them.

@Bimodal_Rocket they at one time put a HPV 4 pipe on them at 355 lb for the junior 2 category…those engines hauled!

I ran a few fun races with an HPV-4 on MG Yellows with no lead on the kart, probably about 270 lbs overall at the time. It was bananas fast. We were passing TaG and shifter guys in the infield. Granted they were old farts at the club, but still.