So, I’ve got a little bit of a predicament here. Due to me going to college soon, my budget has probably dropped to around 1500 for the year. I’m wondering how I should split that up. Basically, I can do 3-4 club races in WF, or 1 regional race and some practice days. It would probably be in ka100

Any ideas or suggestions?

If it’s just to have fun karting, I would do whatever allows you to drive the most.

If you’re looking to try your hand at something a bit higher level, I’d try and get out to a regional event at least once.

I really want to get better, and I feel like the regional event would benefit me the most, but I also just want to race a bunch. Ugggggh. What regional events in the northeast are there?

I was going to say F-Series but looks like they don’t have a 100cc class. I’m not sure what else is available for true regional-level programs in the northeast. You’re kind of in a deadzone. 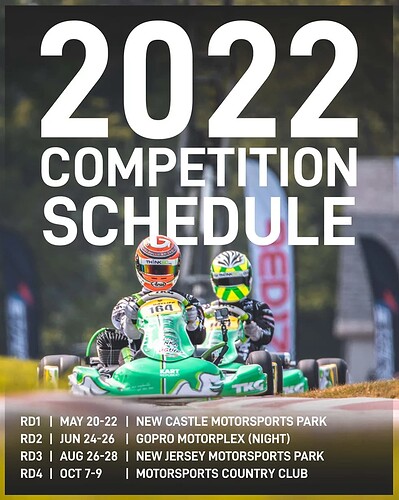 While I understand the lure of doing a regional race, if my funds were that limited, I would 100% focus on maximizing track time per dollar. Run your WF at the club level as many times as you can.

I really want to get better

Better at what, specifically?

The furthest east that Route 66 goes is New Castle and Elias is in New Hampshire.

Wouldn’t be a bad choice. It’s growing and it’s not really a national series so it might be a good step up. There are some good drivers there.

Better at what, specifically?

Good question. I agree, you should pretty specifically define your goals and then that might help you make a plan on what will help you achieve those goals.

Like Derek noted, you could just race club stuff as often as possible to maximize seat time. But if you’re maximizing seat time on tracks you know against club level competition, maybe you’re not being challenged enough to improve, and you’ll race to the level you’re competing at rather than rise above.

Not saying either way is right or wrong, just need to narrow the goals a bit more.

You’re lucky you can race and go to college, I had to quit for a couple of years. A good goal for club racing is to win the championship.

If you run TaG 100cc, I think your tire bill could be the largest potion of the budget, as you’ll have to buy new every race and likely you’ll need another set for pre race testing to get your qualifying set up.

I’ve heard that LO 206 tires can be run for 2 or 3 races and still win. Plus you can practice on tires that behave the same as qualifying without having to but buy new. Maybe some could chime in on this.

Another benefit of running less expensive races more frequently is that it will still afford you flexibility if “life happens”. If you’re on a tight budget and the one bigger race doesn’t go according to plan then it could put you in a tough position financially.

Karting…?
I want to get faster lap times, and get better at actually racing others. I’ve continued to improve my racing skills, but I’m still not great at it

I never particularly pushed myself at the club level. I was top 5 at one of the tracks, and midfield at the other. While I got better at “racing” my pace didn’t improve too much. Maybe the lack of competitive environment mellowed me out a bit?

How big are the fields? Where are you finishing? How far off of the fastest laps are you? How is your consistency? Are you confident in the kart? Are you racing at circuits other than your home track? What are the biggest factors holding you back?

I went last season on 1 set of tires… well, 3 races were in the rain, but the other 6 were on one set

I can thank my parents for that. They’ve funded 3/4 of my karting, but they aren’t this year due to college. I do work 30 hours a week in the summer, and 18 during school weeks, so I can fund some racing

Right… my worst damage so far in 3 years has been a bent axle😬 a bent chassis would uhhhh ruin my year.

Wf fields are 18-25
Probably the most competitive field in the club
@Racer_Rick12 right?
I finished 10th this year, but I missed a race, got DQd for not going over the scales when I got wrecked out in another, and got spun out in another final. I was also on the worst rain tires for the rain races.
Pace was about .3 off first at best, and 1 off at the very worst. .5 on average I’d say.
One track I was easily top 5, other track I was all over the place.
2 tracks, 4 different configurations last year.
I got much more confident in the end, making passes by braking late for the first time.
I am not too consistent results wise, and I improve the entire race day most of the time. I suck at qualifying, I suck at defending, I tend to start the finals further back than my pace would suggest, and make up places from there. Not enough seat time on race days. 5 min practice, 5 minute qualifying, 10 lap pre, 12-15 final

It seems to me that there’s room for you to grow in club. It might not be what you want though, some of this might just be wanting a change of pace.

I feel if you stay in one place too long you risk plateau’ing, so my vote is to try and do a regional or bigger event. Race against different people on a different track. You also tend to get more track time at these bigger events compared to a club race.