Adjusting Jet Sizes According to Changes in Air Density

Here’s a spreadsheet showing the area difference between a .036" and a .037 jet. It also shows the percentage increase in the area if the hole diameter is increased .0002" in the chart the bottom. Now Longacre, on their website, says a 1 point increase/decrease in air density needs a 1% increase/decrease in jet area. If I was racing that motor, I would be going for every advantage I could, seeing as how the competition is so close. Now seeing as how I don’t race the L0206, never have, I may not know what I’m talking about. It could happen!
Tuning is tough! (Al Nunley) 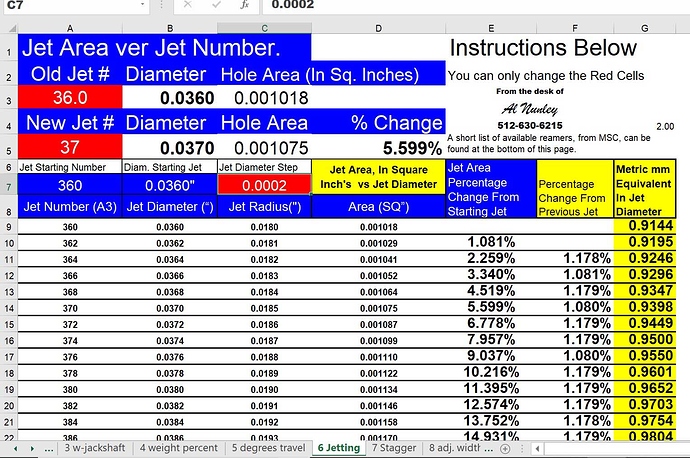 In any case, re the sheet in isolation a 1% increase in air would require 1% of extra fuel (flow is not directly proportional to area, but I digress) to maintain the same carburation… so that’s a datapoint to consider if one wants to go that way.

This got me to thinking, so, off to the web browser. I found some measurements in flow compared to orifice size. Unfortunately they started off at 1/64 than doubled to 1/32, again to 1/16, then 1/8, then 1/4. A fter that I only used the sizes where they doubled it, i.e. 1/2 and 1 inch
not surprisingly, each increment was four times the area of the preceding increment. 4.0. The statistics showed that the flow rate increased at, very near, 4.0. There was approximately a .1+/- difference in some cases, but not all. I’ve been involved with flow testing of jets when I worked at Truax engineering, and even though the jets were manufactured on a Swiss CNC lathe, there were variances in flow. I don’t remember the name, but one carburetor manufacturer in Europe flow tests every single jet and marks them accordingly. Although I can’t predict precisely what the flow would be through any size jet, I doubt anyone can, my calculations in the spreadsheet are correct. My search for good flow information suggests that; size and flow are very closely related. Then again, I could be totally full of…

http://www.longacreracing.com/instructions.aspx?item=8091&article=Air%20Density%20Wheel%20Guide%20Jetting%20Tool
This is just one article on Longacre’s website. It has to do with their air density gauge. They mention the EGT. They mention humidity, their gauge does not measure this but, it has little affect on engine performance.

Just out of curiosity, why was this move to the two-stroke section, it’s useful, mostly, for the four stroke people. I’ve never seen a two-stroke that has fixed jets other than the shifters.

Al,
So what you are showing, are there (presumably) diminishing returns and/or do rulesets prevent adjusting jet diameter?

Also, is it even possible for a machine to increase the diameter of a hole by .0002". Is that level of precision possible?

Just out of curiosity, why was this move to the two-stroke section, it’s useful, mostly, for the four stroke people. I’ve never seen a two-stroke that has fixed jets other than the shifters.

Fair question. It does apply to most engines… but

For most four strokes in karting, adjusting jetting is not nearly as critical for performance when compared with two strokes… also in the a lot of these cases the jet, tube etc is fixed in regulations

TJ made a good point too… The Rotax Max uses this jetting type and there’s over 100,000 of those sold around the world. I don’t think any other kart engine has come close to that.

So there’s more value to be had by putting it under two stroke.

Interesting explanation for putting this thread in the two-stroke section. It brings some thoughts to mind; what is significant for a change in performance? For lap times? Would a 1% increase be of any significance? Would a 2% increase be of any significance? At what percentage would the increase become significant? With a 10 hp clone, 1% is only .1 hp. I wonder, could that make a significant difference? How about .5 hp? I don’t have any numbers, for that matter any idea, how much difference a 1% change in jetting would make in horsepower, but I wouldn’t want to leave any on the table. When they tell you that changing gear sets with the same ratio makes a difference in performance, and I’m not saying it does or it doesn’t, why would you want to risk having less horsepower, however small that risk is?

That’s where it’s down to the individual to decide what is the best use of their time between engine, driver and chassis performance.

I really have no idea, but I wonder, what’s the ratio of Briggs/clone to L0206 in karting today? Also, the ratio of fixed jet engines/adjustable carburetor engines? I wouldn’t want this to be thought of as a contentious continuation of my previous post, just gathering information.

I really have no idea, but I wonder, what’s the ratio of Briggs/clone to L0206 in karting today?

I can’t speak too much for clone, although practically every dirt racing class except UAS runs one. Say 10,000? I really don’t know other than there being a LOT of dirt racers out there.

For 206 there’s 2700 racers in the US listed on the Briggs Weekly Racing Series program. One would expect the number of engines in circulation to be higher of course as it’s been around for about a decade and is also available outside the US.

However 206 of course runs a spec jet, needle, nozzle/tube etc. Some but not all clones do also.
So that leaves “adjustable” jet carbs at Rotax Max (100,000+) , the gamut of shifters, certain 125cc TaG motors and superkarts.