On a scale of 1-10, how would you rate your mechanical ability, or willingness to wrench on things?

Talk a little about your racing experience so far.

I raced dirt oval karts in high school. Also built and raced 70’s mopeds for a bit in my 20s.

What’s the main thing you need help with to get you started.

I’m looking to get started up again, this time with karting on sprint tracks. My closest track is Lafayette Motorsports park. It looks like they only run 2 strokes in the adult classes. I was thinking about starting in the 100c class (KA100 or VLR).

I’ve been searching for used karts and I’m mostly seeing Tag 125cc karts that look pretty beat and a few LO206 karts within reasonable driving distance. I did find a kart that is close to my parents house, but the seller is pretty uninformed. He says that he is selling it for his father in-law. The kart was advertised as having a never raced VLR on it. He told me it is a Zinardi chassis but he doesn’t know the age. Can anybody give me a ballpark age from the picture? Obviously, it is hard to tell condition from the single picture I have, but if it isn’t ancient I may take a drive to see it. 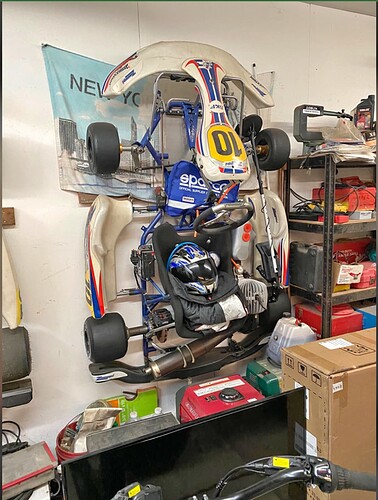 Looks pretty tidy to me and we’ll kept

Hard to tell without seeing the chassis plate on the rail behind the seat, but those graphics and Zanardi’s popularity in the early 2010s suggest to me it’s probably from that era. Could be a decent kart for getting back into it as long as it’s well-kept.

It being 10+ years old would need to be priced accordingly. What’s something around this era worth in good working condition?

I am intrigued by your moped racing. As a kid in Paris, mopeds were the favorite method of transportation for the “greaser” adolescents. They were, of course, very fast. I was not aware that they were raced, too. 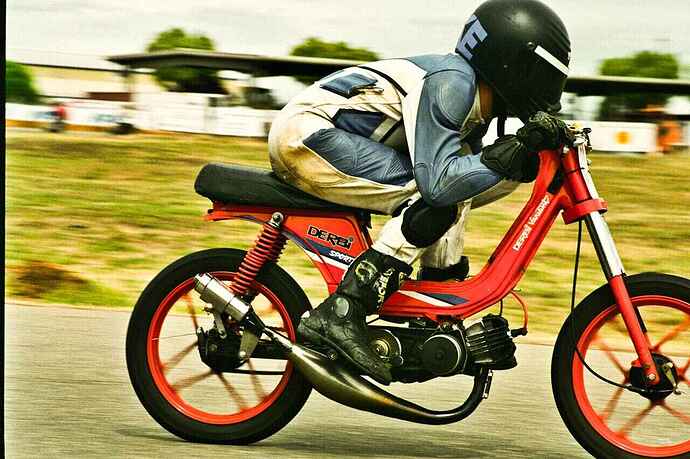 From what I can tell in that photo, that chassis is probably 2010-2012 era. Those were great karts, but I would hope to get a deal on it with how old it is.

If you don’t go with this particular kart. Moving forward be sure if your looking at a “206 karts” just make sure it has a 3rd axle barring cassette, as many of the newer stuff does not. Alot of 4 stroke (206 specific) karts are not equipped with the 3rd barring cassette, and therefore can’t be used in 2 stroke.

My kart is a good example. Its a 2 stroke chassis mated to an 206. So it can be used in either if I pop my 3rd cassette back in. One of the reasons I choose it, cause it gave me the flexibility to run either. 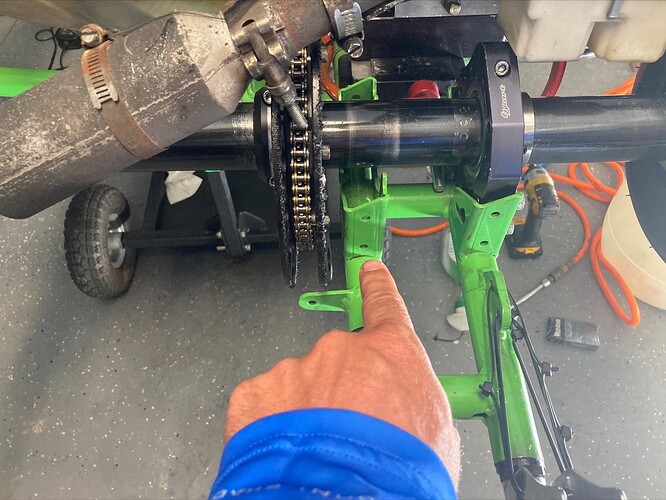 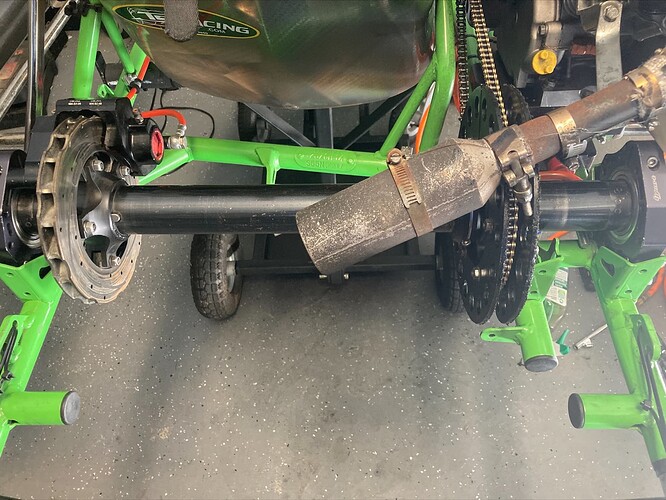 You can use a kart without a third bearing in 100cc stuff. You could even use it in 125cc stuff if you wanted, but if it doesn’t have a third bearing, it probably is designed for lower hp.

The CompKart 4-stroke kart they built didn’t have a third bearing and it worked great in KA.

I can attest to the Compkart 4R being competitive as the leader in our KA points has one and is tough to beat.

I am in Syracuse as well and race at Lafayette in KA100. I will gladly help you out. I will send you a private message too.

As for the Zanardi Kart it looks very similar to CRG, can anyone verify if that is who made those karts?

Zanardi was made by CRG, that was pretty much Dino’s program for a long time as far as I understand.

The SWS track near to my daughter in Carcassonne France regularly holds scooter (moped) races.

Endurance race, no less. How about Team Baguette join forces with Team Khubz in 2049 after much training? 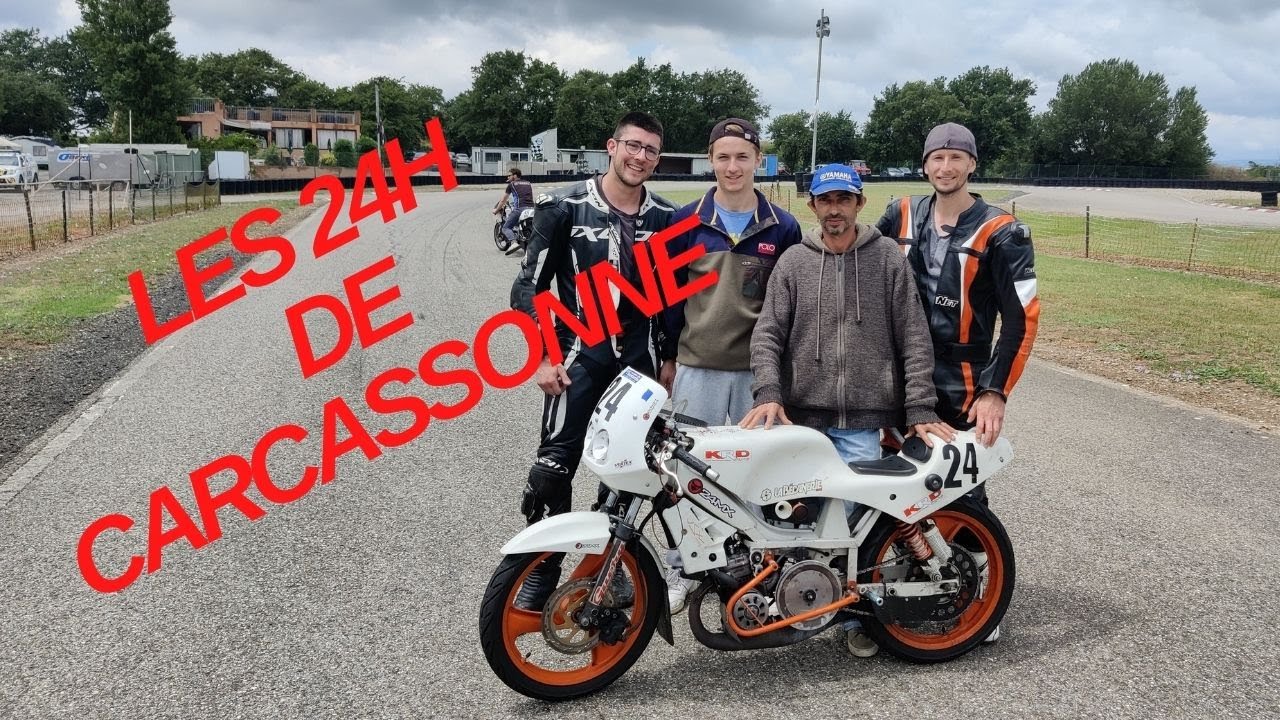 There is an advantage to getting a kart from the local shop or a team that will be at the track you go to.

I know the guys at Lafayette a bit, they seem like good guys. There is also Kompetition Karts in Syracuse. Not sure if Tony, the owner, goes to Lafayette much but he can get you sorted.

Thanks everyone. It seems like this may be worth going to see. he was asking 3500 but thats seems steep. I’d have to talk him down, but he has had it posted for a while.

Point taken on working with someone local. That’s how we did it when I raced dirt as a teenager, and that was an advantage. Perhaps, I can PM you, Paul, if you have Tony’s contact info.

The mopeds were a ton a fun! I started flipping old motorcycles and mopeds in college and really fell in love with old mopeds. Especially Puchs which I found a pleasure to work on and ride. Lafayette, NY had moped racing which I don’t think many areas had. This was mid 2010’s. Sadly, I don’t think it runs any longer. They may have moved to a different track, but I’m not sure.

There were 3 classes if I remember correctly:
Open-85cc max no variators
Variator - same with variators
50cc- Max 50cc

I was a broke college kid so I ran 50cc. I raced a 1977 Puch maxi with a motor I built in my now wife’s basement. It was a great time!

Dom, people in the open and variator classes had bikes just you posted and they flew!

I remember in 50cc some people would leave the pedals on and pedal to get out quicker from a standing start!

Here’s the bike I raced. took the lights off when it was raced 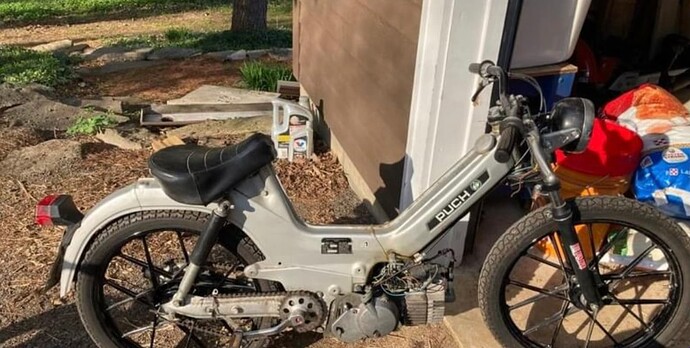 Lafayette, NY had moped racing which I don’t think many areas had. This was mid 2010’s. Sadly, I don’t think it runs any longer. They may have moved to a different track, but I’m not sure.

LMP doesn’t have organized moped racing, but they run bikes during open track days and there was a group that would rent the track for a weekend to run moped racing, not sure that is planned for this year.

Perhaps, I can PM you, Paul, if you have Tony’s contact info.

You are welcome to PM me as well.

Yup I ran with the group that rented it. I think a lot of guys came up from Boston.

Thanks! I’ll check out Tony’s business.

The kart was advertised as having a never raced VLR on it.

IN looking closer at the picture I will mention that while the motor may not have been raced, it has clearly been run. The pipe has temperature patina and there is some excess oil runoff on the end cap, both indicating it has some time on it. I would want to know how much it has been run, but more than likely they won’t know. Depending on what is included would determine the final price. Assuming the chassis looks good on the underside I would think about $2500 for the kart with a motor. If it includes the suit and helmet and that is usable maybe another $100-200. If there is an hour meter with less than 3 or 4 hours maybe a little more, but not much. Also just be aware that if this has the CRG front hubs they have a different bolt pattern than other karts.