TLDR, I know…I apologize in advance.

Maybe it’s a noob thing, maybe it’s a personality and temperament thing, but I HATE fiddling with tape on the radiator in an effort to chase down the correct water temp for the given conditions. Drives me nuts. It seems like I spend the first five laps trying to get it dialed in, only to find that I need to chase it some more after running a few more laps. Often, for me, that means pitting and adding more tape because I took too much off. DRIVES. ME. NUTS.

Anyway, I can’t seem to find a radiator curtain that is a bolt on option for my radiator, which is the one that came with my brand new x30 and comes with mounting lugs on the back that are narrower than the width of the radiator itself. AF makes one, but it’s not in stock anywhere that I can find and the vendors I have contacted have no interest in back ordering or drop shipping. Apparently they just don’t move fast enough.

So I bought the AF that is the correct width for my radiator, but does not include the brackets designed for my mounting lugs. No problem, I bought some aluminum and steel flat bar and will make a set of brackets myself.

I haven’t made the brackets yet, but in trial fitting I have found that the lower mounting tab for the curtain interferes with the seat support tube that bolts to the cassette (I suppose I can bend the tab, but that will complicate bracket fabrication because they will need to be asymmetrical), and the stud and nut at the bottom of the curtain frame that secures the lower roller interferes with the seat mount tube on the chassis itself (I can mount it a bit higher, but the curtain will then never allow the bottom inch of the radiator to be uncovered). In addition, I am finding that the curtain does not stay taught when it is operated, despite the fact that I have made very sure that both the upper and lower pullies can turn freely and are evenly spaced. Maybe this problem will get better when the whole thing is rigidly mounted…we’ll see.

Asking for a friend…

Have you considered just using a thermostat? Iame makes one for the X30 as far as i’m aware.

I cant answer specifics because Ive never owned a radiator curtain. But, the one I did use on a friends kart did not have any play, was firmly attached and the pulley mechanism was stiff enough that the curtain did not move in the wind or anything and it covered the whole radiator face.

Tape is kind of a pain and I feel guilty as heck casually littering on the track. IMHO a permanent system is better and worth getting right.

It has a thermostat, but it only acts to assist in faster warm up; it does not keep temp in the correct operating range. Tape and curtains are the only options, as far as I know.

That’s how it should be. We’ll see how it turns out. I’m a pretty good woodworker, but I have virtually no metalworking experience.

A pic might be helpful in figuring out your mounting complications. Should be able to bend or finagle the tabs on the mount to give you space to mount the curtain brackets so they don’t hit the seat struts.

But yeah the curtain is better than tape in my opinion, and should be taught and stay put when set. Otherwise, tape really isn’t that hard to manage. I tape horizontally so the adjustment in airflow is finer with each tape pull. With a thermostat you usually don’t have to tape more than half the radiator up unless it’s really cold.

It’s helpful to set an alarm light up on your Mychron so when you see the little light come on you just know to pull a piece of tape.

I’m going to mock it up and post some pics and a report of how it turns out. I just realized that the lower bracket is adjustable so I can create more clearance.

I’m sure I could learn how to manage the tape, and I do have a Mychron alarm light set, but the curtain seems better.

I’m a fan of curtains too. Never had any issue, but I’m using KE radiators, they have a full line of curtains that are specific to every model. In general, you need to find a compromise in the sense that they are usually shorter than the radiator itself. Since I live in CA, I mount them low so I max out the airflow when fully open during the summer and leaving a little bit exposed at the top won’t hurt anybody anyways.
The key is pulling it up and then rolling it down (don’t push it from the handle), this helps keeping the rollers somewhat aligned. If it doesn’t stay put it’s because you don’t have enough tension on the cords or the rollers are too free. See if you can tighten them by torquing the locking bolt/screw or if you can adjust the tension

That’s the advice I was looking for. Excellent. Thanks.

X30 thermostat doesn’t ever close fully, the pump doesn’t have a recirculating route if it were to close fully, it’s always open just to varying degrees. If it’s cold out, ‘closed’ thermostat is still open too much so you need to blank off a portion of the radiator

Made brackets. Worked out fine. Trying to get accurate relative measurements was going to be a pain, so I just modeled it in SketchUp, which I use for woodworking. Much to my surprise, it came out bang on in a single attempt. 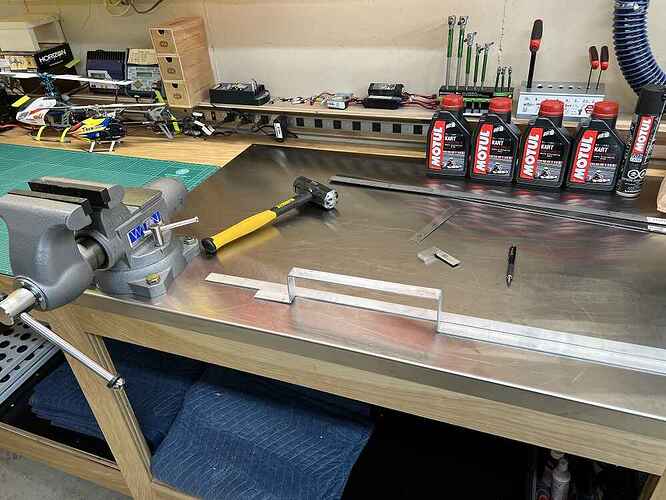 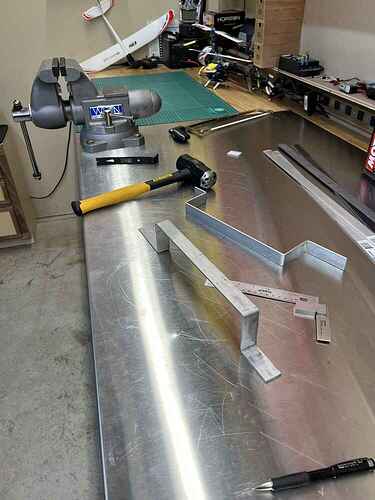 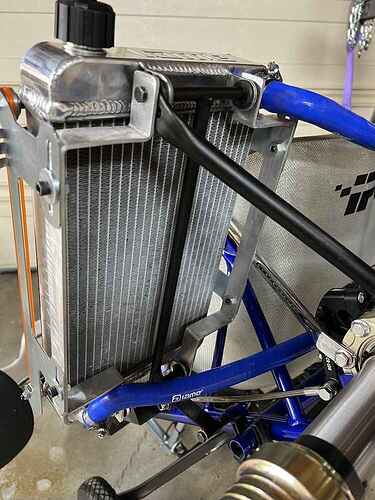 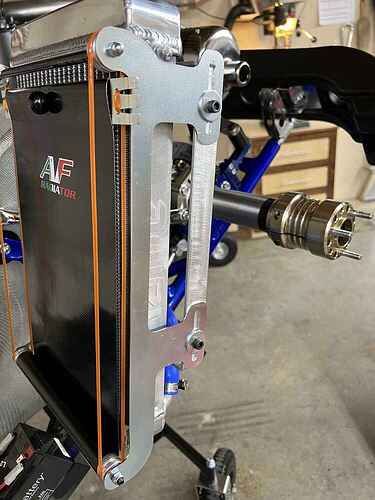 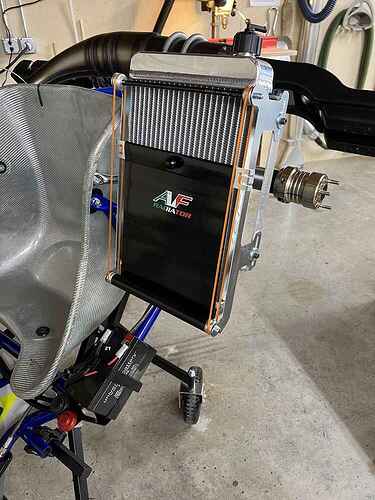 I dig it. I was actually getting ready to buy a different radiator. I only like tape cause when my friends are around me i can throw it at them. But i had a race go red flag. I had pulled most the tape. We had a restart and i couldnt get the engine to take enough heat to be in optimal. After that i said i would get a curtain. I like this.

I’m happy with the result. It’s very rigid, and the curtain is operating well. I will probably spin some laps with it tomorrow. Let me know if you want the bracket dimensions.

I wonder why brackets weren’t provided with the curtain? These are the brackets that I use, it allows the curtain to be fitted to the older, smaller X30 radiator too.

That said, I think your solution is better. 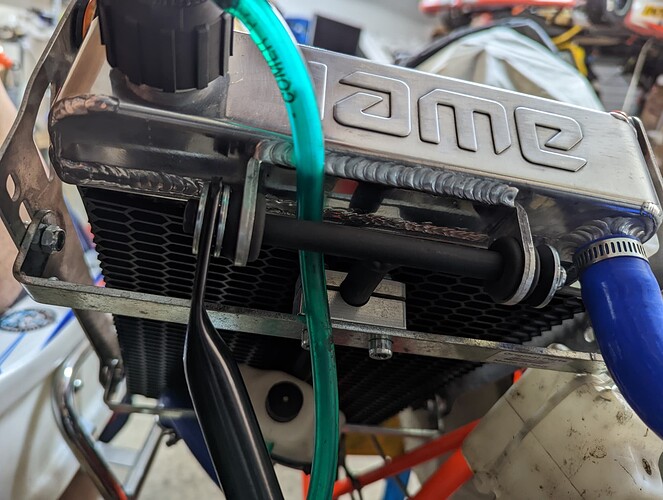 There are also two different types of thermostats out there for karts. Simple valve types with one in and one out and then you have Y set ups with one in and two out. I recently went to the Y style and have not had any issues with maintaining coolant temp. When is cold the thermostat closes and the water is only circulated through the water pump and the engine. When it warms about a certain temp, the water is diverted through the radiator before returning to the engine. It works more like the thermostat on a car. Also the Y style does not restrict flow like the straight style does. 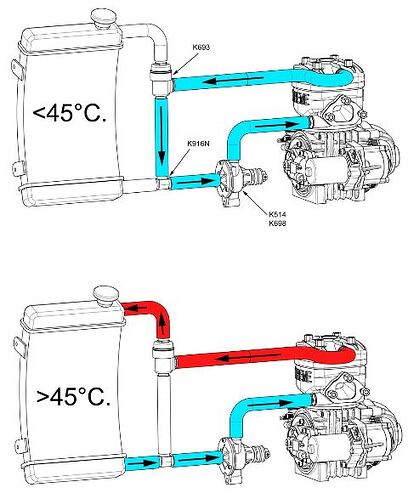 y thermostat480×588 45.2 KB
Another nice thing about the Y type is that is can be partially opened/closed to mix the cooled or warmed water going back to the engine making it more consistent. I some extremely cold cases it is still necessary to block off part of the radiator, but that is only in winter.
1 Like
CigarPundit (Adam Thurston) December 4, 2022, 5:29pm #18

Nobody had them in stock with the IAME brackets. Those brackets look good too. Simple enough to make, but I think I like the way mine support the curtain slightly better. On the other hand, yours aren’t a close to the hose, so that’s better I think.

Now that seems worthy of consideration. I like the fact that you can basically forget about it. No on the fly adjustment necessary.