I have never owned a Mychron (which I’ve heard are awesome) but I noticed some teams are beginning to move toward the Alfano 6 over the Mychron5s. Granted at most tracks you’ll find 100 Mychron’s for every 1 Alfano here in the U.S. Not saying the either device is superior or inferior, but I did find a video where these longtime Mychron folks discuss why they decided to make the switch to the Alfano.

These guys do tend to move off topic about halfway through (Squirrel!) but they eventually move back on topic. Found it interesting and worth sharing. I saw the video, but alas have not had time to look at it in detail. Would you mind sharing a couple of takeaways from it? Subbed to their channel a couple of weeks ago though.

As you said, both are great products. Historically where the MyChron has had the advantage in the US is support and documentation. Alfano documentation tended to be more “Italian-ish” which made the learning curve more challenging compared to the MyChron.

They discuss switching over to Alfano due to the apps and/or data analysis, which seem to be superior to MyChron at the moment. Alfano appears to have spent more time and effort developing dummy proof apps to intergrate, share data within a team environment, and overall make pulling data much easier. These folks discuss their own experiences with overlaying data and how they find value in it to shave time off their laps.

JaM Racing and White Knuckle Racing are a group of friends who race Lo206, and I have found both Youtube channels extremely valuable when learning this new (to me) sport.

I’m going to need a data unit & the QC issues coming up with the 5S aren’t inspiring. It’s a pet peeve of mine when companies strategize to prioritize time to market over QC & customers become de facto beta testers. The problems I’m reading about people experiencing should never get out the door.

There has been a few threads popping up with people having issues with their Mychron5s. Suprised me as I’ve always heard good things about them.

It’s a bit out of character but they are so great to customers. You literally can call Aim and ask for help over the phone and someone helps. That’s worth at least one screwed up firmware release.

Also Roger has taken time to make video after video for users and they consistently are trying to move the ball forwards.

While I have had issues with the new 5S I still like the Mychron/AIM products. I’m also invested in their additional sensors like throttle position and brake pressure.

I switched from Digitron to Mychron in about 2001. About 3 years in it failed. It had 1 year warranty. I mailed it out on Monday, overnight. I told them I had a race that weekend. They had it back Friday repaired at no charge. Not even shipping. So two years out of warranty and fixed for free. I decided they would have to mess up pretty bad for me to look elsewhere. So far they haven’t

The unipro has Pac-Man 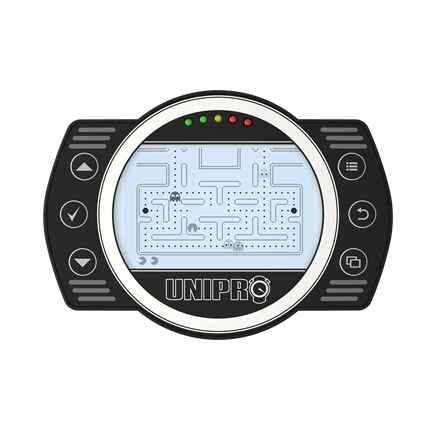 B ahhhh m’y bad. That’s what I was thinking of

What do you think of the mobile apps for Alfano? Do you find them to be useful?

I didnt use it myself, some friends did. The main thing was to be able to use a tablet, which is a great thing imo. Carrying a laptop around is pretty annoying, and the GUI is a lot better

Its an interesting comparison. Alfano effectively made dashboards a thing in karting (lap times, rpm, temp but no logging), AIM effectively brought data logging to the masses (with a rubbish dashboard). They are meeting in the middle now.

Looking at their data analysis software options, it looks like they are still following the same trend. The Alfano app and Off Camber Data are pretty but not very powerful. RaceStudio looks like its from the 90s but can do anything you want to.

As an engineer, I prefer RaceStudio, the amount of times I’ve tried to use other software’s and I just can’t do what I need is infuriating. The Alfano App and Off Camber Data have most of what you need to tell a driver to brake earlier or turn in later, but they just don’t have the capability to do vehicle dynamics analysis like RaceStudio does. When I’ve been forced to use them, I’ve ended up exporting the data to excel or matlab to be able to get the info I want.

So the question really is do you need vehicle dynamics analysis? I think most people probably don’t. I can totally see how the app fits the bill for most people though.

Alfano documentation tended to be more “Italian-ish” which made the learning curve more challenging compared to the MyChron.

You must have seen the early AIM manuals, now that was “Italian-ish”.

Could be a wrong observation on my part. Let’s say not US English centric.

I have the Alfano 6, but I just recenlty got it so I’m not all knowing on what it can/ can-not do. I know the settings originally were configured european (kmph, Celsius, etc). It was easy to change those settings, but the RPM reading was bit tricky. 1.5 RPM vs 1,500 RPM. I was able to change that reading in the settings, but it wasn’t the most intuitive thing to figure out. I had to play with it some to figure it out in the multiplication factor setting.

Now I’m messing with the two software versions, Alfano ADA vs. Alfano Pro and trying to figure those out to see which one I like better. It looks like Alfano is coming out with another unit, called the Alfano Pro; as a picture of what I’m assuming it is-is on the home screen of the Alfano Pro app when you open it. But with the Alfano 6 I can still use either app, and their both free, so thats nice.

I will say the one thing I can’t stand is that their app only works on phone or tablet. I primarily use an iMac but it won’t work on there. Just my iPhone or iPad, which is annoying because I’d rather use my computer when I’m home; and others while I’m at the track.

One tip if anyone does go Alfano, is do NOT do the software update if your at the track and tight on time. The firmware download on mine took 40 mins +/-. (But my internet speeds at the house suck, so that could also be a factor)