(Almost) Everything You need to know About Spark Plugs

So I’ve had a question that’s been bugging me for a little while concerning spark plugs. So I know that there are different temperature plugs, but I can never figure out when to know to know what plugs to run. I keep hearing that people are running 08 or 09 or 10 plugs, but I have no idea.

Does anyone know a bit more about Spark Plugs that could help?

09 will run hotter than a 10 so you would perhaps use them in cooler wet races.

depending on the brand of plug, one brand 1 is cold and 10 hot. Another brand starts as 1 is the hottest. So numbers from one brand to the next is not apple to apple. ALSO, as HOW I stated that is incorrect if you really want to get to the inner workings of A spark plug. The number is NOT how hot A plug fires at…Its how much HEAT is retained in the plug. A colder plug will disperse/transfer the heat faster to the head keeping it cooler. A hotter will not transfer it as fast And warm up faster and stay there. Go to A parts store and look at too extreme hot and cold next to each other. In front of each catalog autolite or champion they explain what, and how A plug works. It will even tell you how to read them.

but I can never figure out when to know to know what plugs to run. I keep hearing that people are running 08 or 09 or 10 plugs, but I have no ide

NGK are the ones I’ve used whenever I can…

Typically on a TaG you’ll probably be on a 10 unless it’s wet, you’re running suuuper rich or you’re breaking in the motor. In those cases you might run a 9. On really hot days you may use an 11, probably not on spec PRD though.

Another thing. “R” on the NGK plugs does not mean “Racing” it means resistor. In that the plug contains a resistor. Ideally you want a resistor in the plug or the lead, but not both. Check your plug cap to see if it is a resistor cap.

The next thing is the composition/metallurgy of the plugs. For racing you’re looking at EV, EG, EGV, and EIX.
I think EGV is less common in the US though.

I usually have a couple of EVs and EIX’s on hand. The EV’s are cheap as chips and great for plodding around on in practice. Then I’ll probably put in a new EIX when it’s showtime. 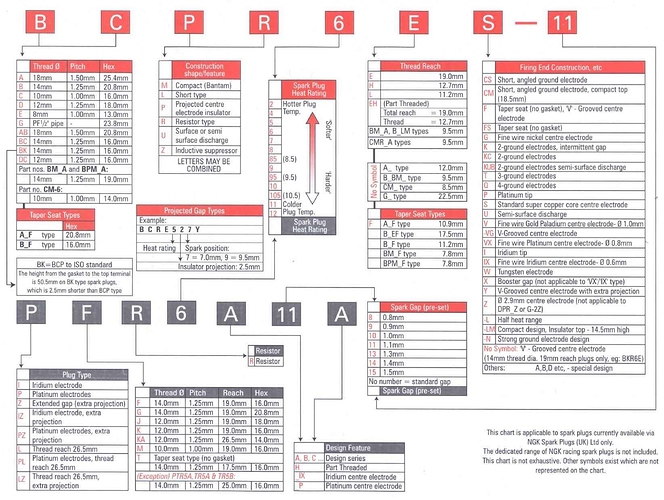 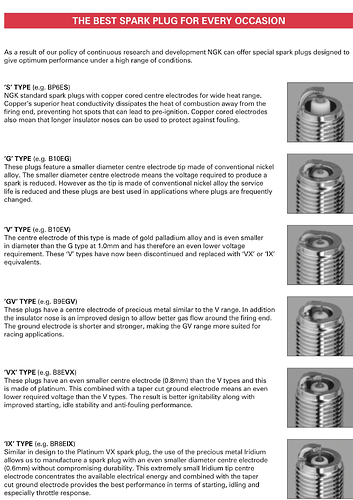 WHEN SHOULD I USE A RESISTOR SPARK PLUG?

A: NGK “R” or resistor spark plugs use a 5k ohm ceramic resistor in the spark plug to suppress ignition noise generated during sparking.

They are also recommended on any vehicle that has other on-board electronic systems such as engine-management computers, two-way radios, GPS systems, depth finders or whenever recommended by the manufacturer.

In fact, using a non-resistor plug in certain applications can actually cause the engine to suffer undesirable side effects such as an erratic idle, high-rpm misfire, engine run-on, power drop off at certain rpm levels and abnormal combustion.

This is a great guide by Gordon Jennings. It’s old, but gold. 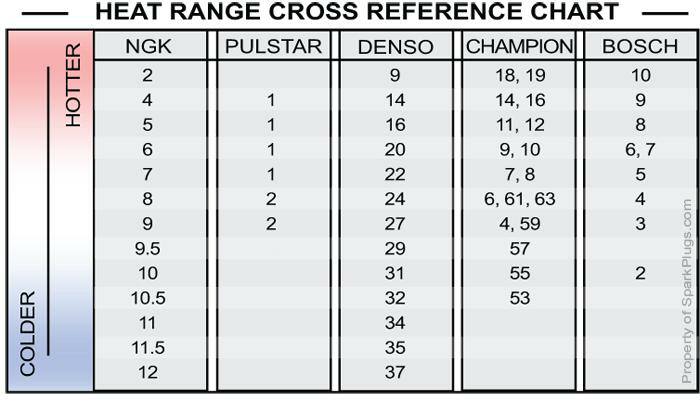 That’s my understanding as well

BPR6EIX “Hotter” plug. (Suitable for OHV four stroke output levels)
Note how much of the insulator core (white part at the firing end) protrudes into the cylinder 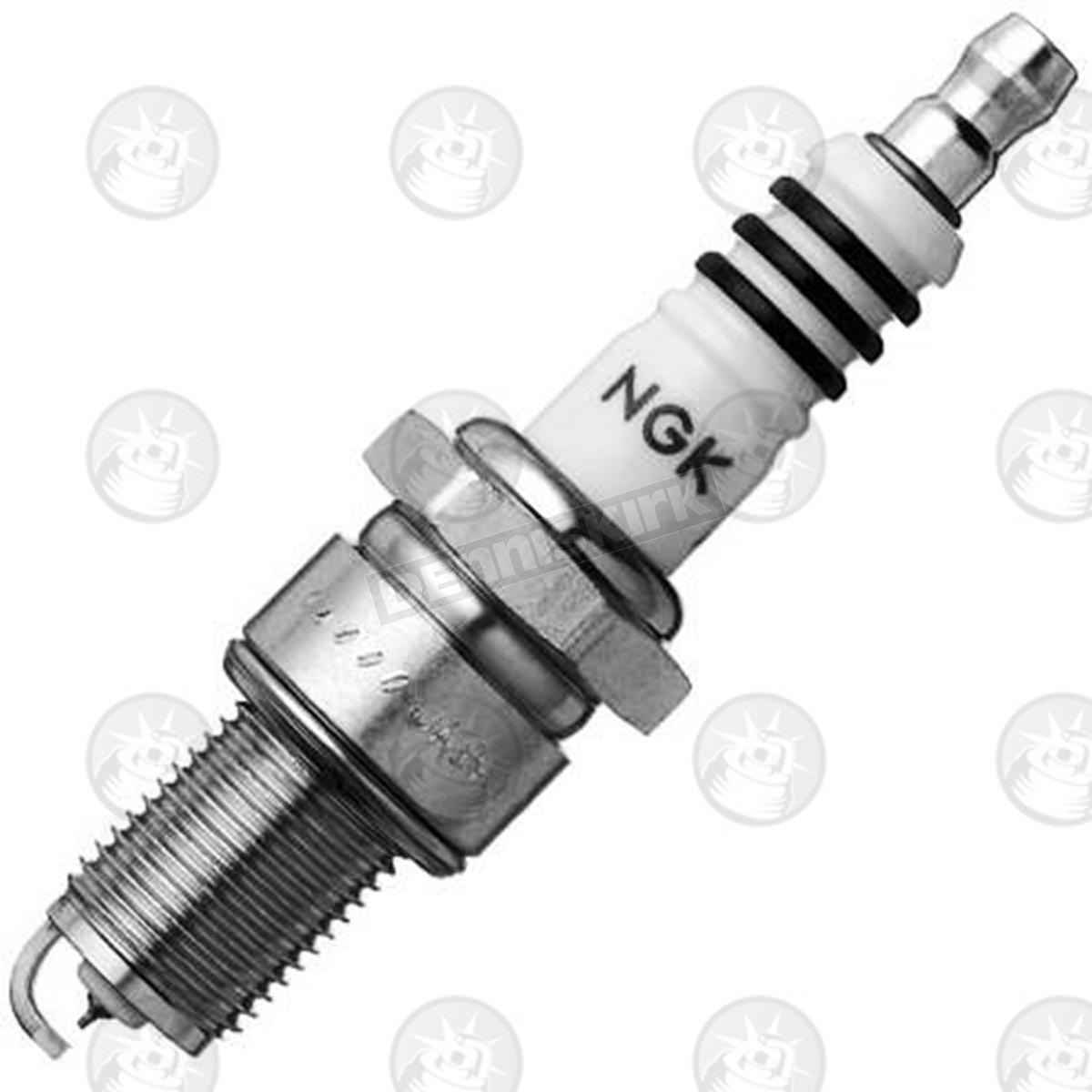 BPR10EIX 'Colder" plug (Suitable for higher output, KZ, OK and certain 100cc on hot days)
You can see the insulator core barely protrudes at all 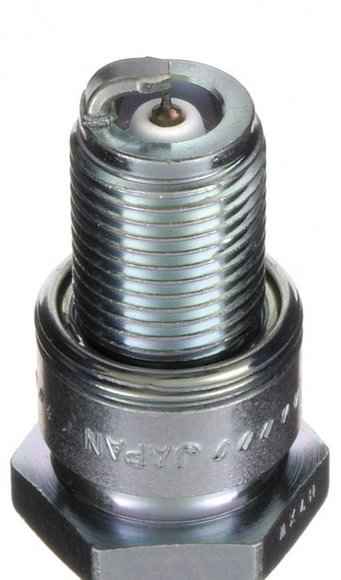 I currently race a senior X30 where both the BR10EG/BR10EIX and the NGK R6252K-105 plugs are allowed. I noticed that the R6252K plug is suggested here, which is usually my go-to site for X30 tuning. Is it actually a better plug than the BR10 or its BR10EIX iridium variant, or is the suggested plug due to the SKUSA regulations?

The latter. The BR10EG is allowed, but only during rain conditions.

What about the gap? How can i identify what is the right one

What plug is usually run for senior KA100?

Saw that in the IAME rules. Seems like they missed the “E” in the 6254 model, since I don’t see that plug anywhere.

Would somebody explain to me the purpose of making spark plugs a tech item?

Maybe, we’ve got KA’s from 3 different builders and the only plugs any of them have used have been the B10EG or BR10EG

Heat range could slightly effect performance and a longer throw on a plug could extend into the head and consume combustion chamber volume increasing compression and performance at the same time. That’s why they standardize what the plug needs to be.