Went through some of the past forums but couldn’t isolate the question a hand. I’ve heard people say that the TB Kart Chassis are almost identical to the Tony Kart Chassis by design. So I was looking through the Tony Kart set up guide but I’m a bit confused.

So you have eccentric both top and bottom, so which controls which?

Top= Caster vs. Bottom = Camber (as an example)

Then I noticed the Tony Kart has little arrows where where have a round diviit, which I’m assuming indicate directional but again I’m assuming. Looks like both the bottom and the top have one on the Tony Kart diagram, but mine don’t have arrows on either.

Essentually what I’m aiming to do is go completely neutral on both caster and camber. As I’m new to chassis tuning and I’m trying to go baseline. But each esentric has a round/raised section and I’m not sure how those are suppose to oppose each other from top to bottom?

Round Notch I’m assuming means the same as the arrow: 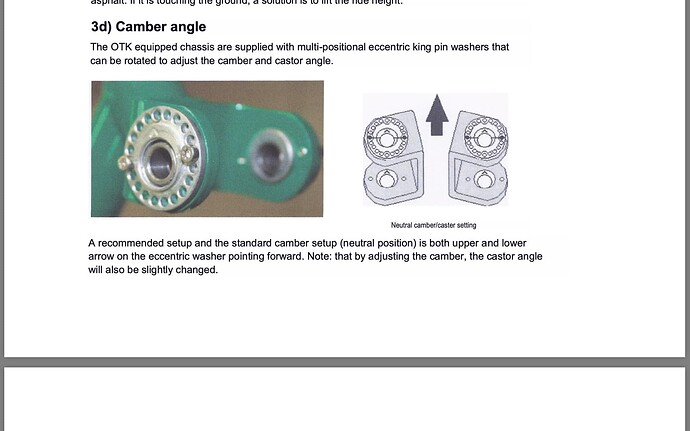 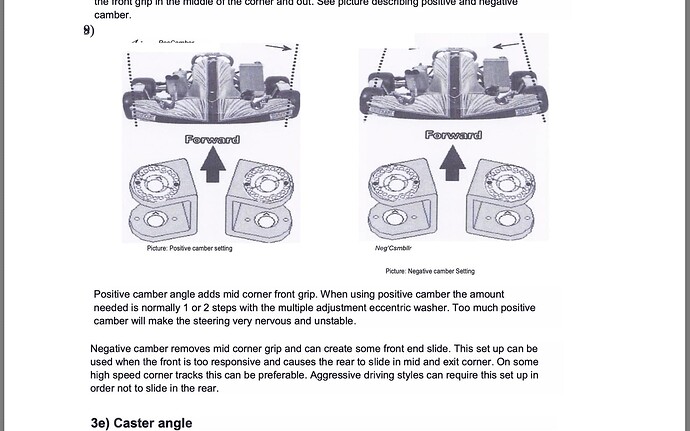 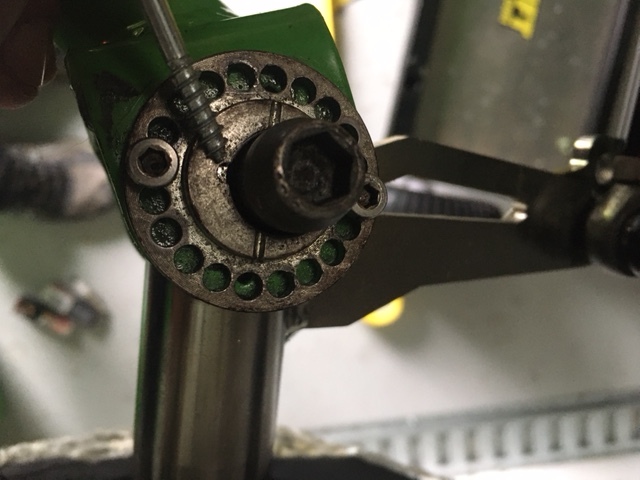 Round/ Raise portion of the esentric in question: 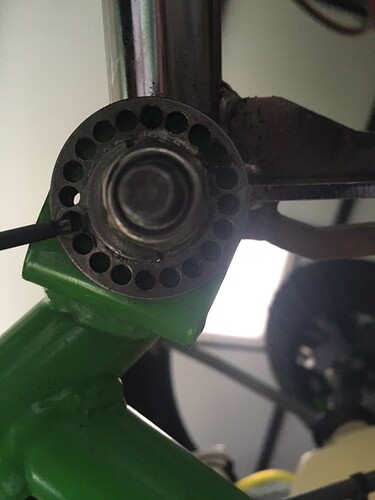 I was getting so frustrated by what I know is a simple concept, that it had me out in the garage with a level trying to determine which does what, lol.

Little arrow pointing forward (top and bottom) on a OTK is base setup.

Look at the shape of the eccentric and follow the line of the kingpin. Moving the king pin forward and aft is castor. Left/right Is camber.

I will try to keep this simple. Using the following image of what each eccentric does, you can visualize the movement of the kingpin. 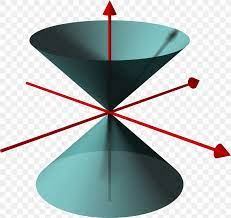 Now imagine the upward arrow is your kingpin. With the thickest portion of the raised area (where the dot is) is lined up with the forward most point on the chassis on both upper and lower eccentric pills, this would be neutral.

To start simply, if you only rotate say the top pill. As the dot moves away from the center line of the chassis, you are reducing camber (negative camber is top off tire leans in) 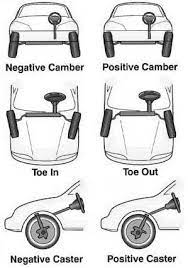 and slightly removing caster (bringing the fore and aft angle of the kingpin more upright and less angled back).

The problem is you cannot move only one pill (top or bottom) without affecting both caster and camber. To get around this point, you have a pill on the bottom as well as the top. By rotating both pills in the same direction or opposing directions to some varied degree you can achieve your desired adjustments. This only works up to a certain extent and your adjustments will shift back the other way. In other words, you cannot get max caster and min camber at the same time. There will always be a trade off, because the pills change both angles simultaneously.

On an alternative note, there are kits out there that do allow these adjustments independent of each other. The Sniper kit looks to be the best bolt-on option I have seen. 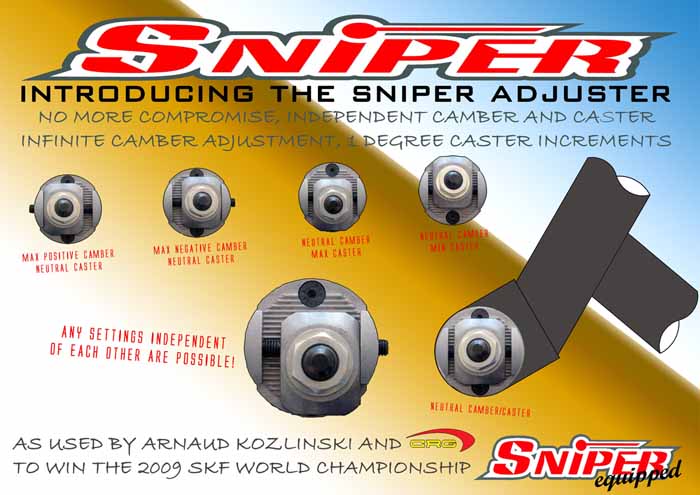 The little round marking serves the same purpose as the arrow on the Tony Kart. Both top and bottom have the same range of rotation, so effectively both influence caster and camber.

I would start with the baseline Nick mentioned of both markings pointing straight forward towards the front of the kart. From there I find it easiest to use the top eccentric to adjust camber, and use the bottom eccentric to add caster as needed by rotating 180 degrees from the baseline position.

You’ll want some sort of alignment tool in order to measure the camber and toe. Generally people use a laser alignment tool such as Snipers, but toe plate work well too. If you’re in a pinch you can just mount up some bare rims and measure from outside to outside to find your toe and camber, but you’ll need to ensure that the steering is straight. If turned left or right it will begin to alter your measurements due to ackerman and caster.

A good starting point is 0mm camber and 2mm toe out per side. Are the eccentrics on top and bottom identical? Almost looks like the bottom one has less offset.

So those lines on the eccentrics, just run both of them top and bottom inline with the kingpin or opposite of how I have it? 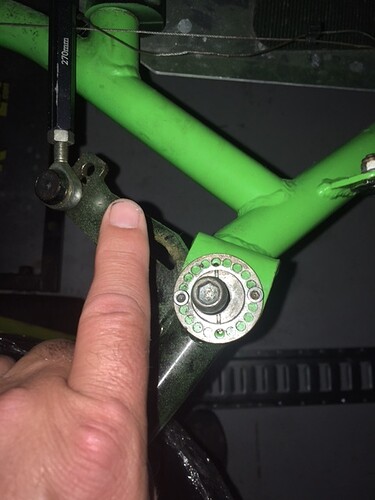 For neutral, position the top pill as shown and the bottom pill hole positioned back or rotate the upper pill 180 deg and run the lower pill with it’s hole positioned fully forward. 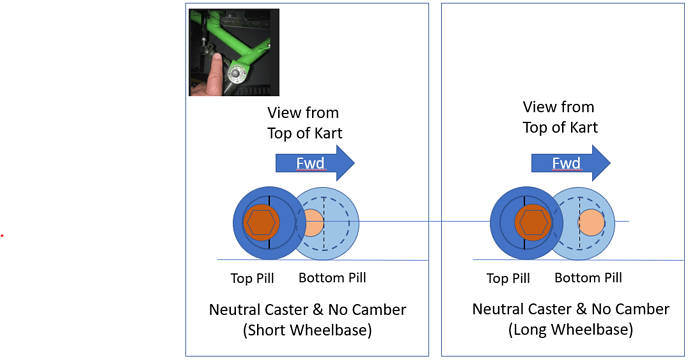 Righetti also makes camber-caster (upper-lower) plates that adjust on the top/bottom of the kingpin like the eccentrics, albeit linearly. If I were to buy the bolt on sniper kit would it make more sense to just have the adjusters on the top off the kingpin or would it be more worth it to buy 2 sets to have a top and bottom adjusters. Looking to mainly run club this season with maybe a CKNA race somewhere.

Assuming you are talking about this one (Sniper Caster Camber Adjuster), it can do camber and caster both. No need for top and bottom. If you need to go to an extreme (which you shouldnt), you could always still put an eccentric pill in the bottom to get you where you wanted to go.

In case my post was confusing, the Sniper system combines castor & camber sdjustment into a single unit (mounted at the top of the kingpin), whereas the Righetti utilizes independant top/bottom kingpin mounted adjusters for camber/caster.

Pretty sure the RR are billet pieces. Sniper base plates look like sintered pressure castings, which is mfg expedient, but doesn’t make for the strongest part. I have an idea for a machined billet replacement part, but it would need to be ~2x thicker/taller compared to OEM, so it could only work if the kingpin has enough length to still allow for the added dimension. But it would be more resistant to fracturing under a torque load.

They only crack if you unnecessarily crank the small screws tight.

I have an idea for a machined billet replacement part 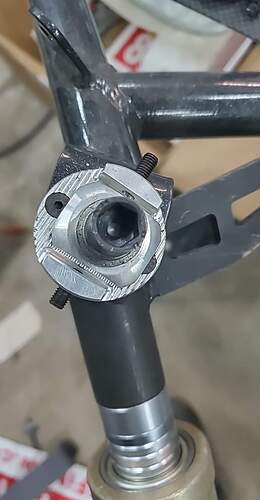 Nicely done. Aluminum or stainless? Looks like you’ve designed a complete set. I was thinking of simply retaining the upper OEM “pill” & machine a 2-piece plate, with the grooved section stacked directly on top of the remaining plate that has the stops with threaded rods for camber adjustments. The 2-piece stack up is why it would have to be thicker, & so the grooves would run right up to the stops like OEM, which I assumed was necessary for reasons unknown, but apparently not.

How has yours worked so far?

Where did you get them?