Another noob looking for advice

Hey guys, total noob here. I apologize in advanced as i know there is tons of great information already posted on here but i have a few questions so i figured this would be the best way to at least get pointed in the right direction.

To the point.
I’m looking to get into karting. my biggest questions are being about the type of kart chassis. as i mentioned I live in southern WV so most of the tracks near me are dirt track style racing and will probably be the main setup I’m going for. But with that being said I’d like to have a kart capable of being run on an asphalt road course style tracks as well. can a kart chassis be setup to run both styles?
Looking to build a shifter setup, I’d like to buy a bare chassis and build it up myself seeing how I enjoy that aspect of all motorsports. so any websites, companies or any other recommendations would be much appreciated.

Short answer is no. Chassis are dedicated, venue-specific designs. Although a dirt chassis is physically capable of running on asphalt, it probably wouldn’t be allowed, nor would it be compatible; inch + high sprint/RR chassis & dirt courses simply don’t mix.

I guess you could get & do both. That’s up to you. You know what’s available in your area relative to the distance you’re be willing to travel, so that should help with the decision.

What Spencer said. The oval karts are designed to go left. I think these below are oval chassis: 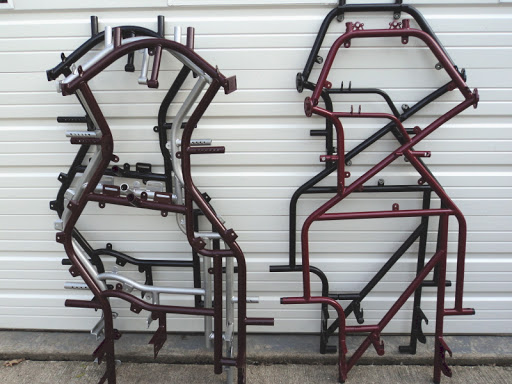 There are a couple of exceptions out there where tracks run traditional sprint chassis on oval, as well as sprint tracks that are mostly left turns and an oval kart works OK…

But as a rule, it’s rare for the two to crossover. Which is a bit of a bummer.

Building a kart from scratch is more daunting that it might seem. Especially when it comes to handling dynamics, flex and geometry.

I think it’s worth buying one to start off to learn from so at least you can have fun driving while you work on designing and fabricating your own, improving things as you do so.

Shifters are pretty rare on ovals in anything but the outlaw/UAS (UInlimited All Stars) classes. But they often just set the kart to run in 3rd gear and let it rip… in some cases I’ve seen shifter engines with the transmission literally sawed off and just ran as direct drive😂

Maybe your goal for your own chassis could be something that’s suitable for both oval and sprint.

If you like building and tinkering, the outlaw classes are going to be right up your alley. They have some crazy machinery. Dual 100’s, 125’s, 450 four strokes, JAWAS, rotary/wankels. You name it.

when i say build a kart i don’t mean actually fabricating the frame. i’m wanting to buy a frame and build it up from there is what i meant. but i understand what you mean. and i appreciate the info. like i said just really getting a feel for thinkgs atm to see what direction i want to go.

Gary,
Oddly most race karts aren’t built per se. They are usually sold as rolling chassis and you add an engine package.

That doesn’t mean you couldn’t buy all the pieces and do it yourself though. It might be hard to do that economically, not sure.

If you have lots of patience and are willing to probably spend more money in the end, you are welcome to build it up from the frame and add your own components. But it would be cheaper, quicker, and much easier to buy a rolling chassis as Dom said. That’s the normal thing that’s done.

Building up from a frame can be a good exercise in learning how everything is put together though. The tough part is you’re going to probably be making a dozen trips to the hardware store to find odds-and-ends bolts you need.

Another thing to consider is that the chassis manus use known parts that play nice with the handling. So, the wheels are correct etc.

For example, I was gonna buy a different set of rims for my kart and my engineer shut me down. He’d prefer to use the rims that are standard in that that’s what he’s been tuning for and what compkart designed the chassis to work with.

oh ok, makes sense. I’m not opposed to buying a chassis, i just like the mechanical side of things and would kind of like to have my hands on as much as possible to understand how things work and go together.
Is there a company or website that is the go to for parts and or chassis? or is there just so many choices that everyone has their own preference?
I’ve been reading as much info as i can online to get up to speed as much as possible before I jump in and decide what type of kart i build, but it always seems to be more helpful to talk to people with actual experience. and lastly, what is a good site that shows kart track locations and give info on them?

Comet kart sales seems to be well stocked and very popular. Most of the time I bought parts from my team. The tent guys all sell stuff which is why we advise using whatever brand the teams use.

Good sites for tracks and info: doesn’t really exist. KP has a track locator. You can find a track near you and check it out online or ask about it. Or just call them.

In terms of getting hands dirty with kart… in time you will replace every piece on that roller if you drive it long enough.

I would recommend buying a complete used kart, then tearing it down completely, cleaning it, then reassemble. This gives you the knowledge of how they work and go together without having to piece together parts. Plus, you should never assume that someone else put everything together perfectly so you can know you’re starting with a good baseline. 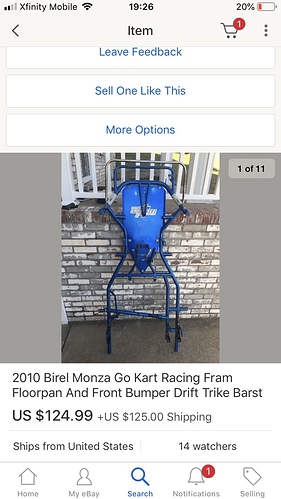 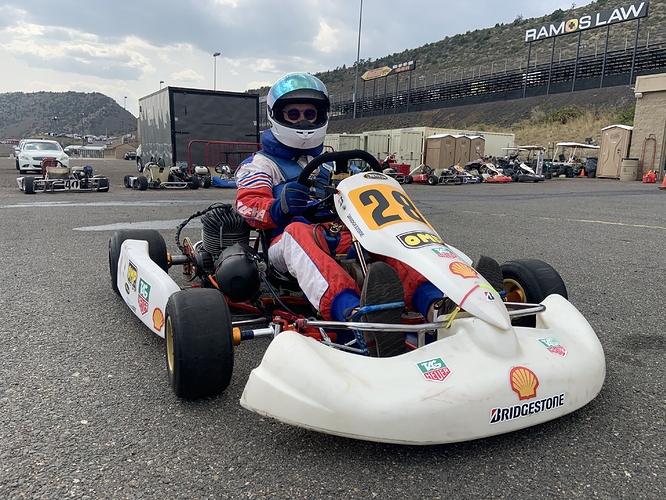 0A81EBAB-4F94-4180-8C77-7D829A0841B1.jpeg2851×2138 2.62 MB
I built my kart from the frame up and assembled it piece by piece. I also repainted the frame and stripped all the paint! That took about a month! I won’t do that again! All in all It took me around a year to get my project done. To other posters comments it was definitely an exercise in patience as I had to wait for parts to come up on eBay etc. Including getting a custom brake caliper mount machined for the MCP setup I purchased.

In the end it was worth it as I know every nut and bolt on the thing! Speaking of nuts and bolts I bought hundreds! Cost wise I would’ve been better off dropping $1500-$2500 on a used one and replacing worn parts as I went along. However my kart is unique and everyone stops me to ask what Kart I have. I wouldn’t have done it differently. It’s great to know I’m driving a Unique machine I assembled from scratch!

Mine is a Birel frame which made finding parts easier! However I got lucky. So I would definitely take a look at the used parts available for the chassis make and frame before pulling the trigger! In the end it was worth it but I would probably go the used/new route when I buy my next one! I’m never selling this one!

If youre looking to do shifter racing or TAG on asphalt, the Woodbridge Karting Club has shifter/tag classes and they run at both summit point tracks located in WV. I would get a good used chassis and learn as you go, karting is fun and a lot of information to take in.