Anyone use "American Hauler" brand trailer?

Im shopping for a 6x12 trailer, and there seem to be a couple of dealers locally for American Hauler. They seem to be cheaper than the competition, but on paper match up or even beat the competition. Im just curious if anyone has owned one and how it stood up over time? Im close to pulling the trigger on placing an order for one.

I have a 6x12, though not that brand, but I’ll chime in just to give some ideas on improvements I made to mine.

Probably the most fundamental problem i see with at least the lower priced end of the trailer spectrum (Usually the smaller end of the scale, which includes 6x12) is exposed/unprotected wiring. Mine had no insulation or protection, even where it runs around corners & metal structure.

The wiring is the most basic & fundamental thing to address. It has to be shielded from physical wear to prevent shorting out & burning. If you do nothing else, inspect the wiring & plan to remedy if/where needed.

I originally just planned to lay down some floor matting, but wound up tearing out the thin (cheap) wall panels, split looming all exposed wiring, added insulation, installed 7 ply board walls in addition to the floor matting, plus trim, transition flaps, & etrack mounts. Basically, a full interior redesign, adding tie down/mounting functionality to both the walls & floor for the effort. Something to consider.

What was the cost of upgrading your interior? How much time did it take you to do so? Just curious as I too am looking to move to an enclosed setup. I don’t mind putting in the work, but if the price difference is minimal enough, I would rather have it already done.

We used one for 3 years and no issue. Have since sold to the Brother in-law and he’s now used for 3-4 more years with zero issue. Current used as painting contractor so it’s towed daily.

What was the cost of upgrading your interior? How much time did it take you to do so? Just curious as I too am looking to move to an enclosed setup. I don’t mind putting in the work, but if the price difference is minimal enough, I would rather have it already done.

Probably around $700 for everything (PVC mat, glue, wood, deck treatment, aluminum trim transition flaps, fasteners, wire split loom), plus a few tools I needed. A 1/4 impact driver (I wanted anyway) was a must for mounting the wood & ETrack to the trailer hard points with 5/8" grub screws & fender washers (Don’t skimp here). There was an expected degree of feature creep in the project, but I managed it & got it done, doing it on/off over the dry season as priorities allowed, so start-finish was about 1 yr.

Laying down the adhesive & rolling the PVC floor matting was kind of a grind with small margin for error, but good planning makes the difference. Only issue with PVC mat is that it gets slick when wet. There are floor coatings that offer traction material to mitigate that issue, though the application process is more involved & the rough surface is prone to trapping debris. I just prefer the PVC because it’s relatively chemical resistant, is easy to sweep, & stays relatively clean. Plus, I don’t do wet track days, so not an issue for me. All said, it added about 250# to the trailer.

I highly recommend incorporating ETrack if you can swing it. Lots of tying/mounting options, & very structurally sound (with good installation). 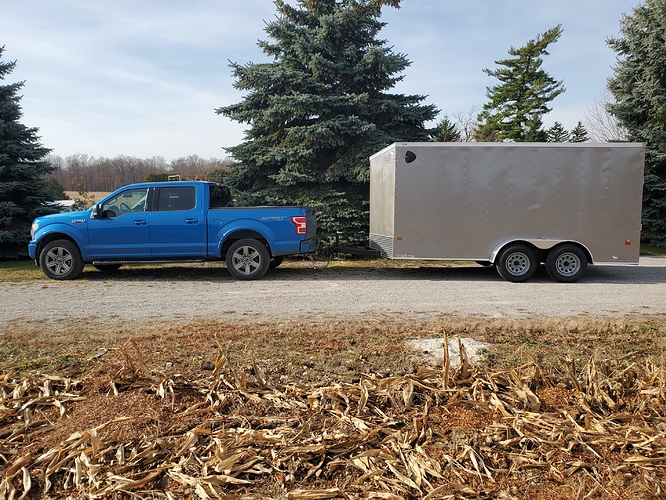