Hey guys! I just joined the sport last week and decided to with the IAME X30 for more throttle control and speed. I put about two hours on the engine over the past week and have done some general maintenance (chain, cleaning, pulling on things, etc).
I was not misinformed when it came to how much upkeep these engines require and I will make sure to set aside time to keep it running smooth. My only concern, as a beginner, is that if something needs some work, I may not notice.
I’m just looking for some feedback on things to look for on a regular basis that I may not realize otherwise. Like I said, my main concern is the engine, but I’m also looking for things on the chassis, exhaust, wheels, etc. I’ve read the owners manual and have a general idea of when to do things, but there’s only so much a book can tell you. I find the best way to learn is talking to guys with experience.
What are some things you guys check and maintain frequently rather it’s every run, every five hours, ten hours, or even once a season?

Pay attention to temperature in mychron when running. The hose to radiator can shake off. This is a great way to fry an engine.

Check pressure one last time before going out in case of slow leak.

Check you water level, when cold. An engine without water will read a normal temperature on the gauge. But the motor won’t very long.

along the same lines, let the engine get to temp before hammering it.

Prep before going to the track/before first session:
Change gear oil
Clean clutch drum and frictions
Lube clutch needle bearing
Inspect driver sprocket, main sprocket, and chain for wear
Inspect flex and insulation
Inspect spark plug/replace if necessary
Nut and bolt the whole kart
Check brake pads
Refill with water
Charge engine battery and Mychron battery (I just leave them on a trickle charger all the time)
Warm up to 120* on the stand and let it sit for a few minutes before first session
Check water level
Set tire pressures

After each session:
Check hot tire pressures
Lube chain
Check for wear in the chain/sprockets
Overall look over of the kart
Take notes/look at data/video
Make adjustments

After the weekend:
Drain water
Clean everything thoroughly
Check for damage
Prep for the next weekend, leaving the water out until you’re going to take it again.

My two penneth. X30 likes to run around 60 deg ©. Keep an eye on it on track, if it’s too low block up some of the rad vanes with tape.

At 10 hours lift the head off and clean the top of the piston, examine the face with a magnifier for cracks starting. I change the piston at 15 hours and piston/crank at 30.

There’s a great app called ‘jetting for IAME kart engines’ that will tell you exactly where to set your carb screws for atmospheric conditions. I use it every time I go out.

Chassis - WD40 is your friend, after a day on track coat the exhaust and rear axle. You can spray the brakes too (I do) but for gods sake don’t forget to degrease em with brake cleaner next time

Great advice guys! I’ve been leaving all the water in the kart, but upon reading this I’ll start draining it.
A few more small questions - I have been advised that I should send the top in for a rebuild every ten hours and the bottom end once a season. Should I work on rebuilding the top myself and send the bottom off, or let the pros handle both ends of the motor?
-I have been leaving the fuel in the kart, but it’s only sitting until the following weekend.
-Also, what kind of lube are you guys using for the clutch?

If you’re going to be using it every weekend it’s not a big deal to leave the water in it. Just if it’s going to sit for weeks or months definitely drain it. The minerals in the water will start to leave deposits if it sits for a while.

Personally, I’d rather have the pros do it. The risk isn’t worth the reward to me. It’s either spend the money now and know you have it done right. Or cheap out now and maybe have an issue that’ll cost you more to fix later.

Fuel is fine to leave in. It’ll start to stain your tank and fuel lines though. I take it out and put it in my fuel jug just so it doesn’t stain everything.

I’ve been experimenting with lube for the clutch. I don’t even know what the stuff I’m using now is. It came from work but it’s made for high speed and high temp bearings. You want something that isn’t too viscous or it’ll fling into the clutch drum, make a mess, and cause slipping.

I’d say every 3-5hrs to take a look at the reeds (make sure there’s no cracks or chips), put a new spark plug, and a new carb diaphragm kit. Pretty cheap way to keep it from losing power.

i learnt the hard way with a rotax,which is why im moving to X30.

So did I but I’d screw up the rotax too, eventually.

I drove mine till it exploded in prefinal. 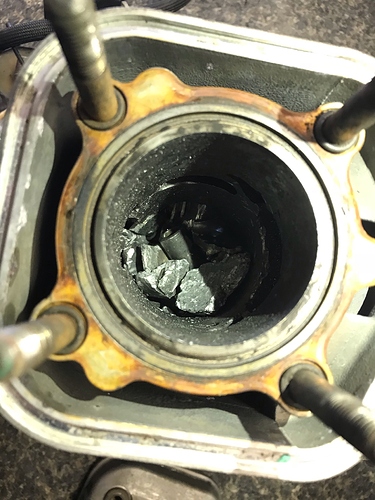 is the rubble in the barrel the piston

What’s left. The arm went through the bottom.

did you dump it or keep it

It was undramatic… start time is selected for engine blow.

We dumped it. I had driven a session without the hose attached. When I came into pits, the stickers on the cylinder head had all burned. The decision was to run it and see. Not worth fixing with that much heat damage, according to my engineer.