Hmm… I was under the impression that the MXQs were one step “freer” and better on temp control than the MXCs and closer to the discontinued MXLs.

Lighting some candles and chanting to summon @Paul_Montopoli if you or anyone else has experience on Mojo’s on 3Fs or 9Fs.

We thought the same but someone who should know corrected us but maybe some others on this forum know for sure.

MXLs and MXQs, while I am not an expert on OTK wheels, should be better on a hot day with higher grip than MXCs.

I have not run Mojos D5 with AMV wheels. I only ran a Rotax race once in 2018 prior to starting with AMV. My guess would be go with 9F. I also got a call today from a very experienced and fast karter who has struggled a bit with Mojos and having too much grip. He ordered 9Fs.

Thanks for the input Paul. Is there any noticeable difference in temp control or handling using the 9F hubs? Haven’t looked close enough at a KR to see if those are the factory hubs.

My Xmas list is getting long. Do you ever have a scratch and dent sell? Lol

I have not measured it. I only know from what AMV has told me that there is a difference. I suspect it is small. Probably only noticeable at the extreme by a top level driver.

Here is some wear on a new set of tires with maybe 30-40 laps. The first inside 2” is getting destroyed and heavy feathering in the first 4”. I was trying to keep the tires cool and stopping in the pits every 7-8 laps. It seems interesting to me where there is a very defined start/stop of the strip of heavy feathering.

I think I’m going to try longer rear hubs to keep the tire flatter. Also my other suspicions are that I’m too low on pressures and really overworking where the tread meets the side wall. Tire might be over flexing and friction is killing the inner edge. 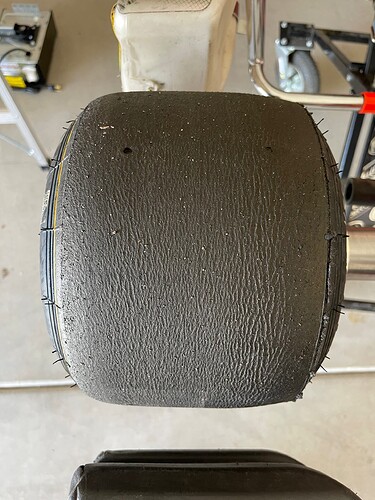 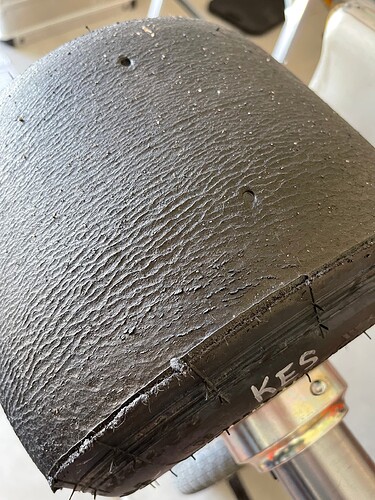 As suggested in this thread; Have you tried flipping every 15 or 20 laps? If I remember Mojos were tough to dismount and mount, so that might not be fun. Is there a drop off in lap time over the 8 or so laps? Although, it seems obvious, measuring tire temps might help get some insight.

I made a really cheap tire temp gauge by using the MyChron as the meter and buying this thermistor assembly on Amazon and use a marker pen to write down tire temp on the side of the tires. (Eliminates the need for paper) 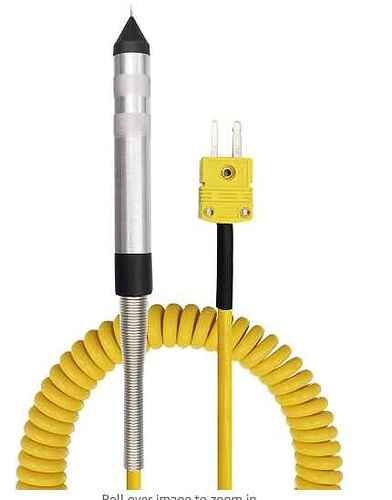 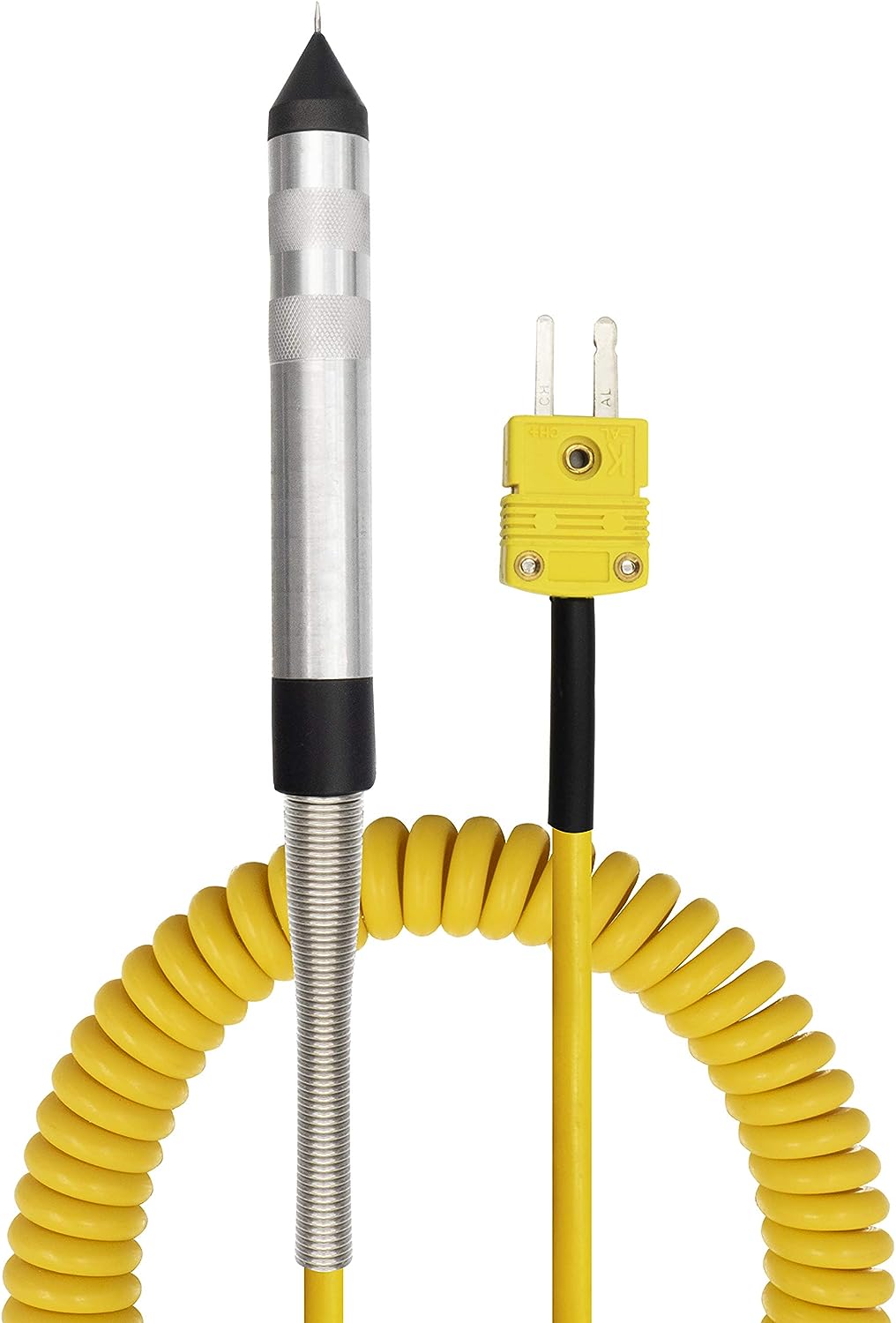 I’ve always wondered about this. The fall off in temps is quick. I get that the sensor penetrates the tire and checks internal temp. Is there no way to have sensor that reads actual temp while driving (like in games?).

Expensive, but tire temps would be one thing I would like to monitor that the MyChron doesn’t allow out of the box.

@KeslerDesignWorks have you looked at other drivers’ tires in your class? Is their wear similar?

I’ve thought about buying the IR temp sensors. My engi-nerd brain really wants that data. Not sure I’m at that skill level yet where that information will be valuable. Also it’s usually be obvious if the tires are in that window due to feel and look of the tread. Certainly would make getting tires in the temp windows much easier. Run it for practice, set pressures, and not have to play the guessing games.

I’d say wear is somewhat similar to others under the tent from a couple weeks ago. I’m definitely wearing the inner edge more than others and a bit more feathering. So I know I’m sliding the rears a bit more than other drivers. So working on that combo of setup and driving. But these past couple practice days back at my home track has really exaggerated the wear.

I made a really cheap tire temp gauge by using the MyChron on Amazon and use a marker pen to write down tire temp on the tires.

Are you just using the EGT port on the MyChron and plugging that sensor in?

Yes. It has to be the EGT input though because of the K type thermocouple. If you need to get to it quickly, put the thermocouple and market pen in your driving suit. I think it would give you and idea of tire temps. Relative temps across the tire is also some what informative. Hey for $34, it will at least provide some nerd entertainment.

Oh wow my grammar was poor in my previous post. Let me restate: I was able to buy the thermocouple (link provided) on Amazon and just plug into my MyChron’s EGT.

Well, I hit the track yesterday after flipping the set above, no setup changes. Not as hot, but still pretty warm out high 90s to low 100s. Bumped up the hot pressures all the way around by 1psi and it seemed to cure the blistering on the inner edge. I think it was just too low, the inner edge was rolling over, and the added friction was blistering the rubber.

Finally some nice even wear on a set. No flipping needed. About 150laps, still had some life, but they have been heat cycled one too many times.

Did see some weird wear on the RF tire on a clockwise track. Outside shoulder has some “blistering” or weird groove in it. Hard to capture on camera. 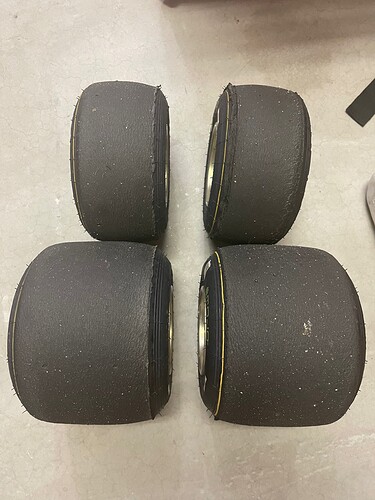 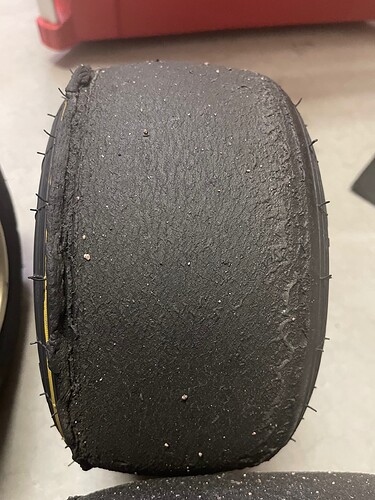 Looks like build-up from dragging the front tire slightly. Fairly common if you’ve got some corners or a layout that doesn’t clean that tire up every lap.

Yea it’s basically not used. Only 2 real left handers. Really hard to capture but there is nearly a groove worn into the shoulder. 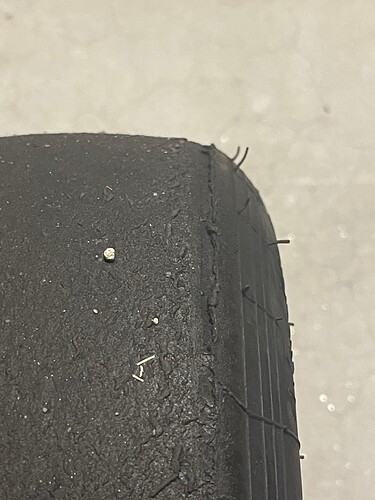 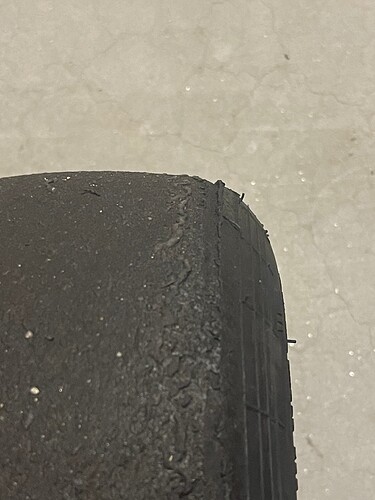