I’m new to karting and recently purchased a K&K LO206 kart. Did a lot of test and tune sessions over the winter. On our first spring track session the kart had intermittent brake failure. The brakes worked fine 99% of the time. On two occasions coming hot into a corner, the pedal bottomed out with complete loss of pressure. Swapped out calipers, bled the system, and tested again. Same issue. Brakes work perfect then randomly bottom out with no pressure. I’m going to swap in a new master as I suspect it is a blown seal in the master. The randomness if it is really confusing. Anyone experience anything like this or have any suggestions? 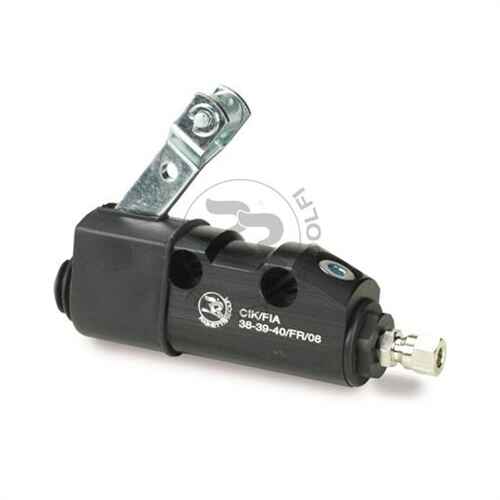 I would suggest replacing all the seals throughout the master cylinder first as that is the only thing you haven’t replaced yet. It sounds like air is getting in somehow so you just have to find where that is. Others may have better suggestions, but I would start by replacing the master seals and if that still doesn’t fix the issue maybe consider getting a whole new one.

Random loss of pressure but no visible leaks. That’s an interesting one. Is it possible the axle is sliding around in the axle bearings and overheating the rotor/pads?

Usually that wouldn’t quite make the pedal go to the floor, but stranger things have happened.

A seal kit should be readily available for that brake system I would imagine. For finding leaks, sometimes the caliper seals leak just enough behind the pad to lose pressure, but you won’t see a leak unless you remove the pad. Another place is the master cylinder in front of the piston, behind the dust cap.

Lastly, you could have a pinhole in a line somewhere.

Sometimes you can locate a leak by holding pressure on the brakes overnight. You could try a ratchet strap to keep pressure on the pedal while you wiggle the brake lines around and see if you find a leak.

No experience with this so take it with a grain of salt, but it may not be something with the hydraulics, as hydraulics dont tend to be random and as drastic. Maybe its something like the break rod, or maybe pedal, or caliper, or axle.

I have never had this issue, but it sounds concerning for sure. What system do you use for bleeding? I would want to make sure there is no air getting in the system or is trapped in the system. What fluid are you using? If you were to rebleed the brakes do you get air bubbles. The fact that it randomly bottoms out but other times is firm is perplexing. If a seal was bad on the MC I think you would have no firmness in the pedal ever.

With a single piston master cylinder setup, it is possible you have a small tear in one of the seals on the piston. During it’s back and forth motion, the tear could be moving and allowing fluid to leak by and the system to not hold pressure. Pump the brakes a few times and the tear flips back into position and seal up again. Pull the dust boot off the front of the caliper and see if it is wet inside. If it is, that is your answer. Replace the seals.

I ordered a new master and plan to rebuild the old one. Like you mention, its the only thing that isn’t new. I hate trial by part, but in this case its pretty easy.

I appreciate all the advice. Its is a simple system which is why it is so weird.

I suspect a situation like GregF mentioned where the seal in the master is torn or worn and is randomly failing. I initially ruled that out because it would usually be a consistent failure but there aren’t too many alternatives. Under the master boot is pretty grimy so its hard to tell if its old lubricant someone sprayed in there or brake fluid. I’ll reinspect tomorrow.

I’ve ruled out air in the system because the brakes work fine 99% of the time and the pedal is consistent and solid. I gravity bled the brakes which isn’t ideal but I’m pretty confident, based on pedal feel that there is no air in the system. I set up a bleeding reservoir as the master doesn’t have one. I’m using DOT 4 fluid which should be correct for my equipment.

Initially I thought we had a boiling problem as a result of the axle shift James mentioned. Our caliper/rotor gap was really tight and guys at the track recommended we open the gap. However, I swapped out calipers and widened the gap with no change in condition. The failure is independent of heat as the calipers were barely warm right after a failure episode.

There are also no visible leaks and the pedals hold pressure with no fade at least for 5 minutes or so. I know leaks can be slow so I’ll cargo strap it and reverify.

Tomorrow I’m going to reinspect the cables, pedal, and rule out other non-hydraulic parts. The sudden failure almost seems like its mechanical like Elias mentions but there isn’t much that can go wrong there. Definitely worth a second look.

New Master will be here in a couple of days so I plan to rebuild the old one and will hopefully identify the problem.

Hoping to race on Sunday so I need solve this quick.

I do not know what you are actually feeling, besides no brakes. I once, back before plastic bumpers, hit someone who was spinning. Next corner I pressed the brakes and there was nothing. I would swear pedal went to floor. Instead it actually went forward a little and hit the now bent bumper which kept the pedal from going far enough to actually work. So could there be a mechanical interference that bounces around resulting in interference.

Best of luck, only reason I said could be mechanical is because one race my engine would randomly die at this one corner during the first lap. replaced the entire carb, spark plug etc, same problem. Turns out theres a bump in the track that moved part of the throttle cable, making it automatically go full throttle and bogged dead.
Maybe tug and rattle parts while trying the brakes and see if anything happens? again, no experience here, just a kid who likes cars

There is no reason to put lube of any kind in behind the dust cap. Lube attracts dirt and dirt binds things up and cuts into seals. You want it as clean and dry as possible. As the piston moves, the brake fluid will lubricate it well enough. If you found cruddy goop, then that is your answer. The seals are bad. If you need more proof, spray it out with brake clean, blow it dry with an air gun and recheck it after a session that the brake pedal fades. If its wet, you have your confirmation. A new master is a quick fix, but replacing seals only takes a few more minutes than replacing and re-bleeding the system. It’s your money, spend it how you want.

I had a similar issue with my old ass 15 years old Intrepid. After 5 practice laps before the qualifying, all of sudden, brake is not building up pressure once moved to the stand. All I did is just blend the system 2-3 time, pressure came back. It is probably not the problem you have, but just blending seem to help and get me to the qualify.

I’ve seen axle shift cause brake issues. The situation I had was the set screws backed out but didn’t fall out. It’d let the axle shift during cornering, which shifts the rotor to one side. Since it’s towards one side the other side brake piston doesn’t have enough travel to make contact with the rotor. Sometimes the axle will shift back to the center and you’ll have normal brake pressure.

Rental brakes weren’t hydraulic so no caliper issues. Actually we didn’t have much in the way of brakes, come to think of it…

Unfortunately I would need two hands to count how many times I’ve had this happen. Go into a left, all of a sudden you have no brakes. Turn right and they come back as the axles moves back into the range of the pads.

No, it’s not normal. You definitely don’t want the axle shifting while you’re driving.

Thanks. That’s what I thought but I never lost control and it set itself back each time. Was odd though.

Usually when we’re talking about axle shifting it’s a lateral shift, side to side.

Sounds like what you had in the rental was maybe a loose hub/worn keyway on the brake disk, or maybe both

Thanks. Yeah definitely not a lateral shift, vertical. A bit unnerving!

Unfortunately I would need two hands to count how many times I’ve had this happen. Go into a left, all of a sudden you have no brakes. Turn right and they come back as the axles moves back into the range of the pads.

It’s not exactly a nice feeling. I think most of the time it happens right after an axle change and the set screws haven’t really found their happy place yet.

I’ve had that happen on rentals too. I think that’s from worn out bearings. They’ll get “up/down” free play in them rather than “side/side”. Hit the brakes and the axle wants to shift rearward as the chassis shifts forward. Also when you hit bumps it’ll feel like it’s jumping.

That sounds exactly like it feels. Bingo. I wondered if there was play in the cassettes that holds the axle. Worn bearings make sense. I think these karts are 10+ years old now.