Caged Kart - Need Help with turn in and hopping on exit

I am running a 2004 Margay Brava with a KT100 for a kart race that my school puts on. For this particular race we have to run a cage that adds about 20-30 lbs to the kart and I am currently running at about 375 lbs. The track we run is very tight and also pretty grippy, but not newly paved grippy. I would like to know if I should spend the money to convert my kart to use a 50mm supersoft axle (I’ve been looking at the CRG S20), or if I should just go with the soft 40mm Margay axle. I am willing to put the money into whichever will most likely be the absolute fastest choice.

I have yet to try other axles besides the Margay medium axle, but with this axle I tend to get less turn in than is desirable and quite a bit of hop when I load up weight on it in tight corners.

As far as 40mm vs. 50mm, it’s not really worth it to swap the components over. We have a huge discussion on one of our other forum posts about axles

This definatley worth more discussion. It is great to see you guy’s have a good handle on material elastic/ plastic characteristics. This could also segway nicely into a discussion on axle stiffeness vs hardness as the stress-strain diagrams play there part in explaining soft axles dont flex more than hard axles of a same thickness…I know this statement will stir some emotions Engineer waiting for robust discussion…

Also, for the PGP, I wouldn’t be that worried about outright speed. It is an endurance race, so consistency is going to be a lot more important than outright speed.

What school are you entering from for the race?

Thanks! I wasn’t sure if with the extra weight it would be something I really should invest in. And I’m from one of the fraternities at the main campus (West Lafayette).

Hmmm, I’m not sure if we can apply any kind of “traditional” axle theory here… Reason being that although you’ve added 40lbs to the kart, it’s also mounted up pretty high, has quite a bit of leverage and will increase lateral load transfer more than one would typically expect vs just piling 40lbs of lead on there.

Overall, I’m with @Aaron_Hachmeister_13 though. The money you’d spend on the axle assembly would probably be better spent elsewhere to get more performance, or consistency over laps.

I tend to get less turn in than is desirable

For this you want to look at things other than your axle setup. F/R weight and steering geometry (esp caster) are places to look into for this. Look at widening front track width also as too much caster can be hard on your tires, bad for an endurance race.

Widening the rear track may help with this. You could also try changing the rear ride height (or dropping the seat), we don’t typically do this, but again, since you have a cage hanging out of this thing, taking a reasonable swing at some unconventional things might be worth looking at.

It’s nearly impossible to tell over the internet, but I have a sense that adding a little jack on the front and widening the rear will help overall.

Oh nice! Alex Kardashian just started going to the main campus too, I was wondering if he’d be running in the race as well.

Like James said, you’re adding a huge lever arm with the roll cage. I would try raising the rear axle and/or rolling back the seat to bring that CoG down as much as you can.

For turn in, you could run a stiffer bar, wider front track, or higher caster. Personally, I would try them in that order but that’s just my preference.

In the mid corner, James got it with the rear track. If it’s really bad, taking ackerman out of the kart -I think that’s what I’m saying, putting the tie rods closer to the steering column- should help as well. It would keep the inside rear off the ground more, but it will also require you to turn more with your hands to get the same turn in, so it’ll feel weird at first.

I was thinking about making a custom torsion bar for the front out of steel as opposed to the stock aluminum one as I know the Young’s modulus of aluminum is about 70 GPa while steel is over 200 GPa. I was also looking at possibly trying to get molybdenum rod stock, but I’m afraid that’s going to end up being really expensive. Any ideas on cheaper materials that are stiffer than steel?

Aluminum bar, or clamp? Is there flex occurring that you can measure or validate?

It’s a billet aluminum bar that connects the front of the frame (spindle to spindle) and overall adds front end grip. It is a blade design connected by clamps (which I believe are also aluminum) and we have tested both positions and the torsion bar out and have noticed very significant increase in front end grip with the bar in the stiff position as opposed to soft or out…

No doubt bar out vs in will have an effect. My question is more… in practice will steel make a difference in rigidity vs alum on the kart.

I’m inclined to say stand the bar up and focus on geometry.

Have you tried standing the blade vertically? (EDIT: wow I totally missed the last part of your post there, duh. Ignore this part of my post) OTK supplies a blade from factory with their models, and horizontally it’s the softest bar they offer, but vertically it’s the stiffest, so I would guess the same applies to the Margay bar.

You could try making a stiffer bar from steel and that might work, but I’d try other tuning options before you attempt that

Currently, I do stand the blade vertically. My theory is that since steel is about 3X as rigid as aluminum, having a solid bar that is the same height (diameter) as the blade on the billet aluminum bar would make the front 3X as stiff. Of course, everything always works out better in theory than in reality, but I’ve seen crazier things on these karts. A lot of guys are running magnesium wheels in the front and spun aluminum wheels in the rear just to get more bite on the front than the back. Also, it’s only like $10 for a solid rod of 1018 steel in the same diameter so I figure I might as well try it and see.

I’m all for new ideas to tune a kart, so I’m interested in how this goes. It makes sense in theory but like you said, things don’t always work out as wellong as they look on paper

I’ll let you know how it goes

If you are trying to stiffen the front you could try something I’ve been thinking off but haven’t got near a kart to try yet.

Put a d-ring around the lower lug of each stub axle C. Loop steel strap through each d-ring and connect them together using a turnbuckle or two. 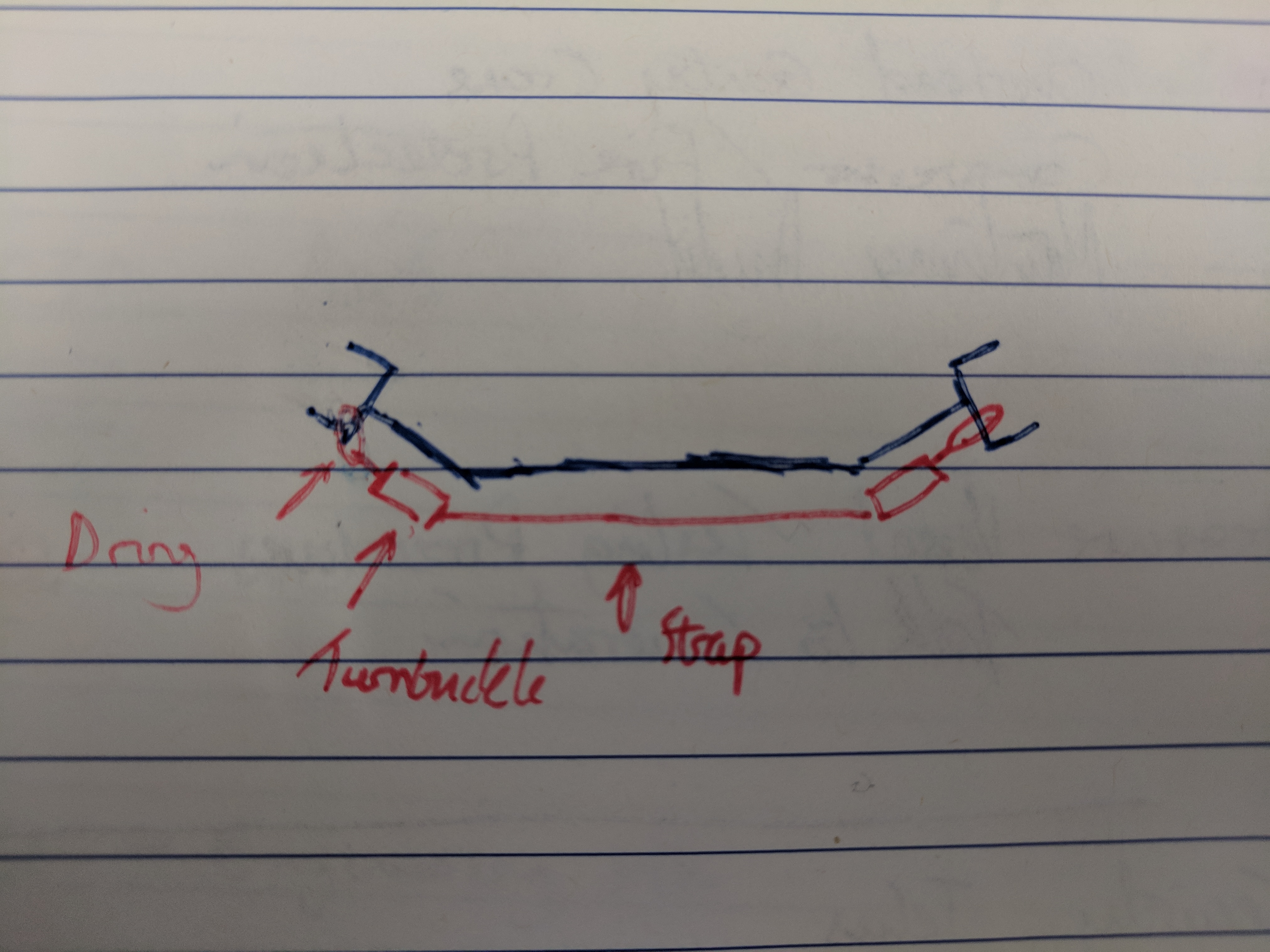 Tighten the turnbuckles to determine the stiffness you want.

My theory here is by running the strap below when you initiate the weight transfer to the outside wheel flexing the chassis upwards, it will actually pull the inside wheel down. It effectively shares the load making more use of the tires ultimate grip. In theory it should have a similar effect to the roll element of FRICs that F1 teams were banned from using a few years ago.

Thanks for the idea! I’ll definitely give it a try so long as the rules allow it (which I’m pretty sure there’s nothing that says I can’t). I’ll let you know how it works. I need all the stiffness I can get in my front end. I had also thought of trying to connect floorpan mounting points with a steel bar under the floorpan, but this seems like it would be much more effective as it put the grip closer to the tires.

I imagine a lot of the remaining flex is going to be from the C plates themselves, especially after you put a whopper piece of steel across there.

I have yet to try other axles besides the Margay medium axle, but with this axle I tend to get less turn in than is desirable and quite a bit of hop when I load up weight on it in tight corners.

Your final sentence is the clue to what is happening. The hop in the corners is usually indicative of not lifting the inside rear enough and the tires are fighting between wanting to make the kart go straight (the rears) and turn (the fronts). As a quick experiment, try leaning “out” when you get to a corner it hops in. This will help pick up the inside rear and free the kart up. If this makes a difference, you’l know where your problem is.

A more permanent solution can be seat struts from the upper part of the seat to the bearing hanger on the side of the kart that is on the inside of the corner. Seat struts work mainly by putting a direct pulling path between the main mass (driver) and the chassis. Go soft on any rear adjustable bars or leave them out completely. The front bars will mainly change how the kart feels on turn in, as in how “crisp” the kart feels. Ultimate grip will only change a little. You could also move the seat a little more forward too. Getting the kart to pick up the inside rear quickly and keep it up will help the turn in more than anything else.