How are we able to tell how soft or hard a chassis is? Take peoples word? Thickness of chassis?

To what end? I mean, why does it matter?

Different brands are known to have their own different softness/hardness and therefore their own tuning guides. Thickness of tubing isn’t really relevant so much - a chassis could be made from the thickest non-annealed tubing ever and be soft as shi%#, conversely a thin wall age hardened annealed chassis might be stiff as a board. But both will be tunable in different ways.

Tubing thickness is one indicator but the frame design, material used, and heat treating methods are just as important. It’s hard to say what defines a soft vs. stiff chassis, unless you drive it and can feel the difference.

It’s a useful thing to know for setups as you said. Also people make claims like “chassis a works good with engine b” or “tyre a works with chassis d”. Now most likely these are rubbish claims and it’s more dependant on setup, driver, and engine.

You can’t, because the manufacturer won’t tell you.

They all say they use 4130 chromoly steel, either annealed, normalised or cold finished and stress relieved (soft, medium and hard). Then geometry. Then dimensions, which are more important, most use 30x2mm officially (2mm wall thickness is the legal minimum in fia karting racing) with some using 32x2mm. Some occasionally use 28mm and some occasionally use less than 2mm wall thickness.

4130 chromoly is seamless and the control over the thickness isn’t fantastic. This is the probably the key difference between “good” and “bad” frames and to some extent, manufacturers. Manufacturers pay more for good control.

All conjecture of course

Also different parts of the chassis are different softness/hardness.

The only way to really know is cut the thing up and send to a metallurgist. That’s basically what a lot of small manufacturers do when they design their own products.

Might not be able to make any sense of it across brands as geometry plays such a role. But among a single brand like our Nitro Karts, the chassis come in 3 stiffnesses. The tube thickness is what changes. The thinner tube karts are generally best at high grip events like SKUSA. The stiffer chassis are better at low grip events like CKNA or club stuff.

Jim, How do you tell the difference between those karts? Serial numbers?

You kinda have to take peoples word for it. There’s no empirical measurement that I have seen. It would need to show spring and rebound I think to be useful.

What adds to the confusion is that sidewall tire stiffness is a big variable too.

There’s no empirical measurement that I have seen. It would need to show spring and rebound I think to be useful.

Right, and as @Alan_Dove mentioned, there could be varying metal compositions from tube to tube on a single frame. To really know what’s going on, you’d be testing every bar.

I’m pretty confident that metal composition makes almost no difference (assuming consistency). I think thats a myth perpretrated by manufacturers to sell karts and stop others making them. Treatment makes a little difference. Geometry and dimensions are the key.

My thought is that you could have some sort of standardized testing. Something like a shock dyno that measures bound/rebound. Numbers for lateral, horizontal, longitudinal and diagonal.

Torsional rigidity is thing for automotive design. Clamp down one end and one side of the opposite end and load up the “free” / unrestrained corner, measure force applied and resultant displacement.

Relatively repeatable across different chassis for the sake of comparison.

There is a general rule that we don’t want to buy chassis more than x years old.

Part of that is parts availability.

What part of this is due to metal getting tired over time? Presumably there is a good reason top racers change chassis every race. It may just be that they can sell it easily so it makes more sense to have consistent chassis behavior.

This has been discussed in various side-bars in other topics a lot, but while I think it’s true that a kart might have altered metal characteristics after a certain amount of racing on it, that doesn’t necessarily equate to poor performance of the chassis.

The constant “will my OTK be fast after 5 races or is it worn out?” questions come to mind. Yes, your kart will be fine after a season or two of racing on it. No it will not wear out.

Karts sag, get scraped up on the bottom, but most of the time, that isn’t going to drastically affect performance. Unless the scraping damage is bad.

As I’ve mentioned numerous times of the years… examples being Rogero running upfront in Tony Karts that had 4+ seasons of national racing on them, Nekeel being ballistic fast at Rotax Grands on a well-used Tony Kart roller he bought for $900 on the Friday of the event, or even myself running my well-used 2016 Exprit at SuperNats in 2018 and being upfront all week and having the fastest kart on the track in the final.

Presumably there is a good reason top racers change chassis every race. It may just be that they can sell it easily so it makes more sense to have consistent chassis behavior.

I think this is less common than perceived. The guys with money swap chassis often, but that Venn diagram doesn’t necessarily overlap with the “top guys”

In my last X30 races in 2019, I changed from a 2016 OTK that had over 2 years of use on it, to a brand new, out-of-the-box OTK in the middle of the weekend, and there was no difference in feel, lap time, or tuning capabilities.

Some karts may last less or more depending on construction or materials used. My ART GP with the “special material” the factory guys were using, lasted less than a season before it started to sag and not respond to changes. But that wasn’t the kart the public was getting. But it’s conceivable that certain chassis will “flex out” sooner than others.

For the most part, I think it would take a few years for most karts to see any difference in feel or measurable deflection.

Technically speaking we’re talking about plastic deformation of the metal. This doesn’t effect torsional rigidity surprisingly. What it does do is effect the geometry. Commonly it’s referred to as “sag”.

There are studies out there if you google hard enough.

Here’s a fish bone from one them: 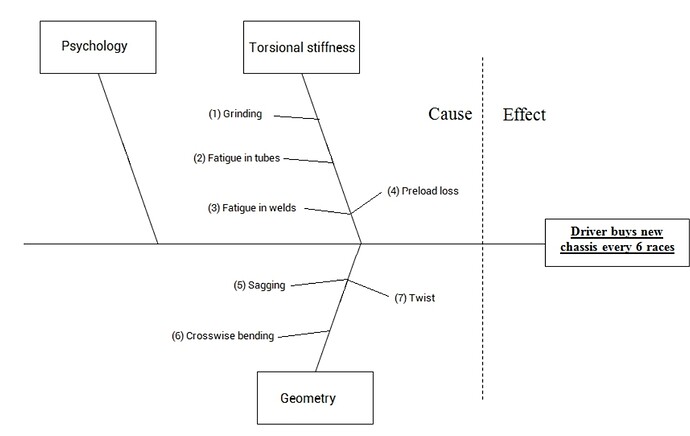 Or for fun, do it in software and validate with real life testing. 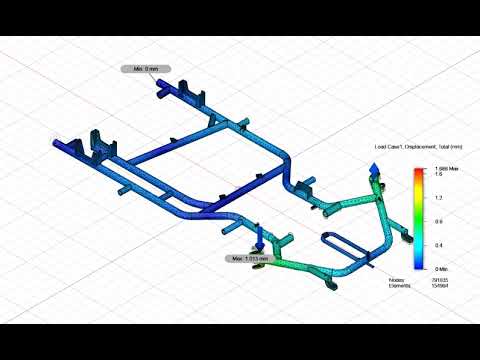 Cause: psychology
Effect: buy new chassis every other race.

@NikG is that video indicating that most chassis sag is coming from the front end? I cant quite read what the scale is on the side.

I have a question related to this topic.

People have been telling me that OTK chassis react considerably differently to tuning as it relates to flex and grip. What I’ve been told is (as far as chassis tuning is concerned) they are kind of their own beast.

Any validity to a stament like like? Are there that distinct of a variances from a chassis tuning/ chassis behavior perspective?

Any truth to that?