Anyone using clamp on struts? The factory seat struts on my Arrow kept cracking, and were very close to my chain, so I chopped them off and used some bolt ons. At the time, I was using the chassis to just have fun on my buddy’s backyard dirt track, but since then, I’m converting it back to race sprint races. I don’t really like how they clamp on, as you can bend the hell out of the brackets and clamp.

I have the two struts mounted in the same general vicinity of the factory struts, but i’m considering putting one in the middle/back of seat. or running struts out to my bearing housings or whatever they are technically called. i’ll obviously need to test it out. Anyone else out there in a similar situation? how did it hold up? the extra strut right in the middle/back of the seat held up well in the dirt, but i’m wondering if it will make the kart too stiff for the asphalt.

I did a race with a clamp after the strut broke in quali and I believe I got 3rd. It was just a temp fix tho. We re-welded. It broke again and I bought a new frame. The clamp did a fine job.

Aren’t some of the margay karts exclusive clamped seat supports?

And Factory Karts (Musgraves kart out of California) has a totally different solution, similar to IKart.

If you don’t feel comfortable with it add some seat stays.

I’ve seen some Coyote’s but no real luck finding any setup guide or literature.

This is how I had it setup for playing around on the dirt, for the asphalt I have the support by the chain flipped around angled towards the motor and am debating putting in the one in the middle.

Check out the Margay (one level above) the Ignite I believe. Think the newest model that has that super slick dark red pearl paint has bolt on seat struts.

I’m not sure I’ve ever seen anyone put a seat strut in the center of the rear of the seat.

Generally you’re doing to probably want them on either side of the seat, as one of the main functions of them other than holding the seat in the kart, is to transfer weight and load through the frame to make the kart unload the inside rear wheel. A strut on the back of the seat isn’t going to do that, it’ll be trying to tug on the center rail there instead.

I’m amazed at how those seat stays and struts affect the handling. Last weekend before the main, the small diameter tube (the curvy one) on my OTK, which stiffens the right seat stay broke at the weld on the rear cross brace. My work around was to use a 2nd seat strut on the right side to minimize flexing of right seat stay. But in the main, the kart felt “skatey”, as if the outside rear tire had lost some side bite and the kart lost 3 or 4 tenths. The curvy tube probably broke during practice or race day, I just didn’t find until the Main.

I’m gonna test things out this Saturday. Going to start with just the straight up and down bolt on’s. If it sucks I’ll throw on the extra supports out to the bearings.

Our Margay K3s have adjustable seat braces that clamp to the frame.

I “convert” 2 cycle chassis into 4 stroke chassis by carefully cutting the welded seat struts… I use a good Reghitti or Wild kart clamp and they sure are way better from the clamp on seat struts of the 90’s- no comparison!… the really amazing thing is they always clamp on between the two welds normally found on the welded seat strut on the engine side of thechassis… if needed I’ll open up the seat strut on the non engine side but try not to… check out my sons You Tube channel Race Nutz for videos of: how to, the final product and his countless wins using this “conversion” technique… the trick is to place these straight clamp on the chassis where the old crooked obstructive ones ones were… you get about an inch to an inch and have of clearance just using a straight clamp on seat strut and most of the time that’s all you need… also use a good PMI slider motor mount or the much larger Odenthal (not my personal preference) will make it a perfect match…

Thanks for the feedback, I’ll check it out.

Used this brand when I broke the seat stays at etown. Got 3rd. Kart felt surprisingly fine: 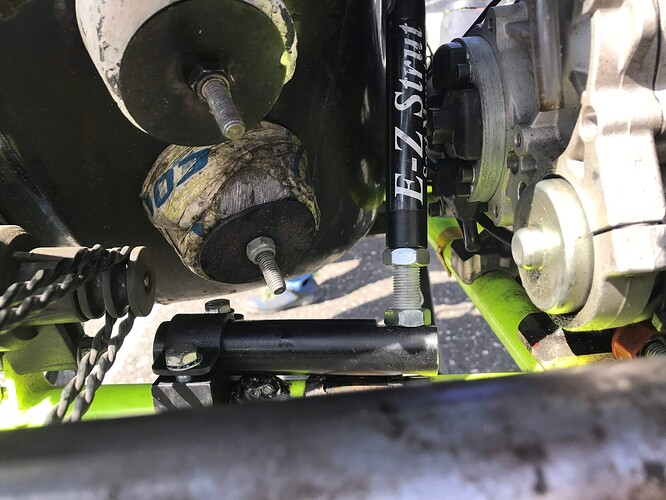