Hello all, first off I am new around here and new to the care of 2 stroke engines…

I have a 1999 CR125 that died suddenly while on track. Seemed like an ignition problem so I have been concentrating on that but no luck so far and I’m getting desperate.

In a rough chronological order here is what I have tried:

At this point it now will sputter and cough and run for maybe 1/2 of a second (rather than totally dead before replacing the coil). However, it still will not start. Anything else I’m missing? Thanks in advance!

Could it be that the plug is simply fouled? Even if the plug is getting spark, it could be too wet to fully fire the engine?

So it just died suddenly on the track? Some other things to look at…

Thanks for the reply! I’ll have to take a look at those as soon as I’m home on Monday night. The silencer looked ok when shining a flashlight in it but I haven’t pulled the expansion chamber off yet.

I’ll see if I can find leaks. It sounds and feels normal when I turn the engine slow or fast. I do have a pumparound system and am going to try rebuilding the pump even though fuel seems to be flowing like normal during cranking, it’s due for it anyway. The pulse line did seem to be getting some fuel in it which I think is bad… I will report back once I’m home and mess with it some more!

Well I found it… I’m still not sure what failed first but the piston has a gouge on the side and it appears the base gasket is blown?? It was not wet inside like this when I replaced the head gasket… did my brand new head gasket also fail before I even got the engine to start? It’s too late to continue tonight but will update again after I can investigate further. I had just done a full top end rebuild before the practice day and only had 4 short sessions on it when it blew up… 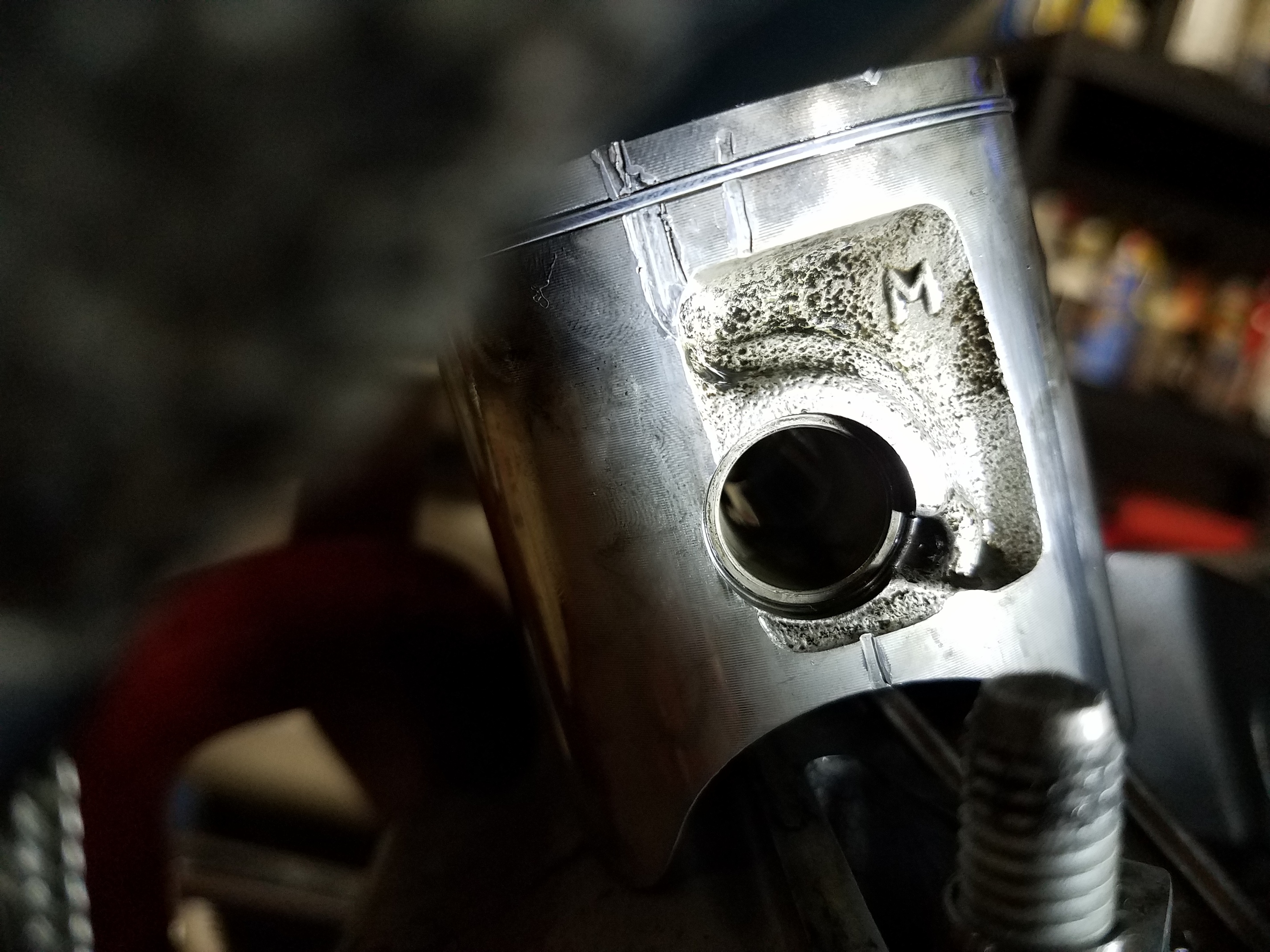 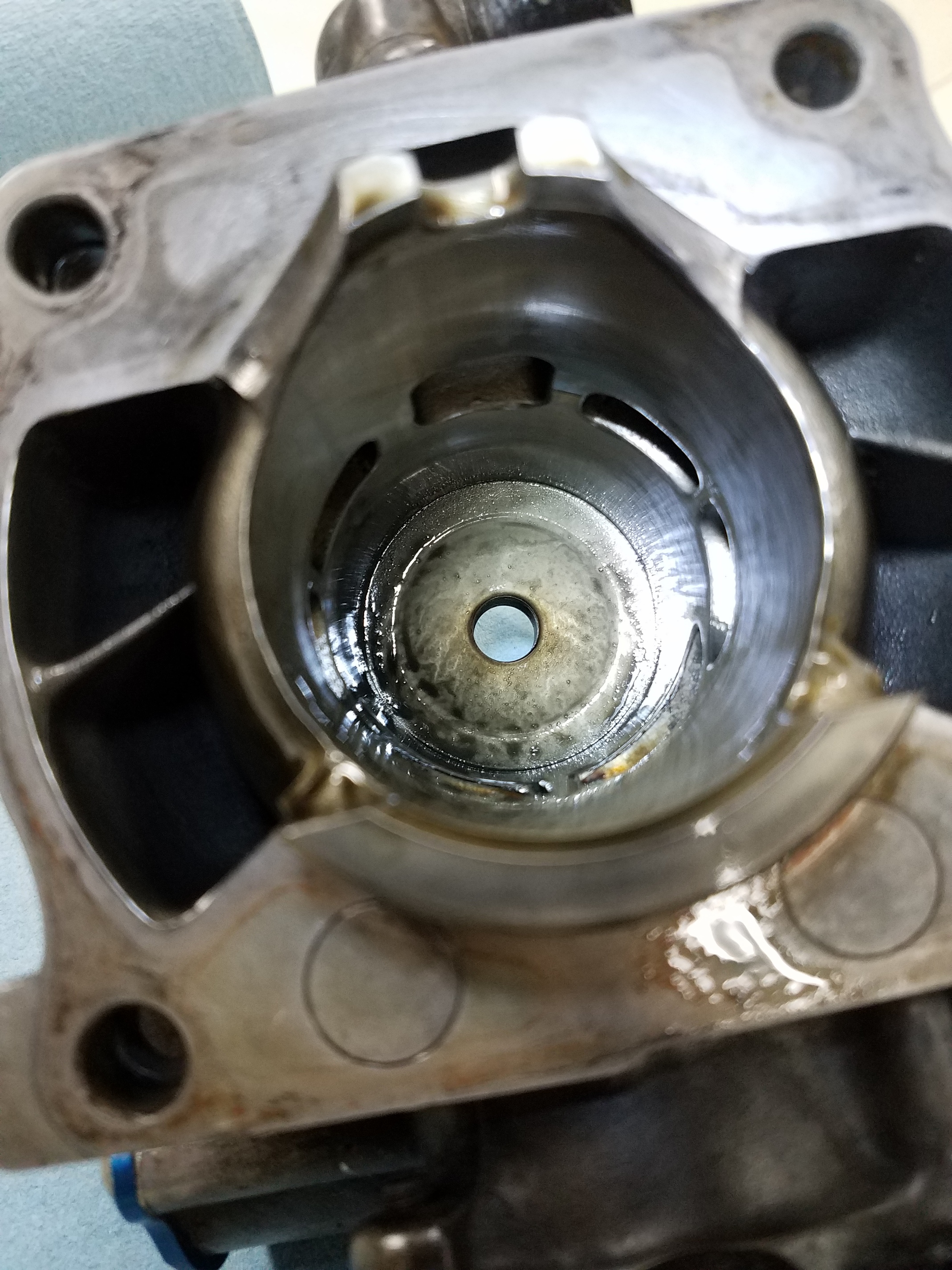 My quick guess is you might have lost a circlip on the piston.

I figured I would give an update since I have it running fine again finally. Basically the new piston arrived with some sort of crusties stuck on it in the recessed areas on the sides (from the casting process I assume). When those came off they caused the damage. Should have cleaned off the new piston but only have seen 1 other with crud on it out of the box. My more experienced buddy thought it was pretty unusual to need to prep a brand new OEM Honda piston!

Moral of the story seems to be that when it’s got spark I need to just pull the jug/everything apart and look around, I’m to used to cars where the equivalent is a big deal!

Ok a final update after this weekend’s racing! The piston was certainly damaged but I finally found what caused it to stall out on track in the first place! The E-clip on the carb needle broke and jammed inside the slide, flooding out the engine. When I got it to the track again I quickly discovered it was still not running right and with the help of some other karters we figured out it had to be the carb (kart was stalling out after big throttle blips on the stand). I pulled the carb apart (again) and found the needle had finally fallen out so the issue was obvious (this time). The organizers even let me race in a different class (125 open shifter instead of stock Honda) since I had missed my race while investigating. I learned a lot about the engine/carb/ignition system through all of this so I’m not even mad!

If the retainer/cable holder that screws into the slide is wore out that clip will break regularly. There are some Yamaha parts available that will fix that issue and apply spring pressure to the clip, keeping the needle from moving around.

Thanks for coming back and report what happened. That sucks that such a small part caused a problem. It does explain the damage to the piston in a way because even though I thought maybe piston clip, really the indented spots looked too shallow.

Interesting, my retainer/cable holder looked ok besides the broken E-clip but I will look into a better long term fix, thanks! I always hate it when I find a forum post where the OP never reported back what the “solution” was haha so I always try to.