The “balance factor” is at best a compromise, and partially suppresses vibration at some RPM and power/vacuum levels.

Classifying the connecting rod’s upper and lower halves as “reciprocating” or “rotating” is not completely accurate. The rod’s pin eye does reciprocate, but the rod’s absolute upper end (including the material closing the top of the eye), and the rod beam between the pin eye and the crankshaft’s rod journal follow different and more complex paths. The rod’s big end does rotate, but only the imaginary line marking the contact with the crankshaft’s rod journal is “pure” rotation, the rod’s big end actually oscillates as well.

Mathematical-based formula using only conventional factors will never predict accurately how well a given engine will run, even at a given RPM, because the dynamic forces aren’t limited to reciprocating vs. rotating weight. The forces acting on the rod + crank-pin (mass inertia) are not only the reciprocating weight (as listed above), but also the forces present in the cylinder and combustion chamber above the piston.

No formula is “correct”, some just come closer than others, by the “empirical” method - they’ve been tried + adjusted by experiment.

The bottom line is that the physics and mathematics involved in how the engine operates are far too complex to make a formula-based balance factor any more than a reasonable compromise.

Some people still think that the balance factor is something other than a way of recording what you found to work by trial and error. All I have to say to them is let’s put your method to the test. Here’s two sets of data and you tell me what balance factors will work and I will tell you how far off you are using my crank balancing software (which agrees with real life experience in these two cases):
case #1:
piston assembly 122 grams
wrist pin 24 gm
con rod 133 gm
weight at the small end of con rod that statically balances the crank: 52 gm
top RPM 10,200

Sean responded and gave me a balance factor of .187 for the first one and .143 for the second one.
Look at this graphic which shows these two test cases on the left and what their balance would look like on the right if they were balanced using the balance factor. I can tell you from riding my bikes that what the graph says and what I experience are nearly exactly the same. The AX100 graph has 100% balance (where it crosses the zero line) a bit higher than I prefer now but that was back when I had the program set to balance it that way. At top RPM anything within 50 of the zero line is not felt hardly at all on a small engine. I think the main flaw using a balance factor is that there is no way to scale it for top RPM. I’m sure I could figure that all out but I’m not going to because I’ve already expended a lot of brain power getting this calculator to work just right. Any way the results here speak for themselves. Using balance factor is as hit and miss as throwing a dart trying to hit the bullseye. It’s just no good. 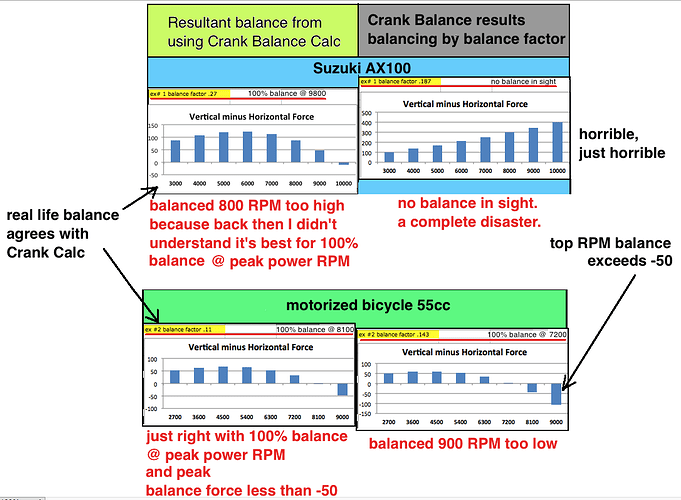 To read about my crank balancing spreadsheet go to www.dragonfly75.com/moto/crankbalance.html

What is the purpose? Are you designing an engine? Do you think you can improve upon what the OEM has done? Crank balancing is something you would really only worry about if you are dramatically changing the speed range the engine operates as.

Balancing rotors is simple, and needs no explanation here. Crank “balancing” is not really about balance. We are trying to counteract the forces caused by the acceleration and deceleration of the piston. To accomplish this this without the use of a counter balance shaft, the rotating assembly is deliberately “imbalanced” with a percentage of the reciprocating weight. The weight is place in the crank opposite the crank pin so that it generates a force in opposition to the piston’s inertia. It can only be partially successful because the piston will generate force only along the Y axis, while the imbalance in the rotating assembly will generate sinusoidal force in any reference plane (x being the most problematic). It can never be perfect. Things are further complicated by the fact that the forces at TDC and BDC don’t match. Because of rod angularity, the piston travels faster in the top 90 degrees of crank rotation than in the bottom, and that means that forces generated by the change of direction are greater at the top. Even if we could totally cancel one force, we wouldn’t match the one at the other end of the stroke.

Some years back there was a motor builder known to “push the gray edges of the rules”, who would increase the balance % on KT-100s by drilling and welding in Tungsten slugs, then welding them up. He eventually got caught. He mainly used this technique on road race motors…

Hmm, so you mean karting people don’t balance their cranks? Do all of the kart engines come with really good balance? I thought sometimes motocross engines were used for karting.

The Engine OEMs do a good job designing and machining their cranks. Have you actually put your hands on a modern kart engine crankshaft? What exactly are you going to improve? What do you think the OEM got wrong?

The machine work and modifications required to change balance factors in cranks are not allowed by the rules. Purpose built kart motors are very well designed for their application. If you started changing balance factors, you would at best make no gains, and more likely hurt performance and reliability.

I do not know why people think they are going to do better than the OEM. This is not 1960 where some guy experimenting in his garage is going to figure out a better way. The OEMs have been doing this day in and day out for 40+ years. Plus now they have the benefit of highly capable engineering simulation software. Things are highly optimized now. When you change something that is optimized, your are making it worse.

As for MX based engines, yes…karting applications do run the motors a bit higher in the RPM band than you would on the MX track. Maybe someone like Reine Persson could comment on whether they ever messed with balance factors in MX motors in the past. But under current rules, not allowed. For instance, SKUSA Rulebook “20.3.2.10. Crank, Rod, and Assembly: Must remain OEM with no
modifications allowed…”

There is a world outside of OEM engines that require crank rebalancing. In many kart engine classes it is not needed or even allowed but when you enter the world of classes that allow more open modifications it becomes very important. I have not used Michael Forrest’s software but crank simulation algorithms are definitely in use in many applications.

Just think of an open class where an engine is stroked. Or even a vintage kart engine where the OEM pistons are not available and you want to rebalance for a heavier or lighter piston.

Sounds like way more work that I ever want to do. And I am a Mech E that likes “projects”. I can think of a lot more interesting things to Engineer than kart motors for classes that no one runs, or vintage kart motors with no parts support. But to each his own. Have fun.