Have a out dated 08? CRG KT1 chassis with ven99 brakes. I’ve rebuilt the master and caliper, bleed with the proper tools and fluid but the system just sucks for TAG senior, its just to over worked for such class. So forward on.
I recently acquired a complete 2014 CRG KT1 besides the frame. I was hoping to incorporate the ven 05 brakes onto my chassis but quickly realized the cassettes are 4 bolt not 3 like my frame. Considering the caliper bracket bolts to the cassette and i cant use the 4 bolt cassette i think im screwed. So now after a little more searching i see the Ven04 uses a bracket that appears to bolt to 3 bolt cassettes. Im wondering can i get the ven04 caliper bracket and ven04 bearing cassette spacer and finally be able to bolt it all up?

If anybody has ven04 stuff id very much appreciate if i could get certain dimensions on the caliper bracket and cassette spacer holes. The only reason im trying to do this and not buy a new frame for the newer crg parts i acquired is because i simply do not have the money nor feel its worth it to spend $2,200+ on a new frame when im not going to be a front runner for awhile (im on a my09 leopard as it is compared to the x30 people)

If you know someone with a mill and maybe a lathe I’m sure you could make something that would work. My dad was able to get Ven05 front and rear brakes on an old BRM so I would think anything is possible.

Hopefully you don’t mind me questioning why you think the ven99 brakes suck for TAG senior. They were considered one of the best brake systems for similar classes (rotax, KF) and with the front brakes where considered market leading for the shifter classes.

What is making you think they suck, it may be easier to fix that problem then get the ven04 to fit?

Parts are coming obsolete, my bores are worn, my rotor is well used. The brake system is simply old and tired. Ven05 is arguable the best brake system on the market and since i have the system in hand i want to use it. As for using a mill and lathe i know nobody here in NJ, everyone i know is on long island NY. Im 99% sure i just need to get the ven04 caliper bracket and spacer.
Update: Comet kart sales go back to me to say they do not have the ven04 caliper bracket in stock and is no longer made. I been busy but will be searching around else where for one. I will update when i can.

I did find someone selling 3 newer crg frames that are ment for the complete (besides frame) parts that i picked up. Seller has been on vacation and awaiting to see his final prices plus shipping per frame. Worse case scenario i just update my frame sooner than i wanted to. Still need an X30 though if i want to get serious.

Update: Finally received my ven04 caliper bracket. Only place i could find it was in Italy and they were on vacation for awhile. I open the package and nope not going to work. Whoever it was that i asked about the ven04 caliper mounting spacing screwed me. It certainly is not 80mm apart, not even close. The good thing though is now i have a template that i can copy but make the mounting holes spaced further apart.
Im pretty busy but maybe able to fab a new bracket during the weekend. Either way im still going to need to order the cassette spacer. later on…hope i can at least get that in the states

I’m curious what your comment was about an '08. I have on '08 GP Racing chassis, which is actually CRG. It also has the 80mm spacing. That said, it’s just a 0.25" aluminum bracket with 5 holes in it. It should be fairly easy (and cheap) to make one with 4 holes for the cassette with 80mm spacing for the 2 caliper bolts. I assume it all looks something like this: 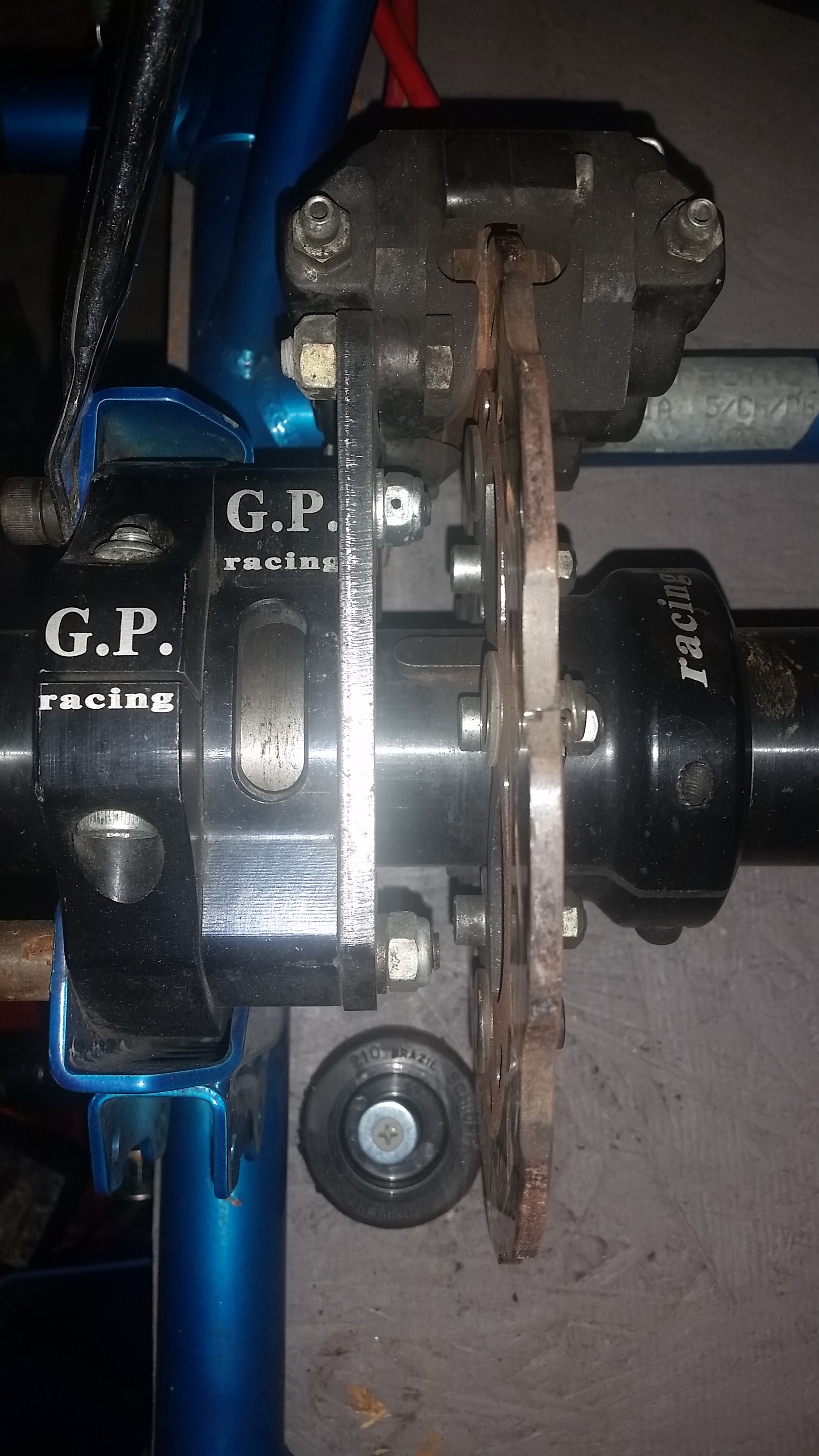 … Either way im still going to need to order the cassette spacer. later on…hope i can at least get that in the states…

If you are referring to a caliper spacer similar to the one Bryan Hall has pictured above, there might be a more available and cheaper option that could possibly work if you cannot locate this part.

CRG sells small spacers that fit each of the individual 3 holes (so you would need 3 of them). They are for the Ven05, so you might be apprehensive in trying to make a Ven05 part fit again, but I remember having a CRG chassis years ago that had Ven04 brakes, and I went with the 3 small spacers option and somehow made it work. And in the link below, you can see they come in two different sizes:

It might also seem a little inadequate to use three small spacers instead of a giant spacer that revolves around the entire axle, but a small spacers option is used frequently, as shown in this picture of a CKR kart with a Ven05 system: 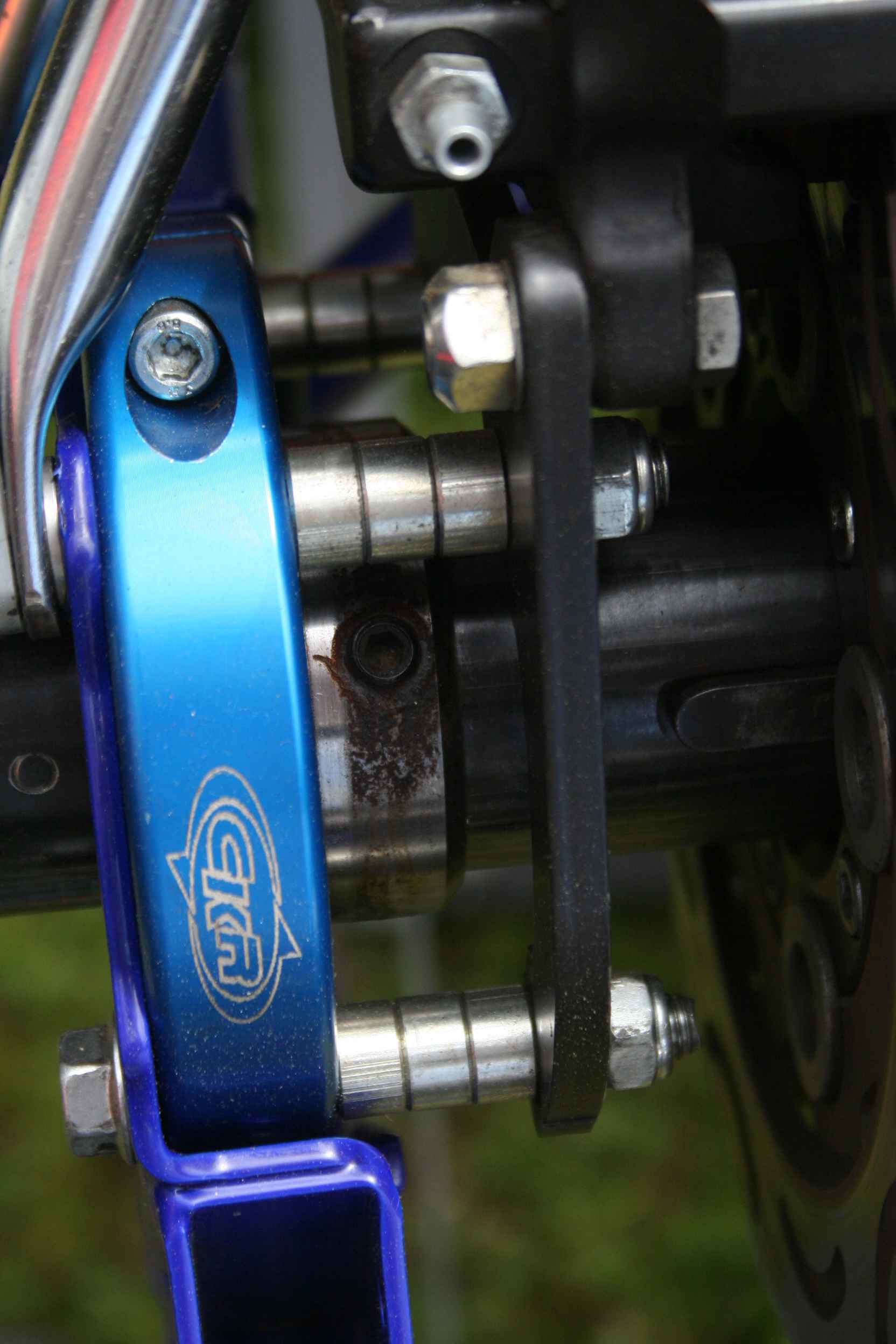 I really appreciate the insight. I dont understand why the ven04 caliper bracket i got would have roughly 60mm? spacing IF the ven04 caliper mounting holes are really 80mm apart. My cassettes are 3 hole and instead of buying the $80 cassette spacer like in Bryan halls picture i will just space it like Charles shows. I plan to fab up my own bracket this weekend. Next chance i get to practice is labor day so i have plenty of time.

Still have your VEN-99 front calipers? I have a VEN-91 system and am hoping VEN-99 calipers will drop in. Could you confirm some measurements? In fact, if they match, I’d be willing to buy yours if they are for sale. I don’t need racing stopping power, just calipers that don’t leak. 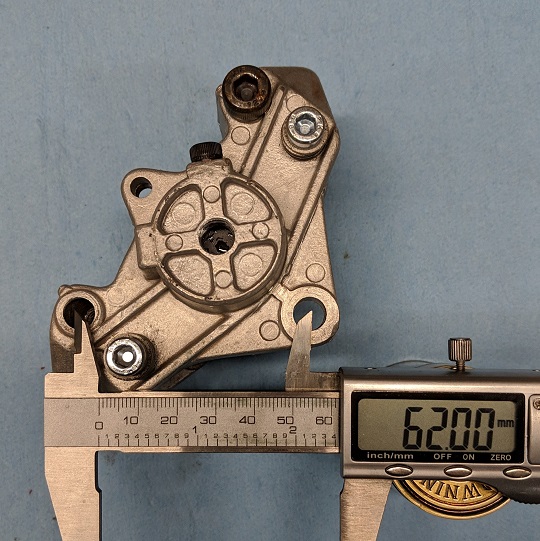 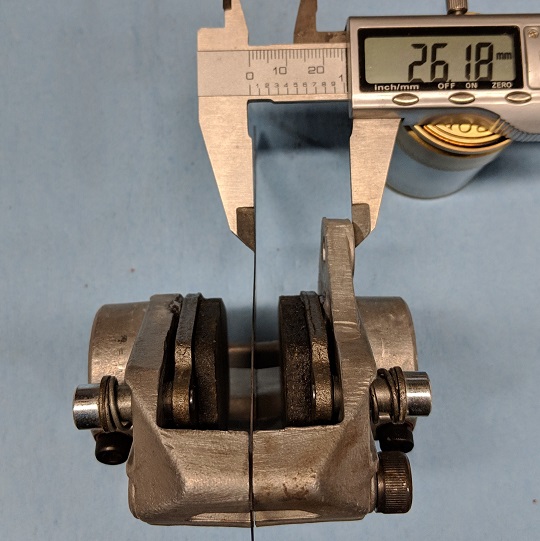 I was the one who wrote on your post saying i just sold my chassis that had ven99 brakes on it. Sorry i completely forgot the take the measurement of the spacing on my ven04 bracket today.