Electric Karting is not designed to replace Combustion Engines

In the future this will he referred to as “overclocking” the kart maybe.

hahaha thats funny. I wonder how long the rebuild intervals would be on electric karts

Zero I’d think. I assume these electric engines go till they fail. Overheating is likely an issue.

There’s definitely ways to tweak electric karts… but equally there’s ways to manage that too.

For the engine manufacturers, good question. In Rotax’s case they started with a bosch powertrain and then went on to develop their own, at least that’s what the verbiage says.

I’ll just leave this here and we can all imagine the potential. Electric motors are seriously wacky.

Electro-heads created some additional marketing for their program, so I’d figure I’d put this here (and probably make @Alan_Dove rage

dont get me started lol

What triggers me to be honest is the “path to F1” narrative for Karting. I’m so over it at this point.

It should obvious to anyone who spends any time in/around racing that money is the necessity in all things racing, whether climbing the “ladder”, or just running a season.

But that’s the thing. It’s not obvious.
So many people thing the road to F1 is ‘hopes and dreams’.

They rush along from series to series, often spending beyond their means, also in the ‘wrong places’ to achieve anything close to what they think they’re heading after.

So it’s not obvious to most people, at all.

The path to fitness is a good narrative too! It’s great exercise for all ages. It is always amazing to me how few people understand how
Physical karting is.

Serious question: how physical are the f1 cars? I assume given the downforce and that they can pull 5-8g, that it requires a lot of training and strength. But, is it as aerobic as karting where you pull 1.5-2.5g every 3-5s?

I can’t imagine a sprint kart race lasting as many laps as a formula 1 race, for example. It would be utterly brutal. But, I’ve seen footage of a famous racer in the 80s collapsing trying to push his formula car over the line, totally exhausted.

The only cars I’ve driven were no downforce and I was a noob so I have no perspective on what driving a formula car at speed is like.

But that’s the thing. It’s not obvious.
So many people thing the road to F1 is ‘hopes and dreams’.

They rush along from series to series, often spending beyond their means, also in the ‘wrong places’ to achieve anything close to what they think they’re heading after.

So it’s not obvious to most people, at all.

If nothing else, the drain on the bank account should trigger enlightenment. Unfortunately for some, that’s how learning works.

It’s worth noting that, even though money opens the door, it won’t deliver wins. Skill is needed, & that’s where kart experience can make the difference.

Tell that to Roy Nissany

What makes common sense on a forums, is way more complicated in real life when people are chasing after a dream.

But, that’s a conversation for another day, and another thread.

"These sessions are priced at £125 ($160). These can be for children who are new to karting or for experienced drivers who just want to try out the E- karts and see what they can do!

The Spark Tasters will include a warm up, followed by 3 sessions. " 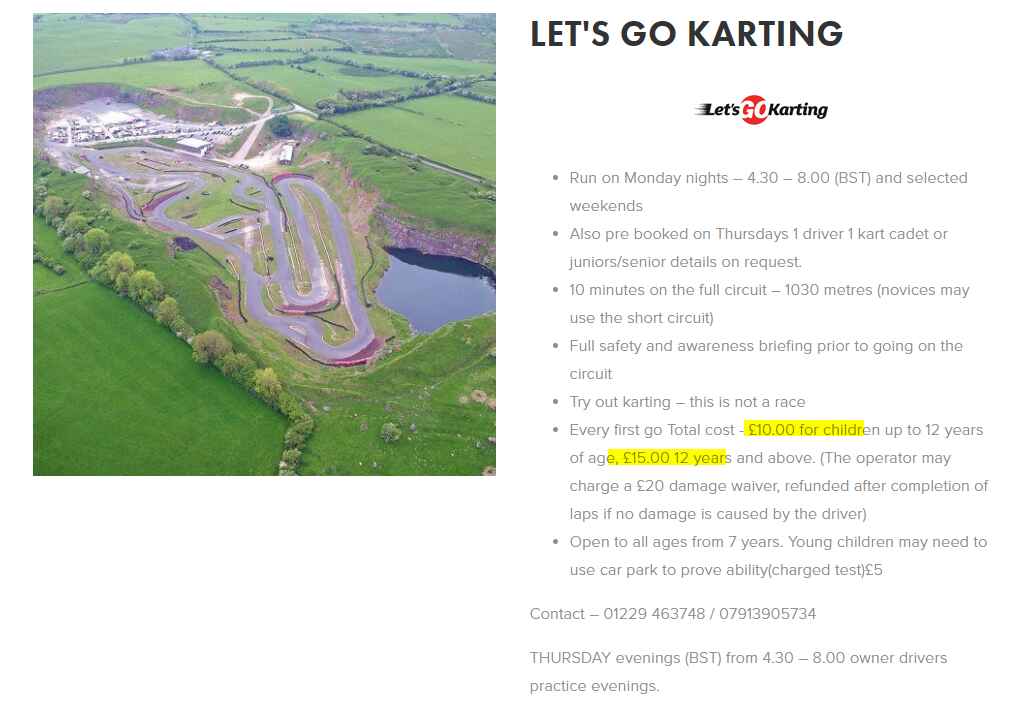