Which stand do you have?

I’m using an electric one. Back-saver.

They’re both electric. Which one do you have?

I’m not sure about brand. I’ll find out.

I am using a Kartlift, was at my door 2 days after ordering and has been a life saver ever since I got it.

I been using a Kartlift for the last 8 years. Wife said she would no longer help lift the Kart. OK, being 61 years old it has helped me too.

What exactly is favourable in the dalmi hookless over the kartlift and streeter super lift?

I’ve actually got the original KL that uses a jackscrew to actuate the lifting action from the motor. The newer e-stand designs seem to have converged on the dual “ribbon” reels to drive the lifting action, including both the new KL stands & the Dalmi.

The hookless stand really just holds the kart up directly on the frame, & allows for removal of the rear bumper while lifted, if need be. I wouldn’t say the feature is a deal-maker/breaker, but rather a clever take on the tried & true bumper hook method. They’re a pretty nice stand, which should be expected for the price.

Built my own lift.
lighter than anything on the market.
Easiest of hand cranks 12 turns to lift 200lbs.
My wife says I need to sell plans 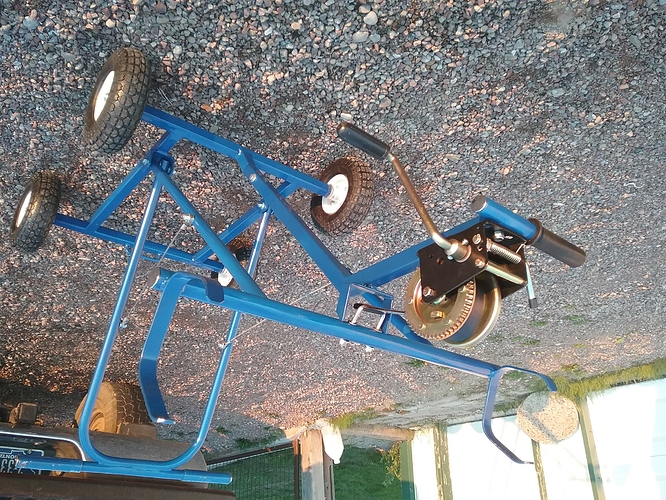 That’s a great idea. What do you think something like that would cost? The electric ones are pretty expensive.

Not only is that awesome but it’s anti gravity as well… Thats amazing.

Ya, I do a better job in my shop than on my computer…

I really wanted an electric when I designed mine. I REALLY wanted an electric.
Now that I have seen one in our club it seems ridiculous. Weighs enough that the user needs a lift for it. It costs as much as a Yugo. When it isn’t working it is an anchor. And the guy standing there while it grinds away looks like a pompous dork.
Just an opinion…

Well I agree the electric ones are heavy and kind of dorky looking. That said, we look pretty silly zipping around on our butts in karts already.

Well I may be a lightweight, but I still outweigh my e-stand. As for aesthetics, it’s a stand. Function over form.