I want to get started in kart racing next year in the TAG masters class. I’ve been reading as much as I can and studying all of the forums to learn as much as possible, but overall my knowledge is limited because I haven’t been out there yet.
I came across a great price on a 5 year old kart, but the seller also bought it used, never raced, and doesn’t know much about it. Typically I wouldn’t buy something I didnt have all of the information on, but he’s willing to sell it so cheap.
What I do know is it’s a 2014 and has a woltjer iame engine. However, I don’t know if it’s a leopard or x30. I just have this one picture of the engine right now and hoping somebody can help me identify it to help in my decision on whether or not to buy this kart.
If anyone can tell from this I would appreciate it a ton! 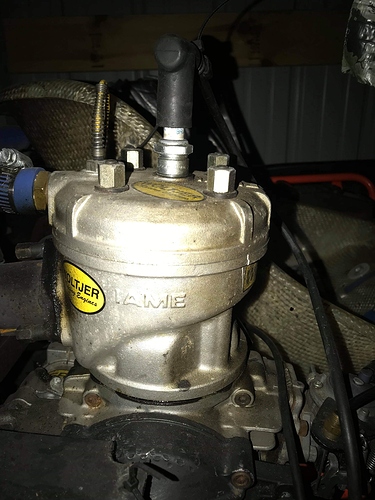 Welcome. That’s a Leopard that you have there.

Thank you!
Do you think that would be a competitive engine with a 10lb break on min weight over the x-30? Even at a great price I don’t want to get stuck with something I end up hating.

Leopard can be competitive with X30 at those weights. When TaG was run combined at more places, that was basically where the weights were at and it was reasonably close.

Note that the Leopard will be slightly less reliable and you won’t be able to race it at as many places anymore, as the X30 has phased it out somewhat, but it’s still a good engine and parts are still readily available.

I just got racing again this year too. Didn’t do any research and thought TAG was still a large class here in the midwest. I have been running the TAG Masters this summer–mostly at Badger Raceway in Dousman. I was all by myself yesterday on the track. There are not very many guys running this engine package anymore. The most I have raced against this summer has been 6.

Now yesterday talking with the guys that run our TAG masters series–there is talk of starting at TAG100 Masters series with the KA100 engine. They are also pushing to get the ROK VLR --Vortex version of the KA100. That engine package comes in a bit cheaper than the KA100 package.

@tjkoyen–do you have an insight on the ROK engine package?

Here’s a bunch of posts comparing the two: The Great Debate: KA100 vs VLR

Right now the only reason to get the VLR over the KA is initial cost is lower on the VLR. Otherwise, the KA appears to be faster and possibly more reliable, though they are both pretty close. From what I’ve heard, the KA is better at most tracks by a tick, but the VLR can hang with it if the track layout allows it.

KA is big in the Midwest right now, and growing. It has the biggest grids at the regional level, a decent club following, and big national grids as well.

Kevin, if it’s a smoking deal remember to ask when it was last rebuilt. There might be 500-1000 of rebuild waiting.

Great insight, everyone! I’m going to forgo the TaG cart this year and start out with the LO206 for my first season per the advice in another thread. I still may pick this cart up if he doesn’t sell it in the next month or so and I can get an even better deal. The chassis seems to be in great condition and if the price comes down much more I think it will be a steal just for that. Might be nice to have to take it out for some practice runs anyway. Might as well fill the garage up with karts since my wife is already super excited about the new hobby

Kart dates with wifey are the best dates.

I think a 206 is a good way to go for racing to start off… and many continue to run for many, many seasons…

Even though you’re mechanically adept, you have to ask yourself how much do you want to wrench on things vs drive the thing. 206 by far gives the best effort/reward there, you sacrifice some speed but you gain other advantages too.