Recently I had the header on my old IAME Easy Kart 125cc air cooled engine break. It separated right at the flange. The flange stayed bolted to the engine, the header tube separated from the flange but stayed attached to the flex and muffler. The muffler flipped over and became wedged between the tire and the side pod.
So, all of this brings me to an observation and question.
I have been using a flexible flex between the header and muffler since running the 125. The last two races I ran a solid flex. Is the solid flex more likely to cause broken headers?
I used to run solid flexes on my old PCR reed valve 100cc motors years ago with no problem.
Any ideas?
Also, would brazing be a strong enough repair to the broken header or should I get a new one? 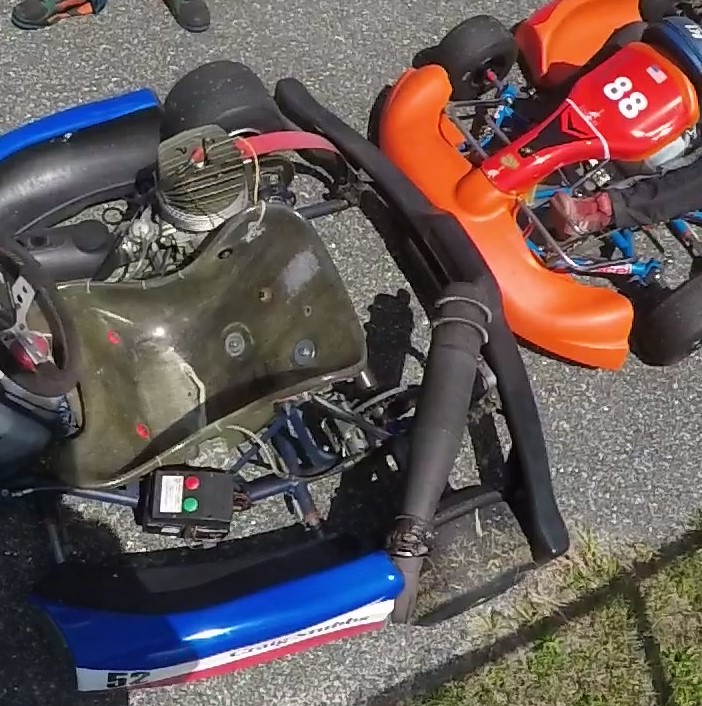 Personally, I would just a new header, but I’m lazy and just replace parts so I can mess around with the broken ones later.

First of all, yes solid flex has a tendency to break headers. We’ve seen it many times since we started running Leopard back in 2008. It’s not as big of an issue on the X30 since the engine doesn’t vibrate nearly as badly as an EasyKart/Leopard engine. We always run flexible flex.

And yeah I would just replace the header as Davin said.

Personally, I would just a new header, but I’m lazy and just replace parts so I can mess around with the broken ones later.

I agree, I’m stingy and would still replace the header. Regardless of whether you have solid or flexible flex, do the best you can to ensure there’s no stress\load on the system, especially if you’ve moved the motor and or changed sprockets. If you have the time, pull the springs off, make sure the system sits nice the the cradle and re-apply the springs.

Thanks, guys.
I appreciate your input.