Well, I did it. I gave road racing a try and it sure was a blast! Having done sprint racing for years, as well as a few track days, today’s road race at Laguna Seca was very similar but also a much different challenge. Being that this was in my kart and not my dad’s BMW, I knew I would be able to push the kart more so than I do in his car. But, it was also a lot like a track day, at least for what I was racing.

Racing a Yamaha, a low HP for road racing, I assumed that I would be able to take the majority of the corners flat out, which ended up being a correct assumption. What I underestimated, though, was how much commitment it would take to do so. It took me pretty much the whole first 20 minute practice to mentally commit to turning in at full throttle. Every lap of that first practice session I’d go a little deeper before lifting and get back on the gas earlier and eventually that met in the middle for full throttle. For the corners I did have to brake for, I was amazed at how late I could leave my braking. I can only imagine what it might be like pitching a 125 with front brakes into a corner. Some day maybe.

Ideologically speaking, I think I’ve been converted to road racing. But practically, I don’t have the money for what I’d want or need to make the full switch.

That sounds like a blast. I am guessing the speed is seductive.

Welcome to kart road racing, it’s a blast! My first experience RR was at Road America in a Tecumseh Star class (modified big block L-head on methanol). Completing my first lap in practice and entering corner one, I lifted. Almost immediately I got hit from behind. After the session was over, the guy that bent my bumper found me. He asked what happened in turn one? Not knowing, I said I lifted. Then he gave me some advice “you don’t lift for 1, you take your left foot and put it over your right foot to keep it down”
I’ll always remember that and share the story when I can. Still makes me laugh.
I truly love road racing, the speed, sound and smell of a three day race weekend is awesome. And if you can camp at the track, even better. 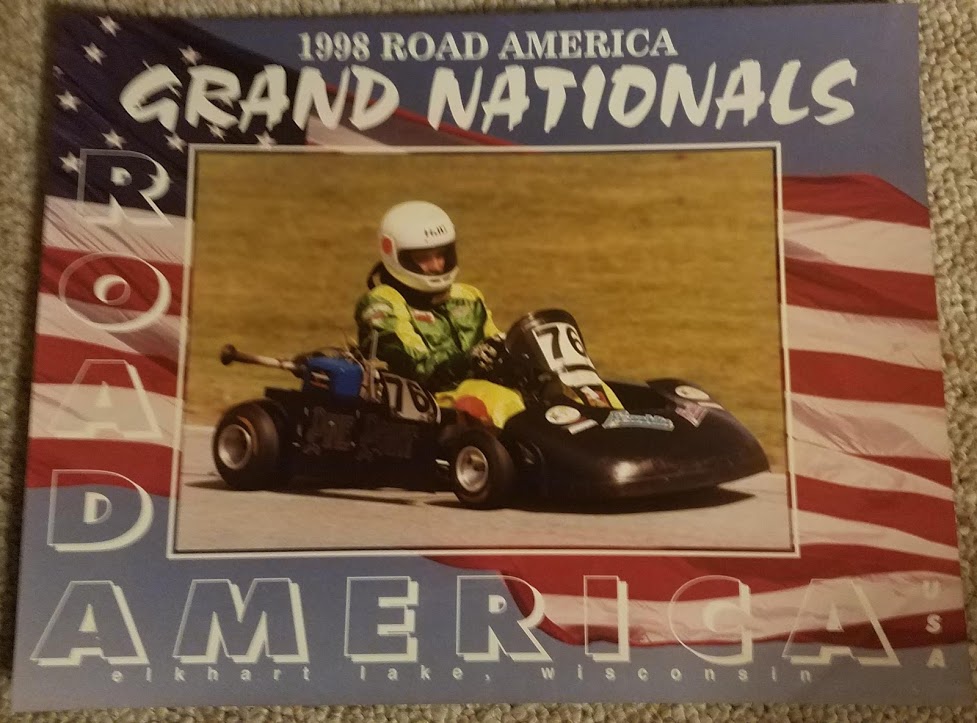 Back when we could run open exhaust. Notice the aero number plate…lol

What I enjoyed about the corner speed, relative to sprint racing, is the sustained corner speed and having to hold the kart all the way through, whereas in sprint racing, most corners are over pretty quick. Since my dad and I have done track days together at Laguna Seca in both his M Coupe (previous car) and M235i (current), he was curious what I thought of it relative to a track day and asked if the track felt huge in the kart. It honestly didn’t and there were some corners that were more fun in the kart and some that I prefer in the car.

Until I knew I could go flat out, I was definitely trying to be extra aware of leaving a lane for faster karts, if they were to ever come up on me, and if the racing line moved from one side of the track to the other, I’d do so in a smooth, slow, predictable manner.

That is so cool. Who doesn’t love Laguna Seca?
Quick question: given the size of the track, was it just a “cruise” or are there any bits where you are at the limit?

Laguna has a handful of tighter turns. Especially at the end of the long-downhill front straight away - a hairpin followed by successive 90º right turns. I don’t imagine it to be much different than other kart road-race venues.

Granted, keep in mind this was in a Yamaha, but the two most boring spots for me were turns 1 and 7, both corners that are adrenaline pumping for me in a car, because it a kart, you’re just cruising up the hill. All of the corners that are flat out, especially 9 and 10 coming down the hill require a lot of commitment and strength to hold the kart smoothly through the corner. Turns 2, the double apex hairpin, turn 8a, the left of the Corkscrew, and turn 11 were most similar to sprint karting, having to brake hard, turn in, throttle early

Cool. I should try in project cars! What laptimes?

Glad you liked it. For comparison, some Laguna Seca videos from other classes:

What I’m curious about is the entry numbers. It’s fantastic that NCK is able to get a weekend at such a prestigious circuit as Laguna Seca, when it’s so hard for kart clubs to land any open spot at a full-sized road course. I hope it was well attended.

What I’m curious about is the entry numbers. It’s fantastic that NCK is able to get a weekend at such a prestigious circuit as Laguna Seca, when it’s so hard for kart clubs to land any open spot at a full-sized road course. I hope it was well attended.

I heard someone say that it wasn’t a great turnout but I have no way to substantiate that. What I did hear straight from NCK during the driver’s meeting is that this was probably going to be the last event at Laguna Seca for at least a few years. NCK loves racing there, but with the upcoming upgrades at Laguna Seca in preparation for the IndyCar race, everything is getting more expensive to run there.