FOX and Race suits, Why not?

Just wondering why companies like FOX haven’t started making race suits. Or have they?

Tiny market for the investment required.

I went looking for Fox race suits and stumbled across this which is rather neat. It does not help, unfortunately. New, vintage suits!

Fox actually did in the 2000s under the Shift brand. As a former motocrosser I was bummed to find out that chapter was over when I started karting. 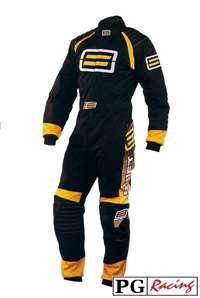 I snagged a blue Shift Apex for $75 on clearance by dumb luck when I went hunting specifically for one online some years back. It’s a quality suit, & the 1st I know of with a level 2 rating to hit the market at the time. Wish they hadn’t folded the brand.

I guess they don’t want to pollute their brand image which is super strong right now. Car/kart racing isn’t as ‘lifestyle’ orientated as MTB and MX and may not fit within what they are going for. For want of a better word… karting and car racing isn’t ‘cool’. A better phrase might be not as culturally extensive.

Like TJ said ROI is probably not that great either. I imagine FOX make a lot of their money from the lifestyle stuff supplement the safety gear sales too. So in terms of investment you’d have to factor what additional revenue car/kart suits would generate above the actual products themselves. Additionally difficult when Alpinestars have a lot of that market already locked down and even they tuck a lot of their 4-wheel stuff away on their website and socials. Bikes are overwhelmingly the driver of their marketing.

I didn’t know they were associated with the Shift brand, but I guess that’s indicative of wanting to keep the FOX brand at arms length.

The lack of lifestyle in karting is one of the hardest things for me coming from moto. It just doesn’t feel like the dedication is there.

FOX created Shift as a sub brand in 97 to be able to support the wilder image of freestyle motocross.

It doesn’t hurt to have big name manufacturers supporting your sport, either. Brand name recognition endows a level of market & product security, which enables growth. “Cool” being relative to popularity, well-established markets win more appeal. That said, everyone I’ve ever shown a kart racing video to thought it was “cool”. I have yet to experience otherwise.

TM makes well known MCs, so there’s some crossover name recognition there, but in the US, how generally well known are the mainstay brands in karting? It’s unfortunate that karting doesn’t get a ride on the promotional coattails of F1, given its growing popularity in the US. There’s enough visual similarity & analogous performance, particularly at the high end of karting spectrum, to generate buzz. But the finances for that level of marketing are leagues out.

The lack of lifestyle in karting is one of the hardest things for me coming from moto. It just doesn’t feel like the dedication is there.

Dirt bikes have a utility beyond racing. You can race them, you can take them to the top of a mountain and traverse massive landscapes or you could use them as your daily commute vehicle. So the ‘lifestyle’ aspect to karting is a lot more focused towards racing and only racing. Even if you do karting recreationally and don’t race you still are within the context of the racing environment as the tracks and so on.

In addition MX and SX have a clear defined structure (250f/125s and 450F/250s) that allows the sport to be largely cohesive and means you get a hierarchy within the sport. That helps drive discussion because you get your Barcia fans, or whatever. In karting we have multiple different classes, multiple different championships whereby they dilute each other. Car racing gets away with this but the categories of different enough to somewhat avoid this. You can’t really be a fan of any particular driver/team in karting. Barely anyone I know in karting could name the current World Karting Champion. In karting I’ve never seen a contemporary debate about who the best drivers are and their traits like I do with the SX/MX guys. This is partially why trying to sell ‘life-style’ products in the karting context at least is quite difficult. For a company like FOX I imagine this is important. I dunno

Bike racing in general is more tightly connected to a ‘lifestyle’ thing even with MotoGP. Like, an R1 road bike isn’t a million miles away from an M1.

But the finances for that level of marketing are leagues out.

btw I should add I have attempted to take action and correct all these things in karting, but uphill battle barely begins to describe the effort it would require to do it successfully. it isn’t helped by the control the manufacturers have in terms of all this. If it did become popular that might incentivise Rotax to come back into elite level karting and spank their arses again