I’m racing the Pocono Raceway East Course next weekend with the F-Series. Wondering if there are any road racers that could give me an idea on gearing for a Leopard on a car track. Just trying to get in the ballpark. Thanks.

I can recall running a 16tooth driver I can say that much.

@Tony_Z I think you guys ran mostly Rotax in road racing, any ideas?

Thanks for the response.

I’m not sure what to make of this track, it’s only listed at 1.1 miles, but it’s still the width of a car track, a 1,600 ft straightaway, and very little lifting I’m assuming. It’s nothing like the sprint tracks I’m used to, but not quite a full blown road course.

Yeah it’s a hard one to gauge. Put it this way… do you have some 15/16 tooth drive sprockets?

Thanks James. With the Leopard, on a two mile road courses like Blackhawk Farms in Beloit IL we ran either a 15 or 16t driver with and axle gear from 70 to 75. I’d say the 16 driver would be too large for Pocono with that 180 deg turn. My gut wants to say to start with a 12t driver and a mid-70’s on the rear and see what happens.
Hopefully someone with experience at Pocono will have a better answer. Good Luck.

Thank you so much, that’s what I’ll do.

Do you have a map of the track and direction are you running? If your NASCAR Turn 1, that’s a long ways around. The way I’m looking at picking a gear ratio is start with the drive gear, as that will be your largest jump is gearing. Then you can fine tune with the rear sprocket to dial it in.

Trying finding out what the top speed from other racers in the class are, then you can work backwards to find where you should be for gear ratio. I attached the gear ratio spreadsheet I built, download it and input your tire diameter and MAX RPM to adjust the tables. Let me know if you have any questions.

This is the course, 99% sure it’ll be counterclockwise, not utilizing any part of the oval. This race is apart of the GearUp F-Series, a sprint race series, so it’s not a full blown road race. The track isn’t super long but it’s still very wide and fast, so I’m likely to go with Tony’s suggestion and start somewhere around the 12/75 range and go from there.

Ok, so you’re not even using road racing course at Pocono. For road racing, what your showing is where we park trailer and use kart track as access road. That does look fast. 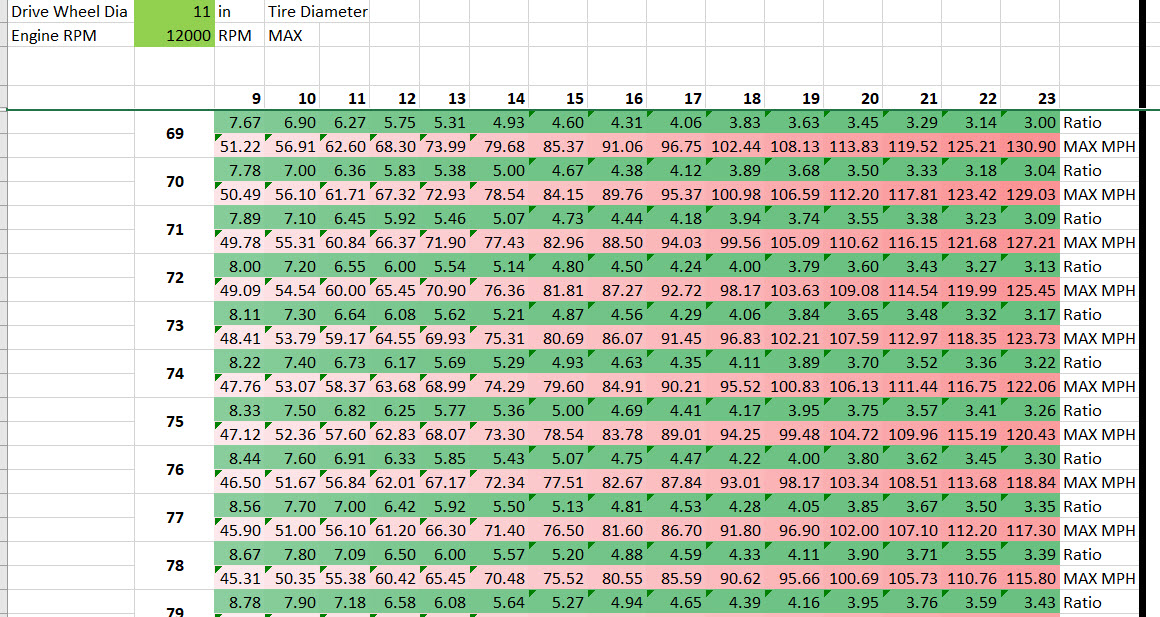 Have fun at Pocono at let us know how it goes. I’m going to have to miss that race, alas.

You’ve got the RPM set at 12k though and youll be revving more. @Tony_Z what kind of RPMs did you run on road courses.

I know it’s not nearly as high a sprint, so maybe this track will be somewhere in between. I would imagine 75mph absolute minimum in a TAG somewhere around 15K. Depends on the RPM drop in that right turn.

Thank you very much, will do.

That’s a fair assessment to me. We ran high 15s at 78mph with an 11 driver last year at New York Race Complex which is super wide open for a sprint track, we’ll probably aim for slightly lower revs, and should be faster on the top end at Pocono.

Rob,
Your approach is good but slightly flawed. You may not yet have the same driver’s skills or chassis set ability as the person who set the fastest time. You can work backwards from that driver’s terminal velocity to set an initial gear ratio, but be prepared to add teeth on the axle. When you do add teeth, add a minimum of two teeth.
Theory flaw. The driver who set the fastest speed had a well handling kart and was able to carry more speed out of the last turn onto the straight plus accelerate sooner. Terminal velocity is one thing, but you only have one gear ratio during any given lap. You still must negotiate the tight turns in the coarse and a Leopard clutch isn’t going to help you much. Another thing the record books aren’t going to tell you are the track conditions for that day, the tire used or whether there was a draft involved or not.
After all that said, slap on the gear you think is the best for you, go out and have fun, adjust. Repeat.

First, not a 2 cycle guy, so I took a guess at the RPM.
Second, the tables are meant to be used as a starting point. Looking at a gear ratio will be get you the top speed in a straight line. Then like what @Tony_Z said, driver ability, track configuration will play a roll in achieving the top speed for the ratio picked. But it should get you close.

My approach for gearing is to pick the clutch sprocket before leaving home that gets me into the ballpark of ratio(s) I want for that track. Then I tweak the axle sprocket to move up and down in ratio.

Starting with the 12t drive sprocket and then make sure there a good range of rear sprockets, I think that will be a good place to start.